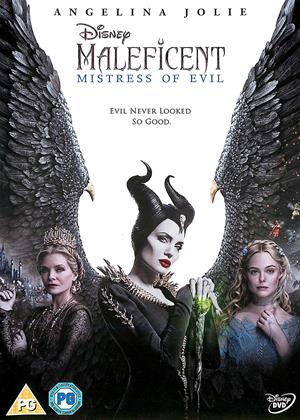 Reviews (8) of Maleficent: Mistress of Evil

Save the Jolie. - Maleficent: Mistress of Evil review by NC

Sequel film to ensure Jolie still can pay the huge bills she must have.....for surgery etc. Not quite as good as the first film, but is a bit of fun. The kids films are certainly a tad different to Lady and the Tramp etc!

Not as good as the first film but watchable if you've nothing else to do. Angelina looks too digitised, and the story isn't the best.

The first film was really well made and great thought was given to the CGI and Special Effects, photography storyline and action. This film feels like it was made simply for the sake of cashing in and offers very little in the way of entertainment or surprises. It really just re-hashes so many themes that have all been done before. It really comes across as yet another tired old Marvel Comics re-hash, of which Disney now own the rights! I thought it was very slow and really was quite tiresome to watch. The themes which it tried to cover very badly, were so worn out and the script was very poor, as was the direction and CGI. An ok film for the kids to watch on a Sunday afternoon, but not a patch on the original!

Watchable during the lock down - Maleficent: Mistress of Evil review by AA

1hour 53 minutes of entertainment to keep me going during the COVID19 lockdown, with action flowing at a steady pace to keep one focused.  The story line at times was weak but with enough action sequences to over come that, plus a host of animated UK actors playing their part in keeping to action moving.

not bad - Maleficent: Mistress of Evil review by LS

I actually enjoyed it, apart from Angelina Jolie's annoying accent when she actually talked. Michelle Pfeiffer was good as the evil queen and overall, it was a good movie for kids.

One for the Kids - Maleficent: Mistress of Evil review by Spicy Simon

It got off to a pretty good start but a little over half-way in, the story become less and less convincing and more and more disappointing. It was increasingly a case of: put in the elements that people like and hope for the best.

On the other hand, even from the start it felt that the movie wasn't really aimed at me: much better for children. For example, the menace that was in the first film has been softened in this one.

Too good for kids - Maleficent: Mistress of Evil review by RD

No doubt as this is a Disney film it will be assumed it's for kids.

But calling it a kids film is underestimating it.

I thoroughly enjoyed it.

I liked the way it branched out from the first film's story line.

A poor sequel to the surprisingly fun and interesting 2014 original. The fairy tale roots have largely been discarded here in favour of a Marvel Universe type battle narrative, a sword & sorcery fighting film with the predictable storyline throughout. Angelina Jolie reprises her role in the title character but we see rather too little of her and when we do it's only in CGI mode. This time around we are given Michelle Pfieffer as the villainous mother of Prince Philip (Harris Dickinson) who loves Aurora (Elle Fanning), proposes to her, is accepted and the union designed to unite their two lands. But nasty ol' Michelle has other ideas! Then Maleficent discovers there's a whole race of flying people, like her, but without the magical abilities. Ultimately they all pull together to foil the evil plans of the Queen. This is fine for the kids on a rainy afternoon, but really a big disappointment and somewhat formulaic. The cast are great but ill used including Chiwetel Ejiofor, Ed Skrein, Robert Lindsay and Sam Riley amongst many so if you liked the first then don't bother with this one it'll spoil it.

The sequel to 2014's Maleficent would seem to be a more pleasing upgrade from its dour predecessor. Free from the grim garnish and rape allegories, here is a film where the titular witch can literally spread her wings. When she does, however, a more colorful picture takes flight, yes, but also a more tiresome tale of colonialism most bland.

This is rather depressing considering how strong of a high note the film opens with. Princess Princess Aurora (Elle Fanning), now the princess of the Moores, is quickly falling in love with Prince Phillip of a more armed kingdom. Their territory had once been at war but maybe a marriage would cool the fires of hatred.

The announcement of the wedding itself has done little to cool the feathers of the winged witch Maleficent (Angelina Jolie). Still bitter about humans after her brutal breakup with a king, she is not keen to let her daughter get married to a human. But Aurora is her adopted daughter and she is still a softy for having such pointed horns. She’s willing to stifle a smile if it means the happiness of some she has raised since she, well, you know, cured her.

The dinner to celebrate the marraige at the more civilized kingdom has its brilliant moments considering how Phillip’s mother, Queen Ingrith (Michelle Pfeiffer), despises creatures of the forrests. Their banter about kingdoms and questionable actions is hilariously awkward and biting that I wished this would be the entire movie. Of course, it won’t be. We’re shown very early that Ingrith really enjoys a good war and that the current peace isn’t sitting well with her. We see that she is preparing for war with her secret armory, laboratory and general distate in the King who favors peace. Should we really be surprised when it turns out she stages a scene to launch the kingdom into war?

Out of nowhere, the film pulls out a more left-field surprise; there’s an underground world of more creatures that look like Maleficent. They all have wings and horns, driven underground by the humans who forced them out. They can’t trust the humans and believe they should take back the land that was once their own. If this sounds too on the nose for being a film about colonialism, they’ll beat this point home in a scene where Ingrith calls them all savages with the very next scene featuring them all in war paint and beating their chests in a war chant.

There’s familiar shades here of the likes of Dune, Dances With Wolves, Avatar, etc. The big difference is that those previous films took their time so that we understand each side to have value in who wins or loses. So little time is spent with either the magical creatures or humans that there’s little stake in caring who will win this battle. We just have to settle for a few characters we know of basic traits for a few scenes being angered and sad that their comrade perished in battle. Even familiar characters from the previous film are killed and I still feel little for them with such a lack of focus and development.

Mistress of Evil is so unneeded in how it taps into such a tired scenario for more fantasy fair. Rather than harp on how tense the relations are between magical creatures and human, this film falls back on such an old and tired battle of colonialism that never comes off as unique. Angelina Jolie still looks remarkable as this kind of villain and it’s neat to see her slip back into her evil ways, but it’s filtered through a rusty lens.