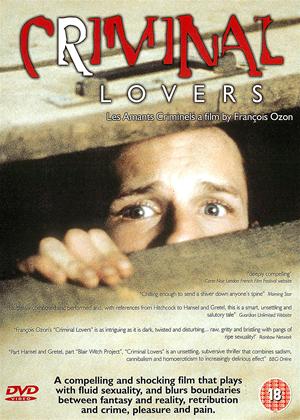 Synopsis:
Once upon a time in a Paris suburb, there lived a teenage girl named Alice, a pretty girl who liked to play games of seduction and violence. One day, Alice decided to killSaid, a handsome and cocky classmate. But she couldn't possibly do it alone, so Alice manipulated her naive new boyfriend Luc into committing the cold-blooded crime as proof of his true love for her. It wasn't as easy as Alice had expected. Murder can be messy and so tiresome. Alice thought she had carefully planned everything. But a life of true crime can be filled with many difficulties.
Alice and Luc go to the forest to bury Said, but they get lost and find a boat that carries them deeper into the woods, and to the home of a lonely woodsman. ice and Luc soon discover that life is no fairytale.
Actors:
Natacha Régnier, Jérémie Renier, Miki Manojlovic, Salim Kechiouche, Yasmine Belmadi, Bernard Maume, Jean-Louis Debard, Catherine Vierne, Marielle Coubaillon, Olivier Papot, Gil Demurger, Agnès Accaria, Ranzi Adjeri, Brigitte Albuquerque, Martihino Albuquerque
Directors:
François Ozon
Writers:
François Ozon, Marcia Romano
Aka:
Les amants criminels
Studio:
Millivres Multimedia
Genres:
Horror, Thrillers
Countries:
France

Alice is inconsistently perverse. She doesn’t mind seducing and killing, and can even fall asleep next to the body of the victim, murdered Said, whilst waiting for her partner Luc to provide her with a getaway car. She’s not bothered about robbing a shop in broad daylight – but when Luc runs over a rabbit in the road, she’s devastated.

This is a French film about two impetuous youngsters who, whilst burying the deceased Said in a forest, get lost and take refuge in a cottage, where a hermit called Karim takes a fancy to Luc and has an intense dislike for Alice. At first, it is assumed Karim is feeding Luc because he wants to eat him. He says he prefers his women ‘dry’, hence Alice is kept in the cellar, starving with the rats. But it soon becomes apparent the recluse has more intimate designs on the boy.

It is an obvious declaration to make, but there is always a feeling of the (excellent) actors knowing far more than the viewer. Alice’s jealousy of Karim and Luc’s relationship mirrors Luc’s similar feelings when watching Said and Alice earlier on – but who is Luc jealous of? Whatever the answer, the intimacy between the two men awakens Luc’s sexual desire (at last) towards a grateful Alice, which is granted following their escape.

Finally, the heavy-handed police capture Luc and kill Alice, presumably for Said’s death (Alice wrote her murderous exploits in a diary, left with Karim) – and then Karim himself is arrested, with Luc proclaiming the man’s innocence whilst being driven away in a van.

The meaning behind this curious tale is left to the viewer. There is a certain adult fairy-tale quality to it. Certainly the forest where they end up has a mythical flavour, with hedgehogs and foxes scampering around as the youngster consummate their relationship. ‘Criminal Lovers’ is odd and unfathomable, unyielding and tremendously well-acted.