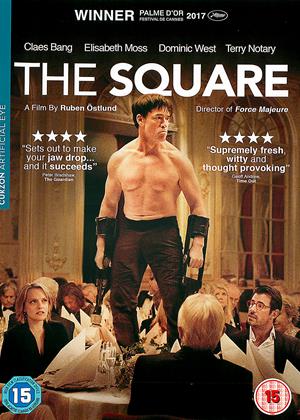 An Excellent European Satire upon the Human Condition! - The Square review by CS

I actually enjoyed watching this film, but it's not for the wham bam thank you crowd, who will probably find it boring. This is more of those who enjoy a well crafted, well thought out storyline. This is in effect a series of short plays all brought together by the central character, the Curator of the Museum, played by Dominic West. Billed as a satire, but very dark in some places, this is an assessment on human morality and how people behave in certain situations, such as when the Ape Man appears. I thought it was a very well thought out and honest film, exposing much of our inner selves, although there are a few holes in the plot and sometimes it goes off at a tangent in a direction other than what one is expecting. This is a satire on the human condition, it is not a comedy, as some people wrongly seem to think! My only disappointment is that this is billed is having a choice of English, Danish and Swedish Languages and English Subtitles, that is incorrect. You have no choice, the film is spoken in all three languages and when spoken in Swedish or danish, you get English Subtitles, however when spoken in English, there are o Subtitles, which makes it very hard form someone like me with a hearing loss! So if you are Deaf be aware that there are no English Subtitles for the Hard of hearing!

I got so bored with the film I ended up using the fast forward button to finish it quick. If there was satire it missed me completely.

Contemporary Cinema at Its Best! - The Square review by TE

This is a superb film that repays second and third viewings. Ruben Ostlund is developing a fascinating line in examining the uncomfortable moral questions in contemporary life.

The overall narrative strips back our attitudes and values about shared public spaces, and within that structure are a series of smaller satires on modern urban life.

The extras include revealing interviews with Ostlund and the principal actors and are well worth watching. He certainly seems able to get brilliant performances from his cast.

Some familiar themes from Ruben Östlund's other work are quickly recognisable here – embarrassment, guilt, male insecurity and the fact that no code of etiquette or morals can ever prepare you for the ridiculous and perverse situations that life throws at you.

There are two main threads to the story – one is Christian and his colleagues preparing for the opening of a new exhibition, whose theme is to be kindness and trust. We witness a press conference, the team planning a promotion strategy, and later, the fall-out from a disastrous viral marketing campaign. The other strand is when Christian has his phone and wallet stolen on the way to work. Using the tracking device installed on the phone he locates the thief’s multi-storey apartment building – but he doesn’t know the thief's exact address. His co-worker Michael tells him he should post a letter to every flat threatening unpleasant consequences if the items are not returned. When Christian voices doubts, Michael tells him to "stop being so Swedish" and that "now's not the time for political correctness". The plan works but their actions have unintended consequences later on.

I liked the central character, Christian - he is polite and considerate to others, takes his professional and family responsibilities seriously - but is believably flawed, prone to occasional outbursts of passive-aggressive behaviour and denial of responsibility. One of my favourite moments was when a homeless woman in a diner asks Christian to buy her a chicken panini without onions. He orders her the panini, onions and all, saying "take them out yourself!"

The film is elegantly photographed, with excellent use of light, and makes good use of the large interior spaces – notably in the “apeman” performance art scene in the banqueting hall which you have seen in the trailer. Some may find it slow-moving; it’s not that any of the scenes feel redundant, but they often seem to progress rather slowly, with static long takes and rambling conversations, so that at times it almost has a mock-documentary feel to it.

Watching it at the cinema I found the slowness and the lack of a clear-cut ending a bit frustrating, but it grew on me afterwards. It makes you think about the value of modern art whilst gently poking fun at the wackier side of it, and asks us if it is possible to be a good person in an increasingly fragmented and chaotic world. Yes, it's very much a film about middle-class problems, but I can't imagine a better film about middle-class problems being made this year.

Bit like the Japanese cartoons, you get it or you do not.........alas i do not see the angle on this film being clever/interesting. Was not really bothered about the characters at all. Self absorbed arty crafties, living on the excess of western world................

Frivolous and tedious - The Square review by TR

This is supposed to be a satire on the art world, but yet again we have a film populated by self-absorbed, reprehensible and uninteresting types, except for the angry lad and the ape impersonator. Stereotypes are brought in when an already flagging story is seen as needing a "lift." Also, watching the story develop feels like wading through treacle. I thought satires were meant to be sharp, this is about as sharp as a plastic spoon.

Intelligent and interesting - The Square review by JD

Well worth the effort of spending two hours watching this very creative and absorbing movie.

I will admit I did not fully understand every little episode, but that is part of the fun !

Excellent acting from all the cast and so good not to have to watch special effects and cgi to create a sense of atmosphere.

I recommend this movie to all who like a thinking, creative, funny at times, sad and scary too.

A rambling film; anti-masculinity, be nice to immigrants, spread wealth about more fairly (I thought Scandinavian countries did that already?). A good old liberal arty outing. Sadly it rambles too much; 2.5 hours turned out to be irritating torture.

It won Palm D'or award which tells you something. You will be scratching your head through most of this unengaging tale. Find something that actually tries to entertain instead of giving a lame, hard to fathom lecture. Thumbs down.

Art installation masquerading as film - The Square review by Alphaville

The film started as an art installation and it shows. It’s even a satire about that same art installation. Like much of modern art, it’s little more than a concept that fails to materialise into anything worthwhile. It’s the kind of minimalist European cinema that wins awards at film festivals (step forward in shame Cannes) and has you puzzling why. Long, static camera shots of documentary-style talking heads make for a tough and pointless watch. More for the emperor’s-clothes art crowd than lovers of good film.

For me, it was a story with some similarities to 'Bonfire of the Vanities' - where the upper echelons of society have a fragility that can come unstuck very easily, when interacting by chance with the underclass - in this case, via the robbery of the leading character and his persistence in following it up. I had an abiding feeling of insecurity in that there was always a chance that Christian (and his daughters) could come to a sticky end - see the film to find out.

There was an interesting style to the cinematography - where speakers and 'noises off' were substituted by views of the listeners reactions (or lack of). The film also had a kind of abiding 'chill' about it, where the outward sophistication of those in the world of arts were subject to a degree of murkiness and sleaze, always just below the surface - maybe a reflection of real life?? Overall, were they speaking Danish or Swedish? I could never quite tell....

Very overrated and boring (this review contains spoilers!) - The Square review by RH

This film would have been much more effective had it been kept simple and stuck to being a satire of the modern art world. As it is, it rambles into too many other themes that don't really make much sense all together in this context and make the film far too long and boring. I also found the scenes with the little girl being blown up and the woman being dragged across the floor by her hair were a bit unnecessary, bordering on misogynistic, even though I get why they were there within the context of the storyline. On a slightly more positive note, there was some very good acting overall but even that couldn't redeem this film for me.