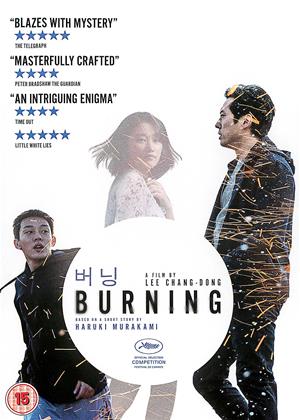 beautifully shot wonderfully acted, starts as a meditation on class and opportunity and relationships then becomes a sinister thriller halfway through

This is an interesting -- captivating, even -- film, but it is also a weird movie in more ways than one. I wouldn't describe it as a thriller because it doesn't fit into that genre as such, although there is a mystery at the heart of the plot. The film is quite slow and too long, and yet it is fascinating, because there are so many ways that you can interpret the opaque story.

The central character who lives on his father's farm is, somehow, a bit gormless. But it's possible to identify with him and his sense of bewilderment at what goes on around him. On the other hand, there is something frustrating about the story because some obvious questions that ought to be asked are not touched upon, hence we are not provided with answers (which is deliberate on the part of the director, of course). What I mean is that it is rather implausible that any of those key questions wouldn't have been asked and the person or persons involved wouldn't have been put on the spot as part of that questioning, in any real-life situation approaching that described in the film. (I cannot say any more, to avoid spoiling it.)

Then again, the film is totally unconventional and does not pretend to be realistic as such. It is an atmospheric and oniric sentimental drama inching its way slowly towards some kind of thriller, South Korean style.

Sorry for the pun in my title but this really is a slow film which is set to the pace of life, not to the pace of Hollywood. To say much more would spoil the second half of the film. All I will say is, this is is an observation film about human characteristics. The makers of this film take a different approach to telling the more sinister parts of the story, an approach which is more realistic and far removed from how Hollywood and other South Korean films would tell the story.

Like I say, this is a slow film, and I can see why others will lose patience with it, but for me the slow pace was right. The only criticism I have of the film is that it is the film's length is far too long. Thus, I'm less inclined to watch it again. If it were to lose around 30 minutes it would become a treasure.

What’s it about? If you can figure that out, well done. It begins as boy-meets-girl, becomes a sort-of love triangle then eventually introduces the element that gives the film its title (but don’t expect any combustible drama). It’s intriguing to begin with and even looks promising, with realistic sex scenes that you rarely see in South Korean cinema. But it doesn’t go anywhere interesting at all. It’s based on the director’s short story, is full of tell-don’t-show and can’t possibly sustain its 140-minute run time. It has been vastly overrated for its opaqueness, causing some critics to say it must be seen twice, but once (if that) will be more than enough for most viewers.

This was based on a short story, and it shows. It is two and a half hours long, and in that time it manages to cram in about as much incident as a typical ten-minute short. Films need plot, character, and incident.

Plot: in the first hour, pretty much nothing happens. After that, the pace picks up very very slightly. The film is so slow and so dull that it took me four determined sessions to get through it, and two of then had breaks in. There is a duty of a film-maker to entertain, and this film fails badly in that duty.

Character: the main character is a contender for the dullest person possible. Just once in the entire film, he says something faintly interesting. Most of the time, he hardly speaks more than a grunt. He doesn't smile or emote. The main love interest is a bit weird, but she is not weird enough to be interesting. None of the characters is likeable. It is very difficult to care about a main character who so very dull.

Incident: there is precious little of this. There is no entertaining dialogue. No one does anything clever. There is no humour. Everything that does happen, happens very slowly. There is a totally unbelievable bit with a cat.

Critics loved this, and gave it several awards. How could it have been improved? Well, one Hollywood way would be to cast someone likeable in the main role, and give him sparkling dialogue, and add a car-chase. That would have turned it into a very different thing, however. The main characters are loners and that is partly why the story works, and obviously likeable people are not convincing loners. The main character comes to a slow realisation of something (I'm trying to avoid spoilers) and his slowness is part of the story. The problem seems to be in making this a feature film at all. It is two and a half hours in which each minute carries almost nothing in it, which makes it an ordeal to watch. As a short story, it wouldn't be annoying that the characters are dull, and very little is said. In a short story, the writer can describe the passage of time, and the reader can imagine it.

It should have stayed as a short story.

The plot is more of a mixture of threads, all of which meander very slowly through the film, with very little development or resolution. It becomes a very slow film, with nothing much being attempted, but little starts of what could be intriguing storylines. Well filmed and well acted, but empty in the depth of story department.

Uncaptivating - Burning review by BE

Couldn’t relate to this Korean film at all.  Not real life as you know it and failed to hold my interest. Fast forwarded it to the end half way through.  It was as I thought but won’t spoil for anybody who wants to watch it.

unintelligeable if yo don't speak the language - Burning review by MF

This latest film from the great South Korean director Lee Chang-dong involves the complicated, increasingly fraught relationships among three characters whose lives become intertwined. The story has the quality of a mystery thriller, but Chang deliberately subverts the genre to turn it into a tense meditation on what it means to live in a divided, profoundly isolating world that relentlessly drives a wedge between the self and others.

Jong-seo Jun gives a wonderful natural performance as the cryptic, inscrutable Haemi, (for example, she possesses an unseen cat and peels invisible tangerines) while Ah-in Yoo is quite brilliant as the socially awkward Jongsu. Their 'relationship', such as it as, is cleverly balanced by the wealthy enigma, Ben (Steven Yeun), and the three form an extremely awkward triangle with tragic results. And while each event expands the narrative — filling in the larger picture with nods at sexual relations, class divisions and a riven people — they don’t necessarily explain what happens or resolve the film's ambiguity.

For me, the second half lacked some of the tension of the first, and it's probably a tad overlong and repetitive, but the ending is beautifully handled and totally unexpected.

Too slow but gorgeous cinematograohy - Burning review by EA

Watching this film was soooo frustrating. Usually, I like slow-paced dramas but this was slow for no purpose. Overlong and should have been cut by at least an hour.

Lots of scenes which didnt connect to the flimsy plot, gratuitous naked scenes of the main female(one dimensional) character, the main character was blank for about 2 hours and 15 minutes and then there was a dramatic ending which came out of nowhere.

Although some scenes particularly of the south Korean countryside were gorgeous, I found the film pretentious and self-indulgent.