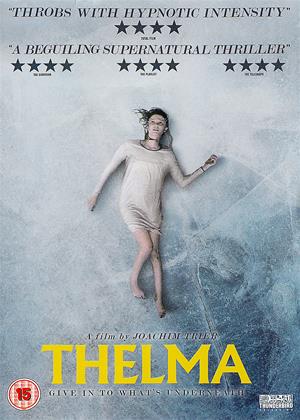 I had High hopes for this movie as it had 4 stars . But in actual fact it was pretty tedious .

A nice enough Lesbian Love story with silly telekinetic powers thrown in . Picture a Modern Day CARRIE but without the Blood or Excitement.

Too Much Christianity all through made it feel Horribly Preachy , A Very Slow Moving story , and a not very well rounded off ending.

and obviously a Mans version of Lesbian Love as both were Calvin Klein Model types as we know ALL Lesbians are ....Yeh right.

Some may enjoy this, I wont be giving it a second viewing ,life is just too short.

Well this film was so-so but the focus was all on the style as in a pop video - some tableaux are visually impressive too. But the story is basically unbelievable nonsense.

The director/writer obviously think the lesbian angle makes this original. It doesn't. It makes it boring.

Thelma on a well trodden path. - Thelma review by RP

Overly ponderous but satisfying enough. A story that seemed to have been pretty much done before. A daughter feared by her Dad but who grows up and seems fine once she finds a faith. But all is not right and its genetic. The acting does its best to mix the mundane with the supernatural and tends to pull it off. Enjoyable enough even if it feels like we have been here before.

A beautifully observed Norwegian thriller in which Thelma, a student at Oslo university, begins to have seizures. But what exactly is “seizing” her? And why are birds crashing into windows? One thing’s for sure, you don’t want to upset her because… but that would be a spoiler. Don’t expect any Carrie-like grandstanding. There are shocks along the way, but this is a more nuanced and enthralling film that draws you into Thelma’s predicament and gets creepier and creepier as the menace builds. She’s a compelling and complex heroine you’ll be rooting for all the way.

New Depths in Scandinavian Depression - Thelma review by AS

A well acted but excruciatingly boring and depressing film. If you enjoy watching lesbians, you may get a thrill but otherwise this is a plodder's nightmare.

The original part of the story is in the treatment of Thelma's supernatural powers to get rid of people who stand in her way or otherwise annoy her -- particularly if they are male. Apparently she inherited this talent from her grandmother. So Thelma turns out to be morally deadbeat as well as a lesbian.

So dark - Thelma review by JW

I don't know what to say about this film other than its beautifully dark twisted and wierd, a total must watch

Thelma: what a premise for a film. Unfortunately however, the stellar premise doesn’t go anywhere and instead patters in the same place across the whole duration of the film. That isn’t to say that I didn’t got Goosebumps during some of the more intense scenes in Thelma (which I did); but, to mark a movie better than good you’d have to have a special, for a lack of a better word conclusion that ties all loose ends and leaves you with that cathartic feeling of something very profound taking place. Thelma has none of that, and this is precisely why it’s just a very good film – instead of it being an excellent one.

Make no mistake: Thelma by director Joachim Trier is a very competently made film, which also features a rock-solid premise and stellar acting to go alongside its weirdly (almost morbidly) curious nature. And so, Thelma is a story about Thelma (Eili Harboe), a girl who seems to possess some kind of latent psychokinetic abilities which allow her to manipulate the world by sheer will. Here, an unavoidable comparison with Stephen King’s Carrie should be made, albeit Carrie has telekinetic abilities, but again the line is blurred as to which powers are being manifested and how; the similarities however are that both of these girls are suppressing their true natures in order to confront to societal norms and ultimately their parents’ wishes.

To this extent, Thelma can be read as a yield of help against these societal restrictions and allowing to let one-self’s true nature to roam freely in the world. Therefore, Thelma’s desire to be with Anja (Kaya Wilkins) goes against the principles as taught by her conservative parents, her father Trond (Henrik Rafaelsen), and mother Unni (Ellen Dorrit Petersen), as well as the Christian upbringing she was subjected to while at home (which as the majority of her childhood up to the end of her high-school years). And, when Thelma goes to college, all her hidden wishes start to come true, but not without a price.

If you entirely disregard that analogy, then you’re ultimately ending up with a girl with supernatural abilities – a superhero if you will – who only now begins to discover her abilities and utilizes them to her own gain. It’s either or, with every side of this dichotomy offering a promising start with a disappointingly empty end. If only they’ve looked more into the screenplay and worked it so that Thelma’s doings were part of a bigger conflict (internal and external both work). Instead, what we get is an entire premise that stretches all throughout the duration of the film without any real wrap.

With all of that being said, Thelma is still better than 95% of everything that Hollywood can conjure up these days, so if you have the chance, I can’t stress enough to see this film at least once.