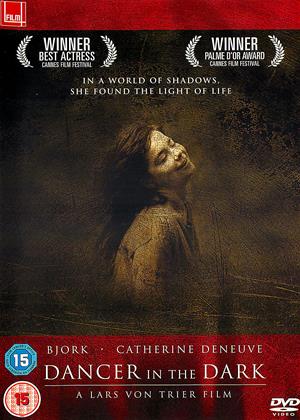 Reviews (3) of Dancer in the Dark

The hopes and dreams of the lead character gives one a feeling of tenderness and strength. She is fighting for her son, who has an illness which CAN be helped by the medics, but at a price.

She works so hard and saves every penny in order to accumulate the medical fees and her only respite is the amateur production of the Sound of Music.

Having never seen Bjork prior to this I was so amazed at her compelling command on screen. She is definitely a "one off" and gives a memorable performance.

The cheerful and happy atmosphere starts to slip away as things begin to go wrong for her. She is far too trusting and, to be brutally frank, just plain stupid in saving up her money in the way she does. Disaster is looming!

I found the last quarter of the film so harrowing as to be almost unbelievable - but no doubt this is the way certain states in the USA deal with those who are find themselves in the terrible situation shown in this film.

Harrowing? Yes, but even more than that: shocking in the extreme. One simply wonders how the sequence of events depicted here could ever be contemplated, let alone carried out.

Please be aware that this film is NOT suitable for younger children to see; I found it hard to watch as the end approached and I'm a fully mature adult male.

So Realistic - Dancer in the Dark review by PT

Apart from the musical sequences, an integral part of Selma's mind set, the hand held camera work and superb acting give this film a realism like that of a documentary.

Bjork plays Selma, a factory worker who is going blind and unfortunately her son has the same genetic disorder. Selma breaks her back saving for an operation for him, to save his sight. She loves musicals and these provide her escape from the sweat , toil , and impoverished existence. Bjork is outstanding as the loveable Selma, so sweet, innocent and committed to her goal.

Catherine Deneuve plays her best friend, an older , almost mother type figure, who watches over her with love. Deneuve is phenomenal, in a rare supporting role ( apparently she wrote to the director Lars Von Tier asking for a small part in one of his movies, as she is obviously a fan. Von Tier replied no, but you can have a relatively big part).

A disaster then hits Selma's plans. What follows is some of the most moving and gut wrenching acting that lead Selma to her picked conclusion.

Excruciating - Dancer in the Dark review by RC

I’m a fan of many of Von Trier’s films and also of Bjork’s music so was intrigued to finally watch this. I was disappointed to find this rather self-indulgently and masochistically pointless. Selma’s plight is drawn out and agonised over while making for an extremely frustrating protagonist who never speaks up for herself but instead wallows in her decline and allows events to take over at every turn. A sort of doomed quasi-saintly figure with an escapist reflex. The musical interludes provide welcome respite by contrast, with playful choreography and nice use of musique concrète details.