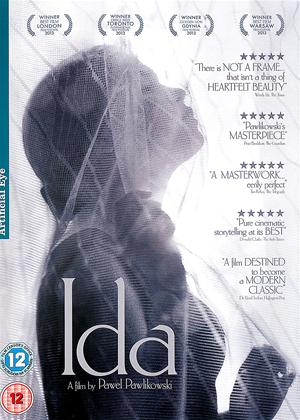 This was a subtle, understated film that lived up to expectations. I loved what wasn't said. The characters were expressive and their motivations and relationships well drawn.

I thought this was a remarkable and thought-provoking film. Featuring a young about-to-be nun and her damaged aunt, it combines reflections on the Holocaust with a very unusual road trip as both go looking for relatives massacred in the Holocaust. It is extremely difficult to find a new angle on the Holocaust and in my opinion this film does it brilliantly. Extremely well acted, shot in black and white that perfectly sums up 1950s Poland, I found this film wonderful and very moving.

Had all the potential, but... - Ida review by dw

I was disappointed with this best foreign film. It is a good story. I liked the idea of a black and white movie but sadly that turned into grey for me. The austere convent and bleak Polish landscapes reminded me of. ' A day in the life of Ivan Denisovitch' a 1970 film, but I was not as moved as the storyline foretold. A little too slow and not enough light and shade and I found myself watching the clock.

Shot in black and white or rather grey and grey. It is not just the choice of filmic colour that transmits the cold, the whole tenor of the film exudes the bleak Polish winter. A strange choice of framing from Pawlikowski in which, many times, faces are seen right at the bottom edge of a shot. Strange but it does allow the eye to wander and take in the whole setting, rather like walking down the street and looking at the tops of buildings.

This original film requires effort on the part of the viewer to make connections, imagine what the lead character is going through at times and generally keep up with the plot. It is well worth the effort. Beautiful, intelligent memorable non Hollywood film

The best film this year by miles. The director searched over 400 actresses aparantly before casting Miss Trzebuchowska whom a friend spotted in a Warsaw cafe. She's no actress it seems, neither does she wish to be - though no doubt she'll now be made amazing offers after her beautifully understated portrayal of the main character, Miss Kulezka was also magnificent in her interpretation of the aunt. The black & white, the 4 x 3 format and Pawel Pawlikowski's determination of using a locked off camera for every single shot, was all a joy to creating a truly great film.

Very sad and poignant story and beautifully filmed. The cast are brilliant and I can see why it won an Oscar!

What a superb film. Yet the brilliant young girl who played Ida appears to have done nothing else as regards acting. Kept us gripped to the end.

I believe they call this kind of film ‘world building.’ It’s an apt description of the results of a talented production team using budget and effects to sustain a convincing environment in which you can immerse yourself. In my view, such is the potency of projects like this, actors are there primarily to compliment this imagined civilisation. In 1982, the original ‘Blade Runner’ achieved this perverse enigma very convincingly. Here all these years later, is the sequel.

There was some mild controversy concerning original composer Vangelis not being assigned to provide a soundtrack for this, but Benjamin Wallfisch and Hans Zimmer’s score is impossible to fault. Vast, weird, laced with industrial swirls and chunky klaxons. Denis Villeneuve’s direction is vast and eccentric, exactly as it should be, and the myriad of art directors ensure that the society, the interiors, the streets, even the habitat of Rick Deckard (Harrison Ford of course: grizzled, isolated, but still very much the same character we knew 35 years ago) is as impressive and spacious as it could be, an arena so absorptive and convincing, you can completely drink it in. My problem is, at 2 hrs 44 minutes, I really felt the need for a change of flavour after a while.

It’s impossible to be impressed at wonderful representations of an intricately carved tale for that length of time with no change of tone throughout, no levity, no particular sense of strident drama and only an irregular threat (Sylvia Hoek’s splendid Luv). We have K (Ryan Gosling) and his girlfriend Joi (Ana de Armas, who, as a perfectly pouting, characterless hologram, is very good) and the very slow story of Deckard’s ‘improbable’ child Rachael, and the long trek to locate her. It is good, but thinly stretched over such huge running time. Wrapping it in the beauty of almost overwhelming effects and atmosphere is an impressive compensation, however.

I loved this movie about a novice nun discovering from her only living relative that she is Jewish and her parents and brother were murdered in World War 2 by local poles who then took over their home and farm. Agata Trzebuchowska was hypnotic on camera and i found the plot quite believable having listened to many polish people over the years. Much of the film is silent so when music appears it has a magical effect. Brilliant photography. Altogether beautiful and profound.

Arty in a good way - Ida review by DJ

I really 'enjoyed' this film. Very strong visually and the music from the jazz band very atmospheric too (a precursor to the music in Pawlikowski's next film - Cold War). Not packed with action or drama but a vey intense portrayal of Poland at this time and the characters experiences. I say 'enjoy' because it is a melancholy story.

The kind of film that divides opinion. If you don't like slow moving artistic films then avoid this one!

Ida follows 18-year-old Anna, an orphan raised in a convent with quiet dignity and frustration. Living in the snowy setting of 1960’s Poland, she readies herself for her final vows to become a nun. But before taking the final plunge, Mother Superior decrees that she should visit her remaining relatives. It just so happens that her only kin is aunt Wanda, a cynical drunk and louse of a woman. She is so miserable and spiteful of the prim and proper Anna that she can’t wait to reveal that Anna’s real name is Ida and that she had Jewish parents. Realizing her parents were murdered during Nazi occupation with no account for their bodies, the two of them set off on a road trip for some somber closure.

The two mismatched family members travel to several gut-wrenching locations of their past to find the clues of their relatives’ whereabouts. They venture back to the old family house where many lost memories are attempted to be unearthed. While they follow up on a lead about the aged and dying killer of Ida’s parents, Ida and Wanda stay in a hotel with musical entertainment downstairs. While Ida befriends one of the musicians, Wanda continues to mock the poor girl for her religious ethics and morals. In between her drunken rants, there is some truth to her words about Anna gaining more life experience. The world may seem cruel from Wanda’s perspective, but it doesn’t mean that Ida needs to swear her loyalty so early in her life which may just be beginning.

As Wanda sinks deeper into her alcoholic and whoring abyss, Ida slowly starts to come out of her shell from within the church. Their worlds of emotional strength are put to the test as they zero in on the burial site of their Jewish relatives. This is not a film where two women bond over their adventure, but meet at the halfway point in their lives as one goes up and the other down. They have a very brief moment of connection before the depressing facts reveal themselves and change their lives forever. It doesn’t help that they also have to deal with these issues in the face of a new wave of socialism.

While Ida is an interesting enough story to follow, it’s a technical marvel of film that elevates its subject matter far higher. The whole movie was shot in the 4:3 aspect ratio and in black and white. Every shot features the characters occupying the bottom of the screen with the environment overpowering them at every turn. All of these elements give the film a very claustrophobic feel where there is little control over the current state of 1960’s Poland.

Several of the locations feel like they take place in giant structures too big for this world. Ida walks out of the office of Mother Superior with an exit that looks more like a steep entrance to a mansion. She climbs a flight of stairs that appear as though they could go up for miles. The shots in the hotel almost feel as though everyone is sinking and shrinking from such spacious living quarters. I’m not sure how much of these sets were just built that way or if there was some fancy camera work involved. Part of me doesn’t want to know and let the film remain a mysterious beauty of the medium.

The film was directed by Pawel Pawlikowski and it is the first time he’s shot a film in his native country of Poland. He left the communist country in 1971 when he was 14 and proceeded to make movies in the UK. I’m unsure how much of his personal perspective on the political and historical climate of Poland from his youth was translated into the film’s themes. One thing is for sure: Pawlikowski delivers a very personal film that perfectly conveys the cold isolation of both the bitter winter weather and the crushing psychological toll of past atrocities. Ida is a beautifully sad and dark journey of a woman finally beginning her life of freedom and a woman ending her life of sin. It can best be summed up in a peculiar moment of Ida witnessing a stained glass window in a barn; beautiful artistry amid cow manure. Ida is a haunting experience that sticks with you long after the final frame and makes me that much more drawn to a second viewing just to take it all in once more.