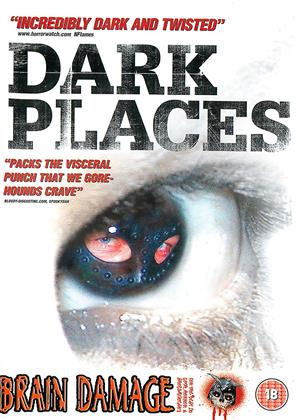 Synopsis:
Prostitution, drug abuse, rape, murder, cannibalism, bondage and sadomasochism. Got your attention yet? Good! "Dark Places" is an incredibly dark and twisted, psychological thriller that focuses on a crack whore named Keri and her nightmarish journey to get her fix and to find refuge from the street, but instead lands right in the middle of hell. Make no mistake, Keri is a crack whore by every stretch of the word, and 'Dark Places' begins with Keri turning tricks to get her fix.
But this trick goes horribly wrong and now Keri's got to get off the street, but where's a lowly crack whore supposed to find shelter from the storm? Oh yeah, a flophouse, that's a great idea! One thing though is tenants of this flophouse get to stay in exchange for some very bizarre shit.
Actors:
Nessa Hawkins, David C. Hayes, Syn DeVil, Ernest Melon, Raj Suri, Dale Denton, Eleni C. Krimitsos, Jose Rosete, Dan Bentel, Amy Searcy, Nina Tepes, Myla Leigh, Neeven Albediwa, Chelsea Westhoff, Janese McGrath, Amber Gray
Directors:
Guy Crawford
Producers:
Guy Crawford, David C. Hayes
Writers:
Guy Crawford, David C. Hayes
Studio:
Film 2000
Genres:
Horror, Thrillers

Nessa Hawkins plays Keri Walker, a crack addled prostitute who vaguely remembers killing her latest pick-up as he attempts to rape her. Sounds grim? It gets grimmer. For some reason we don’t ever really find out, Walker is despised by all, even those who supply her drugs. So she enters into a sleazy ‘safe house’ where she is subjected to further horror and all kinds of degradation.

This is a micro-budget production, but every kind of distortion, jump cut and hallucinogenic imagery is used to take your mind off that. For example, the dialogue seems clumsily inserted at times, with a background static hiss, all of which cuts out when the line is spoken. Typical limitations of a low-budget film, or deliberate policy to further play with our senses? You decide! As a short film, it would work as a truly trippy, dark nightmare, but, even though the running time is only 1 hour and 17 minutes, the barrage of shouting and distortion eventually becomes confusing and the shocks lose their value.

Hawkins is excellent as the unfortunate, addicted Walker, her central performance giving us a welcome constant throughout the madness. The storyline, such as it is, exists at the beginning and isn’t further explored until the end, where events aren’t quite as she remembers. My theory, and this is a sizeable SPOILER, is that the ‘safe house’ is a doorway to hell, or death. As Walker finally fights back and rejects it, she regains and retains her life.

I want to like ‘Dark Places’ more than I do, because it uses its lack of budget to great effect and produces a cocktail of powerful twisted imagery. But there’s too much style over substance. David C Hayes, who stars as Luther, an excessive owner of the ‘safe house’ and one of the more extreme characters we meet here, also co-writes. Interesting.