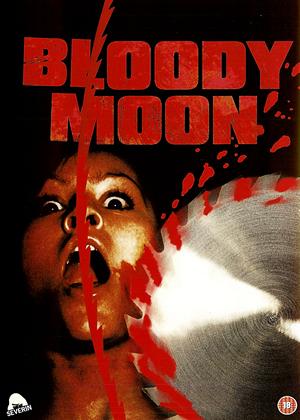 Miguel (Alexander Waechter), a man afflicted with a particularly unrealistic facial scar, is sent to an asylum for rape and murder. With little evidence that he is cured, he is released five years later and immediately resumes his hobby of peering and leering at highly made-up women bedecked – barely – in stunning early 1980’s attire. One reason for his behaviour appears to be his forbidden love for his sister Manuela (Nadja Gerganoff), who is happy to parade herself around him in suggested poses and revealing clothes but is appalled at continuing their forbidden relationship.

Euro sleaze, eurotrash, eurotica or euro-horror: there are plenty of labels for allegedly exploitation films such as ‘Bloody Moon’, but a lot of them are unfairly maligned by the lazy definition. A lot of films directed by Spanish Director Jess Franco are far better than their reputations suggest. This, however, fits squarely within that category (Franco himself has labelled it s**t). It is Franco’s contribution to the slasher genre.

Yet it is worth continuing. The murders increase in frequency and bizarre gratuity (beheadings, stabbings and a knife protruding somewhat improbably from a nipple). The character of Angela (Olivia Pascal) staggers from witnessing one obscene set-piece after another and understandably is the scream-queen of this particular project. The scenes she witnesses actually gather together the somewhat isolated moments from earlier on and give them a coherency I wasn’t expecting.

In the end, against my earlier misgivings, ‘Bloody Moon’ ends up with a satisfying bloodbath filled with imaginative moments and a fairly convincing twist. Not Franco’s best film, then, but somewhere in the middle.