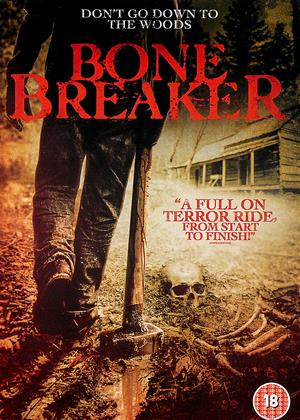 Synopsis:
There's only one goal and that's to survive. Welcome to the land of the Bone Breaker. A secluded location in the countryside promises to be the perfect spot for a fitness video shoot, courtesy of a local landowner. Running late for filming, one member of the team trips while rushing through the woods, breaking her leg. She cries out for help, but nobody seems to hear her screams. Among the trees, a figure emerges, dragging a huge hammer. The team soon learn that they are being subjected to a sick game, having been lured in under false pretenses. Facing their doom at the hands of a sinister maniac, can anyone survive the Bone Breaker?
Actors:
Lucy Aarden, Rachel Bright, Jack Parr, James G. Nunn, Ryan Winsley, Jade Gatrell, Ade Dimberline, Sophie Jones, Ian P Campbell, Mike Maley
Directors:
Nicholas Winter
Producers:
Nicholas Winter
Writers:
Nicholas Winter
Studio:
Reel2Reel
Genres:
British Films, Drama, Horror, Thrillers
Countries:
UK

To begin with, ‘Bone Breaker’ introduces us to a bunch of casually attractive go-getters whose dialogue consists mainly of motivational speeches and modern day cliches, either to themselves or their fellows: ‘Not gonna lie’, ‘that’s the badger’, ‘we only want people that look the part’, ‘I need to be taken seriously’, ‘I’m not just a pretty face’… and so on. It’s established that in this clique, only pretties are allowed, only toned, fitness obsessed skinnies are wanted. On their vibrant platform of the internet, it’s all about self-promotion and followers. If you like spending your time with people that talk like this, you’ll enjoy the characters. Or not, of course – the bitchy exchanges between them encourage us not to take them too seriously. But really, their ‘hashtag’ quotes and exchanges and ideas about their own self-worth are *loathsome*. The gym-bods on very self-satisfied display are surely to be despatched by the mad hammer-dragger at loose in the woods as displayed on the DVD cover. That’s the hope.

The pacing of ‘Bone Breaker’ is odd. The girls are attacked by someone who receives no-build up, and then left. The audience is then treated to drawn out scenes of them in varying degrees of pain, out in the biting wilderness (and it really does look freezingly cold). Their plight is communicated very well (especially Rachel, played by Sophie Jones), but there’s no subsequent progression for ages, before the villain returns to administer a little more bloodless violence.

Exasperatingly, the girls actually see the killer as a fitness rival. “I’m better than you, faster than you,” Ruby (Lucy Arden) taunts the weapon carrying psychopathic antagonist. Not only is this unwise, it demonstrates the swathe of the arrogance and shallowness displayed by the people we are supposedly meant to route for. There’s no need to make our heroines this dreadful.

I noticed a location toward the end that seemed familiar - turns out ‘Boner Breaker’ is produced by many of the same team responsible for ‘Dark Path (2020),’ including writer/director Nicholas Winter. There are further similarities: a cast of mainly strong-minded females, with a handful of ineffectual males; pursuit through woodlands, and the finale, both of which end in a similar manner. My score is 5 out of 10.

Not worth it - Bone Breaker review by AN

I suppose it's at least better than the low budget, badly acted, weak British horror film that I haven't made. Currently arguing with my partner over who added this pointlessness to the list... You're better off spending 74 minutes staring at a carrot.