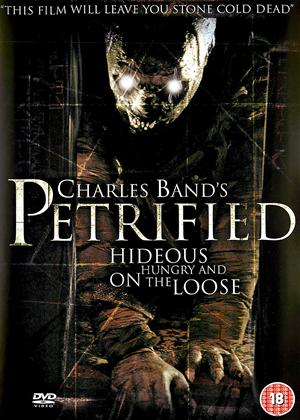 Synopsis:
When a black market antiques deal is botched by a goon and his girlfriend, the mummified remains of an alien they were selling is revived by the blood of the murdered dealer, Eldridge. The blood hungry mummy is on the run, and stumbles upon an in-patient psychiatric facility that is home to dozens of beautiful, voluptuous nymphomaniacs. Meanwhile, the mummy is being tracked by FBI Special Ops agent, Buzz York. While the mummy wreaks havoc at the facility, the resident Dr. Von Gelder does everything in his power to protect his greatest experiment - eternal youth, in the form of the beautiful Cory.
Buzz York teams up with Helen Noel and the other patients to battle the blood and lust hungry mummy.
Actors:
Darrow Igus, Roark Critchlow, Osman Soykut, Dana Marie Barba, Jessica Lancaster, Kimberly Pfeffer, Tim Murphy, Katie Adams, Stephanie Centry, Robert Buckley, Elina Madison, Nick Stellate, Shirley Brener
Directors:
Charles Band
Studio:
Film 2000
Genres:
Horror, Sci-Fi & Fantasy

I’m not sure I see what inspires people to make films like this. Parodies are fine, but when the parody itself is made with much less money and sophistication than the genre it is parodying, it’s difficult to see the point.

I am assuming ‘Petrified’ is one such film. It doesn’t invite itself to be taken seriously, yet there is nothing here particularly amusing. The most successful aspect of it is the main creature (a vampire mummy who turns many of its victims to stone). For a low budget venture, I’ve seen far less convincing monsters. And yet any scene with the creature is played and shot so badly that even the most invested viewer must find it hard to take things seriously.

To allow for some mild titillation, events occur in a hospital designed to cure nymphomania. We see lesbians attempting to have sex. I mention this because it leads to a joke in the script which demonstrates the level of finesse on display.

Experiments are being carried out of some patients allowing them to appear younger than their real age.

“Ew,” pouts her lover. “You mean I’ve been muff-diving an old hag?”

Another gem is this:

“This is not of terrestrial origin.” “What, you mean like E.T.?”

I might not ‘get’ this film, and that’s fair enough. If there are those that find this entertaining, then I’m glad: presumably those who wrote and produced it had a hoot. But it really isn’t for me.