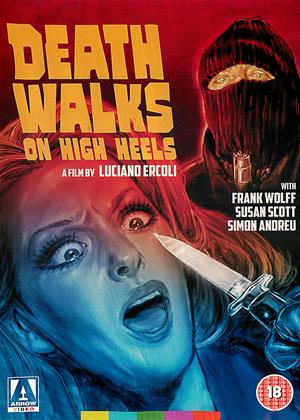 Sign up
The Cynic, the Rat and the Fist

Somewhat flighty exotic dancer Nicole (Nieves Navarro) finds herself pursued by a masked killer with unnaturally bright blue eyes. Much of this film’s running time is devoted to a partially clad Nicole taking her work home with her, first with hot-headed boyfriend Michel Aumont (Simon Andreu), and then with saucy, middle-aged Dr. Robert Matthews (Frank Wolff), into whose arms she runs when she suspects Michel might be her black-clad pursuer. This latest, more mature admirer looks after her far better than Michel did.

This giallo has much in common with other films of the genre – a sumptuous musical score (by Stelvio Cipriani), a lovely lady in jeopardy, and (far too) much softcore titillation which, to be honest, bungs up the plot and stifles much in the way of tension – at least in the first half. There are suspects galore – one handed Hallory (Luciano Rossi), the good doctor himself (who seems too good to be true) and silly old spurned Michel (who, if innocent, is right to feel unjustly jilted, despite his volatility). And shocks, too – main characters die when you least expect it. This causes a readjustment on behalf of the audience; when someone we have invested in from the beginning of the film, we are left with more peripheral characters who then take centre stage, and we have to reboot our interest in them. It’s good to have these shocks and surprises, but it takes a special skill for the story to continue with the same amount of interest. After some shaky moments, ‘Death Walks on High Heels’ just about manages it.

The locations, mostly set in the coast of England, are lovely. Such scenic backgrounds provide a heavy slate-grey canvas for the increasingly colourful goings-on. Things become so entangled as to threaten to topple into confusion, but a terrific twist and action-infused finale livens things up toward the end. Featuring some meticulously choreographed fight scenes and convincing gore, ‘Death Walks on High Heels’ is an enjoyable entry into the world of giallo.