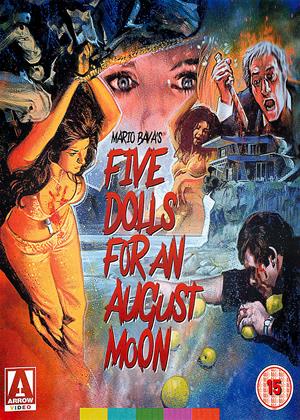 Rent other films like Five Dolls for an August Moon

Reviews (1) of Five Dolls for an August Moon

Possibly a little groovier than many giallo films from this period, thanks to Maria Bava’s direction fused with an exotic score by Piero Umiliani, ‘Five Dolls’ opens with a swinging, debauched party culminating with a delightfully dishevelled Edwige Fenech (as Marie Chaney) faking her own bloody death. Those crazy kids.

We are introduced to a plethora of characters involved in a confusing myriad of affairs and casual romances, all acting like moustache-twirling villains. Taking time out from their lives to relax on a sumptuous, sun-kissed island, their vacation is marred only by the presence of a murderer in their midst. As they try unsuccessfully to find out about the mysterious Professor Farrell and his secrets in a series of playful, titillating asides and clandestine meetings, things become pretty complicated fairly quickly. Murders, missing money and ‘formulas’ … it all gets a bit much. In fact, it’s tempting not to worry about all that and concentrate instead in the visuals which are often breath-taking. There are various scenes held on the beach at night; I’m tempted to think a blue filter was applied to the camera during a sunny day to achieve the effect, but whatever, the results are visual indulgence – stunning. Umiliani’s bossa-nova score, with thick and chunky organ rhythms enhancing scenes in which characters search amidst lowing palm trees on the isolated beach for the latest corpse – rarely has the macabre looked and sounded so incredible.

Whilst I think it is fair to say the result is definitely a case of style over substance (lots of people you don’t really like coming to blows in very sixties’ locations reminiscent of the model sets used in Gerry Anderson’s puppet series), there is much to enjoy. The images of the growing number of corpses being bagged up and hung in the cooling room amongst the animal cadaver food supply is delightfully sinister.