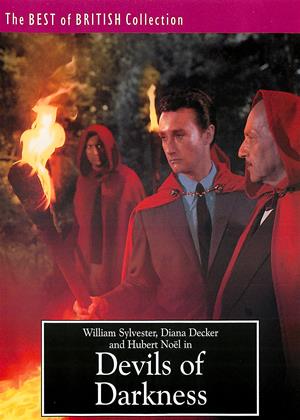 Sign up
Doctor Who: The Power of the Daleks

Reviews (2) of Devils of Darkness

Yes, it's another of those movies this site labels "classics" because they haven't the slightest idea what the word means, but people sometimes use it when talking about movies so with a bit of luck it applies to this one. Alas, as usual, it doesn't, unless you believe "classic" to mean "half-assed third-rate garbage". Then again, this DVD is part of what somebody has decided is "The Best of British Collection", so perhaps there are at least two people out there who honestly think it's a classic. If so, neither of them is me.

Though I have to admit that, in a strange way, I enjoyed it. Making movies is very difficult and expensive, and not all studios have enough money or talent to adequately realise their visions. Planet Film Productions are so obscure I had to look them up, and I was surprised to find that I was familiar with two of their films, "Island of Terror" and "Night of the Big Heat", both made after this one, and for both of which they borrowed so many people from Hammer that I'd always assumed they were slightly-below-par Hammer, whereas in fact they were Planet doing their very best and nearly getting it right, thanks to a lot of help from a cast and crew who knew what they were doing.

Which those responsible for this laughable excuse for a horror movie clearly didn't. None of the cast can act well, and most of them are appalling, in the finest "Of course I'm French! Why do you think I have this outrrrraaaaageous accent?" Monty Python tradition. Many of the characters are indeed supposed to be French, in the same way that many of the scenes are supposed to take place at night, but the day-for-night photography is so bad the characters have to keep telling each other it's dark in case the audience haven't noticed. When I used the word "laughable", I meant it literally. If almost any scene in this film was randomly inserted into a comedy sketch show, it would be quite a while before the viewers realised it wasn't meant to be funny.

So if you watch it in the right frame of mind, you'll be genuinely entertained, though for reasons unintended by its makers. And I'm sure the humour really is unintentional; these second, third and tenth-rate actors are obviously giving it all they've got, which only makes it funnier. But if it's horror you're after, I'm afraid you'll be disappointed. Given the almost complete lack of gore and the total absence of sex or nudity, I assume the censor imposed a 15 certificate due to a brief shot of somebody smoking a joint, without which it's barely even a 12A. The pot-smoking scene is part of a hilarious subplot involving Satanist hippies, but since it's only 1965 and most people aren't quite sure what hippies are yet, this lot are mostly middle-aged middle-class beatnik antique dealers who secretly belong to a cult that worships a French vampire. As you do. I think some of them may also be lesbians. Oh my, the things those beatniks got up to!

All in all, it's a terrible film which nevertheless sort of works as an accidental parody of itself, and it deserves some kind of recognition for achieving even that much, given the number of allegedly "so bad they're good" movies with no real entertainment value whatsoever. Though if you want proper sixties horror, you'd do better to rent almost anything starring actors like Peter Cushing, Christopher Lee or Vincent Price whom you've actually heard of.

This anaemic and little known horror film from the 1960s has some good moments and performances from its little-known cast – but its lack of gore or horror atmosphere makes the 84 minutes something of a slog.

This is made by the company Planet Film Productions, who are perhaps best known for their Terence Fisher-directed ‘Island of Terror’, which involved Peter Cushing fighting jelly monsters called Silicates. Perhaps the word ‘genteel’ describes the company’s output, or less kindly, ‘dull’.

I admire anyone for wanting to create something horror-based; it is my favourite genre by far. With all due respect to everyone involved here, it seems they have little idea how to tap into to any kind of unsettling atmosphere, any way in which to raise a few scares or much in the way of tension.

While the ceremonies and debonair French vampires have an unusual and enjoyable quality, you have to sit through talky scenes of no consequence to get to them. Day for night filming takes place, but is so ineffectual, the night-creatures appear to be walking around in sunshine. Director Lance Comfort, for whom this was his last film, makes fine use of colour, giving this low budget venture a bright veneer, with some lush red used for the cultists’ ceremonies.

Hammer films had become a force to be reckoned with long before this was released, and watching ‘Devils of Darkness’ makes it easy to see why: Hammer had a company style, which ran right up to their final releases, that has proven difficult to emulate. Subsequent Planet Films would hire Hammer alumni and still struggle to generate the elder company’s technique.

A mainly bloodless piece with a spiralling storyline, ‘Devils of Darkness’ isn’t a bad film, but it isn’t a terribly good one either. My score is 6 out of 10.