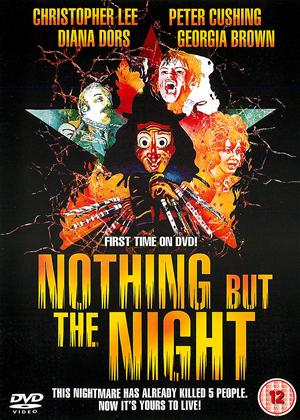 Synopsis:
Colonel Bingham (Christopher Lee) is investigating the mysterious death of an old friend and two other Trustees of a Foundation which runs an orphanage in Scotland. Bingham enlists the help of pathologist Sir Mark Ashley (Peter Cushing) after disaster strikes when a bus carrying the orphaned children crashes killing the driver.
A pupil, Mary (Gwyneth Strong), is hospitalised following the crash and with the help of Dr Haynes (Keith Barron) and hypnosis, discovers that the girl is suppressing memories of a traumatizing fire. Meanwhile a convicted murderer and prostitute, Anna Harb (Diana Dors) claims to be Mary's natural mother and seeks custody of the child.
Mary is returned to the orphanage in Scotland but her behaviour is becoming more eccentric as Harb tries to recover he lost child. Mean-while, Bingham tries in vain to discover who is now responsible for the welfare of the children and controlling the orphanage. However he uncovers a dark and deadly plot by a satanic cult that leads to a tense and disturbing climax.
Actors:
Christopher Lee, Peter Cushing, Diana Dors, Georgia Brown, Keith Barron, Gwyneth Strong, Fulton MacKay, John Robinson, Morris Perry, Michael Gambon, Duncan Lamont, Shelagh Fraser, Kathleen Byron, Geoffrey Frederick, Louise Nelson
Directors:
Peter Sasdy
Producers:
Anthony Nelson-Keys, Christopher Lee
Writers:
John Blackburn, Brian Hayles
Studio:
Spirit Entertainment Ltd
Genres:
British Films, Drama, Horror
Countries:
UK

Sign up
Sherlock Holmes: The Hound of The Baskervilles

Reviews (1) of Nothing But the Night

Disgusted by the excessive violence of the Hammer films he'd appeared in so many of, Christopher Lee formed his own production company, Charlemagne (named after the Holy Roman Emperor he was very fond of telling people he was allegedly descended from), to make the kind of movies he'd be proud to star in. For this, the first Charlemagne production, Lee not only contributed his own talents but brought on board his good friend Peter Cushing, a real pro who almost never gave a bad performance, and borrowed a Hammer director he'd worked with before and trusted to do a good job. What could possibly go wrong?

Almost everything! It's not impossible to make a creepily atmospheric horror film that isn't drenched in gore, and there are many fine examples. Sadly this movie is pretty much a masterclass in how not to do it. With only a few minutes of the film left to go, Peter Cushing suddenly figures out the entire plot and gives the lucky viewers a quick verbal rundown of the truly horrific (and wildly implausible) events that have been happening all along, unknown to and unseen by anyone, including the audience. Only then do we realise that this murder mystery has remained mysterious by the cunning trick of not giving us the slightest hint of what it's actually about, which is a pity, because a gradual revelation of the ghastly truth would have been both far more interesting and a lot more horrifying than the dead ends and red herrings we've been trying unsuccessfully to make sense of for the last hour and a quarter.

Oddly enough, it has far too many similarities with "The Wicker Man", which came out later the same year, to be coincidental. Yet it's so ineptly written that it seems less like a rip-off of that film than the work of somebody whose only knowledge of its plot came from overhearing someone telling their friend about it on a crowded bus. Intelligent people believe absurdities simply because the plot requires them to. Characters have long boring discussions about things which turn out to be irrelevant because the scriptwriter's brilliant decision not to tell us what's really going on until the movie's nearly over means it needs one hell of a lot of padding. For the same reason, hundreds of people accompanied by police dogs and a helicopter search a bleak stretch of moorland for a ridiculous amount of time without finding the slightest trace of Diana Dors, who is wandering around in plain sight in a shiny crimson raincoat.

As for the out-of-absolutely-nowhere shocking revelation which explains the tedious muddle we've just sat through, it's so ridiculous it feels as though a writer who was making it up as he went along found himself with no remotely good ideas and a deadline looming. By the way, if you're assuming from the the DVD cover illustration that this movie features a weirdly masked killer, you'll be very disappointed. That image does appear very briefly in the film, but it's not what that picture implies.

This was the first film made by Charlemagne Productions. It was also the last. It isn't hard to guess why.