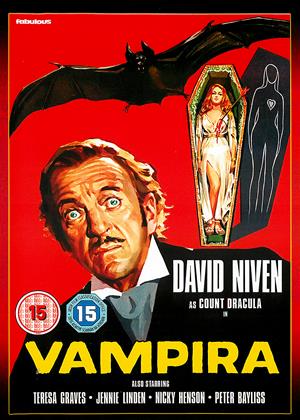 The fact that a sexy horror comedy starring David Niven as Dracula actually exists sounds too good to be true, doesn't it? Unfortunately it is. Yes, the film does exist, but it might as well not have bothered to, because it's abysmal on every possible level. It's a horror film containing hardly any horror. It's a bawdy sex romp with practically no sex. And worst of all, it's a comedy with absolutely no laughs.

I tell a lie. Worst of all, it's a movie which tries to jump on the blaxploitation bandwagon by including a major black character, and then misses the point by several light-years by making it central to the plot that the white characters regard being black as a disease. I know political correctness hadn't been invented in 1974, but that's unbelievably crass even for the early seventies!

The plot: Count Dracula's wife Vampira (not the one in "Plan 9 From Outer Space") is even deader than she's supposed to be and needs a transfusion, but unfortunately she has such a rare blood-group that the count has been looking for a donor for 50 years. He finds one when some Playboy models get involved just so there can be sexy brainless women around for the men to treat like objects. This accidentally causes Vampira to turn black. She loves her new look, but Dracula wishes to restore her lily whiteness by re-transfusing her with pure untainted non-darkie blood, in order to do which he needs to to track down the girl with the rare blood-group all over again, only by now she's hundreds of miles away in London. Much hilarity is supposed to ensue. It doesn't.

Nicky Henson from "Confessions of a Window Cleaner" and other soft-core seventies crap is his usual sleazy self as a "hero" who gets more screen-time than David Niven. Bernard Bresslaw from the Carry On franchise, Carol Cleveland of Monty Python fame, and other B and C-list seventies comedy icons try to be funny but the script won't let them. Linda Hayden, reprising her performance in "Taste the Blood of Dracula", is a very sexy out-of-control newbie vampire and by far the best thing in the film, but she's not in it for long. And David Niven is as professional as you'd expect him to be, but a lot of the time he looks very weary indeed. I don't blame him.

I was going to say this is as funny as you'd expect a vampire film written by the creator of "Are You Being Served?" to be, but in truth it's not even as funny as that. It's the kind of movie which makes you seriously wonder how it ever got made, because at no stage in its production can in conceivably have seemed like a good idea. Maybe it was a tax write-off, or the studio head was trying to win a bet that he could cast David Niven as someone even less appropriate than James Bond, or something. Anything but a genuine attempt to make a good movie, because it simply can't have been. "Love at First Bite" (1979) treats very similar material far more successfully, mainly because the script-writer remembered that comedies are suppose to include jokes.