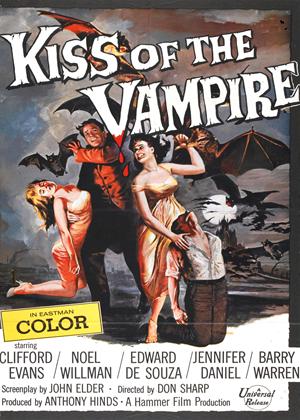 Reviews (1) of Kiss of the Vampire

This lesser-known Hammer horror is probably one of their most obscure films because it lacks all the ingredients you'd expect to find in any of their more commercially successful vampire movies (and some of their duds too): Christopher Lee and/or Peter Cushing, ideally both; or failing that, topless women who bite people and are probably lesbians. None of Hammer's A-list regulars are in the cast of this one, and even their second-stringers are in short supply. It's almost as if Hammer didn't have much faith in their own film.

Actually they probably didn't. Christopher Lee, in a doomed attempt to avoid becoming hopelessly typecast, refused to make a sequel to 1958's hugely successful "The Horror of Dracula" until 1966, so their 1960 follow-up "The Brides of Dracula" didn't actually have Dracula in it, and wasn't a hit. What's more, in response to accusations that they'd let Hammer get away with far too much gore in their Dracula and Frankenstein films, the censors had come down so hard on 1961's "The Curse of the Werewolf" that the version released at the time barely had a werewolf in it and made very little sense (happily nowadays it's available uncut). So in 1962 Hammer were basically trying to make the gory Dracula sequel the public wanted with very little gore and no Dracula, and they knew they'd be lucky to recoup the budget.

That's the practical reason why this movie is so unlike every other vampire film Hammer made. But, perhaps by accident, its sheer oddness makes it peculiarly effective. Prefiguring Roger Corman's "The Masque of the Red Death" and Roman Polanski's "The Dance of the Vampires", which isn't far off being a comedy remake, and even, to a surprising extent, "The Wicker Man", the concept of vampires being far more numerous and better integrated with human society than the Dracula franchise would have us believe is well ahead of its time, and the masked ball where every male guest is dressed as Satan is magnificently strange, all the more so because the almost permanently bewildered hero fails to notice anything suspicious about this. Due to the enforced lack of gory neck-biting, these vampires are forced to rely on over-elaborate mind-games, with the result that the film is plotted like a nightmare in which the dreamer is swept helplessly along by bizarre events which when he thinks about them afterwards make no sense at all, even if they seemed to at the time.

Why didn't the vampires simply kill the poor guy when they easily could have? Because if they had it would have been a very short film. Do the locals know what the mysterious Ravna family are really up to? It looks as if the director wasn't sure, and changed his mind halfway through. How are two men going to defeat several dozen undead devil-cultists? The way they manage it truly has to be seen to be believed! There's even a strong hint that this would have been a lesbian vampire movie if Hammer had managed to pluck up the nerve to make one eight years before they actually did. And the very first scene is possibly the best prologue any Hammer film ever had; if the rest of it was that powerful it would be an undoubted masterpiece.

Which it certainly isn't. The script makes so little sense that I suspect they had to rewrite it as they went along to replace gory scenes the studio reckoned would be mercilessly excised by the censor with whatever else anyone happened to think of, the hero is a useless twit, his girl is a nonentity, and I don't think the innkeeper is entirely sure which movie he's in. But it's so unashamedly bizarre that I love it. This isn't by conventional standards a four-star film, but I'm giving it a bonus for featuring by far the most over-ambitious deployment of rubber bats on strings in cinema history. Because what's not to love about that?