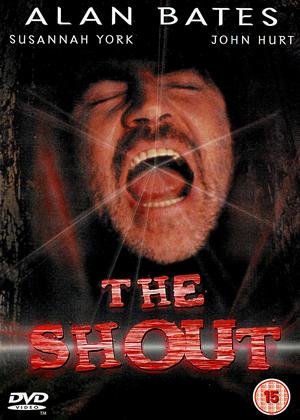 Synopsis:
During a cricket match at a lunatic asylum, patient Alan Bates relates a strange story to composer John Hurt and his wife played by Susannah York. It seems that Bates once lived with Australian aborigines, who taught him the secret of a deadly shout which has the power to kill anyone within earshot. He moves in with the couple and starts a steamy affair with York. Meanwhile, Hurt who wants to harness the energy of 'the shout' for his music will not rest until he has discovered the truth about his guest's strange powers.
Actors:
Alan Bates, Susannah York, John Hurt, Robert Stephens, Tim Curry, Julian Hough, Carol Drinkwater, John Rees, Jim Broadbent, Susan Wooldridge, Nick Stringer, Colin Higgins, Peter Benson, Joanna Szczerbic
Directors:
Jerzy Skolimowski
Producers:
Jeremy Thomas
Writers:
Robert Graves, Michael Austin, Jerzy Skolimowski
Studio:
Prism Leisure
Genres:
Drama, Horror
Awards:

Reviews (3) of The Shout

Once again, the synopsis is slightly mangled and very misleading. This extremely strange movie has the twisted logic of a dream. During an increasingly chaotic cricket match at the mental hospital where he is a patient, Alan Bates tells Tim Curry most of the film's story in flashback, warning him at the outset that he's an unreliable narrator who sometimes gets things mixed up, but nevertheless it's all true. And the flashbacks contain a further layer of backstory which is never confirmed, and appears to be not terribly reliable either.

Appearing out of nowhere and inviting himself into the smug little household of fashionable but talentless avant-garde composer John Hurt and his devoted but vaguely dissatisfied wife Susannah York, on whom he casually cheats, Bates dominates them both in different ways with the extraordinary magical powers he allegedly learned while living for 18 years as an Australian aborigine. The Anglican Christianity which is frequently referenced, and the cricket match going on in the background throughout the film, are both impotent attempts by modern Englishmen to impose order on a universe which isn't having any of it, just as Hurt's pretentious musique concrète is a feeble parody of the raw chaos Bates can genuinely unleash to the point where everyone in earshot drops dead. However, it seems that letting aboriginal magic loose in cosy old England gives reality such a jolt that the magic becomes infectious...

Unfortunately, a movie that could have been "Eraserhead" meets "Straw Dogs" (in which Susannah York also appeared, and also had nude scenes, which seems to have been a contractual obligation, judging by the number of films she's in in which she actually keeps her clothes on) is oddly compromised by the story being simultaneously too weird and not quite weird enough. The utterly bizarre events which start to occur as reality unravels, and which aren't really explained at all, are somewhat devalued by an ending that's just a little too neat, and way too reminiscent of "Roald Dahl's Tales of the Unexpected" (remember that?). If it had had the courage of its convictions and taken both the insanity and the ambiguity about what actually happened a bit further, like "Picnic at Hanging Rock", which had the genius not to neatly resolve anything at all, it could have been a classic weird movie. It isn't, but it's still a fascinating curiosity well worth a look because true originality and bold experimentation are always interesting, and in today's sausage-machine movie industry, even more undervalued than they were half a century ago.

By the way, connoisseurs of those "before they were famous" moments may enjoy the sight of a very young and very, very mad Jim Broadbent running around in his underpants.

Its Not (quite) Cricket - The Shout review by RC

I remember seeing this when it first came out (1978) and thinking it a bit overblown. Just watched it again (2020) after it was featured in a list of films containing an English cricket match (a short list; The Go Between from the same period is another one, also with Alan Bates in a similar role)

It now seems a bit better than I remembered despite some inconsistencies and plot holes. Alan Bates, for all his brooding lumbering around, never quite pulls off the surreal menace that the role of Crossley, the man with The Shout That Can Kill, demands.

The cast features many well known English actors of the period, including Susannah York getting her nipples out as usual and a young Jim Broadbent ripping his kit off to prance about in his pants in the thunderstorm that terminates the match, and the film. The Devon locations are an added bonus.

All in all an entertaining 90 minutes although not a great film by any means. (and there isn't that much cricket!). Worth 3/5 or 4/7 if you prefer a finer grained rating system)

Incidentally the synopsis here on Paridiso is incorrect in moment (Dec 2020) - its got the story the wrong way around.

Politeness is one thing ... - The Shout review by NP

The acting on display here is exemplary. When you have people like Jim Broadbent and Tim Curry in supporting roles, you know the main cast are of a high standard.

My only problem is, when Susannah York and John Hurt welcome Alan Bates’ character into their homes, they are too ‘polite’ to notice how utterly bonkers he is. Turning the other cheek is one thing, but there are several instances where Bates would have earned his marching orders, however politely. As it turns out, he appears to be slightly madder than anyone realised.

‘The Shout’ would have made a terrific episode of vintage UK drama ‘Tales of the Unexpected’, where it would result in a pretty tense half hour of television. Stretched to nearly three times that, only the acting saves it from being a bit of a chore. My score is 4 out of 10.