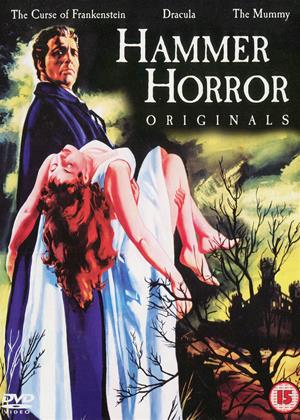 Reviews (1) of The Mummy

As with all Hammer's gore-soaked reboots of Universal's tired old monsters, the first film in their mummy franchise is the best, making the most of its simple plot by piling on the exotic creepiness and not waiting too long before showing us what their new turbocharged mummy can do. Beginning in exactly the same way as the very first mummy movie starring Boris Karloff from 1932, in which the title character is awakened by mistake, is entirely free-willed, and has his own agenda, it then gives logic a body-swerve by devoting the rest of its running-time to rehashing all the sequels, in which the mummy is awakened on purpose by a sinister chap in a fez to avenge the desecration of the tomb of somebody or other, and is little more than a dehydrated zombie. This of course results in a storyline you're probably not supposed to think about too hard, in which the baddie does everything in the wrong order. (By the way, watch out for a bleeding chunk of the plot of "Dracula" which Hammer left out of their movie adaptation but used here instead.)

And yet, despite such basic lapses in narrative coherence, it works, mainly thanks to Christopher Lee's superb performance as Kharis, the 4,000-year-old desiccated revenant who defied even the gods for love and paid a horrendous price. Acting with nothing but his eyes, Lee manages to convey the depths of passion that drive this tormented creature, making Kharis a truly sympathetic mummy. Probably because Lee absolutely hated playing the Frankenstein Monster, feeling that a rôle in which he never spoke and his face was completely hidden wasted his talents and any tall man could have done it, there's an extended flashback showing us how Kharis came to suffer such a terrible fate, but ironically he's as bound by religious laws in life as he would be by bandages in death, and he's still doing all the real acting with his eyes while the rest of him performs elaborate, sometimes cruel, and mostly meaningless rituals.

Apart from some Irishmen we're meant to find amusing and an "English" police detective whose accent isn't even native to this planet, the supporting cast are very good too, especially a young and vigorous Peter Cushing, who is cleverly given a minor disability, so that although he isn't paralysed by fear of the stiff-legged, slightly arthritic mummy, he can't run any faster than it can, so he has to fight. Which he does, as effectively as anyone could against something that doesn't care if you blast holes in it with a shotgun. Even the Egyptian villain is weirdly sympathetic. His fanatical devotion to a barbaric religion so obsolete that it appears to consist of himself and a dead guy is downright Pre-Islamic State, but he truly means it in a completely unselfish way. And a special mention must go to the sets. Although the outdoor scenes were obviously shot in studios, enough money and design skill was lavished on them for their intense colours and general air of unreality to enhance the dreamlike horror of the wildly implausible situation.