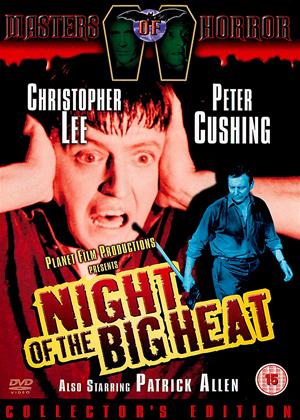 Rent other films like Night of the Big Heat

Reviews (1) of Night of the Big Heat

The teaming of Christopher Lee (Hanson), Peter Cushing (Callum) and Terence Fisher (Director) often means great things. Praised and in some cases worshipped for his work on Hammer’s early Dracula and Frankenstein films, Fisher’s magic wasn’t all-reaching – in my view, subsequent Werewolf and Mummy films were a little dull. So too, were Fisher’s occasional exercises in sci-fi.

That this is a low budget affair is not an obstacle – the effects are crude but charming, and very brief. Planet Films were a short-lived company who often managed to attract big names, despite distributing more films than they produced. The fact is, it is very talky. Very talky indeed, despite the urgency the cast injects. Patrick Allen gruffly plays the flawed hero, Sarah Lawson as his loyal wife Frankie, very often undermined by the cocky Roberts. In fact, this love triangle is more interesting than the central plot, which sees the reliable Cushing relegated to a secondary role and Lee doing his usual grumpy academic. William Lucas, Kenneth Cope and a miss-spelled Percy Herbert also star.

Additional dialogue is provided by prolific Pip and Jane Baker, who went on to oversee the departure of Colin Baker and subsequent arrival of Sylvester McCoy in late Eighties Doctor Who.