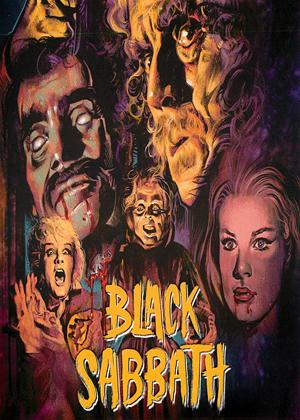 Synopsis:
"Black Sunday" was such a huge hit that a follow-up was swiftly demanded, and horror maestro Mario Bava duly devised this three-part horror anthology blending modern and period stories.
In the giallo-style 'The Telephone', a woman is terrorised by her former pimp after his escape from prison, and tries to escape him with the help of her lesbian lover, who has a dark secret of her own. In the Victorian-era 'The Drop of Water', a nurse steals a ring from the corpse of a dead spiritualist, which naturally tries to get it back. But it's the 19th-century Russian story 'The Wurdalak' that comes closest to Bava's earlier classic, with the great Boris Karloff as a much-loved paterfamilias who might not be entirely what he seems.
Actors:
Michèle Mercier, Lidia Alfonsi, Boris Karloff, Mark Damon, Susy Andersen, Massimo Righi, Rika Dialina, Glauco Onorato, Jacqueline Pierreux, Milly, Harriet Medin, Gustavo De Nardo, Milo Quesada, Alessandro Tedeschi
Directors:
Mario Bava
Producers:
Salvatore Billitteri, Paulo Mercuri
Writers:
Mario Bava, Alberto Bevilacqua
Aka:
I tre volti della paura
Studio:
Arrow Films
Genres:
Classics, Horror
Countries:
Italy, Classics, Horror

Like all portmanteau horror films, this one suffers from some of its segments being far better than others. And since it has only three parts, the fact that one of them's a waste of celluloid is more of a problem than usual. "The Telephone" is a sleazy little thriller which isn't really horror, except that a woman is threatened by a killer. She also takes her clothes off quite a lot, and lesbianism is involved. Mario Bava's direction is as competent as always, but there's precious little material to work with here, and most of it is an excuse for gratuitous female nudity. By the way, since there are so few characters, the inevitable twist is even easier to guess than usual.

"A Drop Of Water" is properly atmospheric, and this time the woman in peril is more concerned with the trouble she's in than finding excuses to take off her clothes, but again, there's basically no story. A person tempted by greed steals a valuable ring from the corpse of somebody who obsessively believed in spiritualism. This happens in a horror movie. Can you possibly guess what happens next...? The manner in which the thief is haunted, though rather primitively realized in special effects terms by modern standards, is genuinely nightmarish, but it's all style and no substance: somebody does a bad thing, a ghost gets revenge, the end. It looks very much like an idea for a movie that they couldn't flesh out to full length so it ended up here.

What sets the film apart is "The Wurdalak". Nearing the end of his career (this was the last film in which he was able to hide the fact that his arthritis was so bad he was having trouble walking), Boris Karloff is simply magnificent in the only screen portrayal to date of a vampire straight from genuine Eastern European folklore, rather than the mangled version of it Bram Stoker cobbled together for "Dracula". Set in a strange, stylized Grimm's Fairy Tales environment, it explores the idea of vampirism as a plague which turns people into evil opposites of their former selves bent on infecting their loved ones. How hard must it be, even after the truth ought to be painfully obvious, for somebody to accept they must kill a spouse still sentient enough to claim there's nothing wrong with them, or mutilate the corpse of their child so that it won't rise again as a monster? The modern craze for zombies has sometimes addressed this dilemma, but here we have the purest treatment ever of it in a vampire story. And Karloff really is superb.

So basically this movie is one-third a star and a half, one-third three-star scary, and one-third five-star in a class of its own. I know the average of those scores makes it a three-star film, but the Karloff bit is so good I'm bumping it up one.

This is an anthology film directed by Mario Bava, and contains three stories framed by direct-to-camera pronouncements from Boris Karloff.

The first segment, ‘The Telephone’ is a very entertaining, if rather contrived, giallo-styled thriller featuring Rosy (Michèle Mercier), a French prostitute, her friend Mary (Lydia Alfonsi) and pimp Frank (Milo Quesada). An excellent mish-mash of broken friendships healed, relentless abusive phone calls and murder. In number two, ‘The Wurdalak’, a family is plagued by a curse that appears to have afflicted the father Russian nobleman Gorca (Boris Karloff), which he brings home with him. Finally, ‘The Drop of Water’, set in 1910, features Nurse Helen Chester (Jacqueline Pierreux) who pays the price for stealing a ring from the finger of a corpse in her care.

I am not a huge fan of the colourful, darkly gaudy cinematography championed either by Bava, or later Dario Argento for projects like ‘Suspiria (1977)’. Such an approach reduces the reality of the horror, which itself is difficult enough to convey with any measure of authenticity anyway. You are never allowed to forget you are watching a professional production, with actors rather than people, so heightened is the ultimate effect. This is just my opinion of course, and who cares about that?

Having said that though, I thoroughly enjoyed ‘Black Sabbath’ a lot more than I expected to. Possibly Bava’s approach works for me here so well because the stories, by their nature, are concise and bite-sized: each story is being relayed as opposed to being ‘real’. And the wonderful use of primal colours here gives each tale a ghostly fairy-tale look which is very evocative.

Much tinkering with the format befell this production for various around-the-world sales. The American version, for example, changes the order of the stories and removes all mention of prostitution from ‘The Telephone’ (Frank is merely a ghost rather than a pimp). Bava wanted the final scene to have been Nurse Chester’s corpse, but this was also changed before production wrapped. So an utterly ingenious idea was had to feature Karloff signing off (just as he had opened the film), but in character as Gorca, before the camera pans away to reveal the horse he is riding to be nothing more than a prop, and the production crew running round waving branches to simulate the animal’s motion. Such a jarring ‘to camera’ reveal has spoiled many horrors in the past (Bela Lugosi’s ‘Mark of the Vampire’ and ‘Return of the Vampire’, for example), but works really well here because it merely accelerates the heightened reality rather than pull it out of thin air. An excellent, highly recommended anthology.