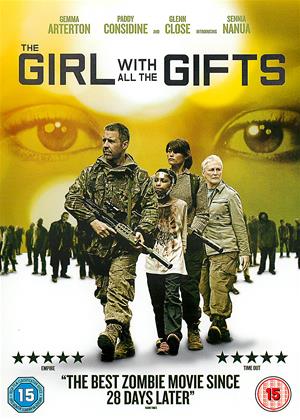 Synopsis:
The near future; humanity has been all but destroyed by a mutated fungal disease that turns its victims into flesh-eating "hungries". At an army base in rural England, a group of immune children are being studied, subjected to cruel experiments by biologist Dr. Caldwell (Glenn Close). The children attend school lessons daily, guarded by the ever watchful Sergeant Parks (Paddy Considine). But one little girl, Melanie (Sennia Nanua), stands out from the rest. She excels in the classroom, is inquisitive, imaginative and loves her favourite teacher Miss Justineau (Gemma Arterton). When the base falls, Melanie escapes along with Miss Justineau, Sergeant Parks and Dr. Caldwell.
Against the backdrop of a blighted Britain, Melanie must discover what she is and ultimately decide both her own future and that of the human race.
Actors:
Gemma Arterton, Glenn Close, Dominique Tipper, Anamaria Marinca, Paddy Considine, Sennia Nenua, Lobna Futers, Daniel Eghan, Anthony Welsh, Fisayo Akinade, Stacey Lynn Crowe, Ross Green, Elise Reed, Tessa Morris, Amy Floyd, Pete Buzzsaw Holland, Richard Price, Zak Holland, Matthew Smallwood, Alex Reed
Directors:
Colm McCarthy
Producers:
Camille Gatin, Angus Lamont
Writers:
Mike Carey
Aka:
She Who Brings Gifts
Studio:
Warner
Genres:
British Films, Drama, Horror, Sci-Fi & Fantasy, Thrillers
Countries:
UK

Rent other films like The Girl with All the Gifts

Reviews (5) of The Girl with All the Gifts

I don't like horror films, including zombie movies, so just reading the synopsis of this film should really put me off. But I loved the book, and knew it was not a typical zombie story. The film brilliantly trashes any genre expectations - you care about the characters, especially the protagonist, Melanie.

Really, don't waste your time. Totally ridiculous plot and and the acting was worthy of a village amateur dramatics society. What was Glenn Close thinking?

I am fed up with zombies film and that one was particularly silly. I am very sorry that actors with talents wasted their time and maybe risked their career for that! If Glenn Close needs money, she should try the theatre.

Worth a watch. - The Girl with All the Gifts review by RP

Firstly, this isn't a zombie film. Like '28 Days later', the humans are infected! Zombies are the living dead, there's a big difference, especially with this film!

Secondly, it's a low budget horror film and I find low budget horror films worth a watch on occasion. I must admit that I put off watching this film thinking it would be boring and too similar to 28 days later. But, I was pleasently surprised and glad I watched it. '28 Days Later' is still far better, but I've seen that fim enough times and it was refreshing to watch a horror film that isn't all about BANG scares. This film gets you thinking.

I enjoyed this film. Provided you can suspend your disbelief, then the hokem story about people turned into flesh-eating zombies by a fungal virus is very timely and relevant.

Stronger at the start than later on but still good fun with a few laugh-out-loud lines.

The Girl with All the Gifts is quite the zombie experience, a standout if you will in an overexploited genre that becomes more and more saturated by the minute. But, when you think you’ve seen it all: you haven’t actually - The Girl with All the Gifts by Colm McCarthy, also penned and adapted for the screen by Mike Carey, is a worthwhile addition to the zombie genre that feels fresh and has less to do with flesh-eating ghouls and focuses more instead on the question of morality in a world of such, with few twists of the convention thrown in there for good measure.

Needless to say, while having its decent amount of flaws - The Girl with All the Gifts is a good film.

The story features a most peculiar girl named Melanie (Sennia Nanua) getting strapped in a wheelchair all by herself (for reasons unbeknownst to us), after which a heavily armed military personnel drives her off to an improvised classroom where she, together with a bunch of other children finding themselves in the identical predicament – learn 6th grade material including the periodic table of elements, Greek history and so forth. The kids are treated differently, and it soon becomes clear why, which is the sole core of the film and I will not spoil it for you.

The zombie formula borrows heavily from a certain game called The Last of Us: humans whose nervous system gets hijacked by a certain fungi become, more or less – brain-dead, flesh-consuming cannibals. However, the smart remaining survivors developed a method to hide, or rather – mask their trails in the presence of these ghouls. Since the zombies’ (who are not referred to as such in the film) primary sense is smell, the soldiers utilize a blocking gel which makes their scents invisible to the horde. And this would be all fine and dandy, if not for a larger threat looming over the survivors’ heads: the fungi infection is just part of a single phase, whilst the several that follow can altogether mean the end of humanity.

Ok, so the visuals. The Girl with All the Gifts is filmed in a minimalistic, meditative kind of way (excluding the scenes with blood and shootings). A certain amount of CGI is present, but nothing too excessive that would detract from the overall experience. The barren landscape is done so well that it almost feels as if you’re entering the picture on your own merit. Add to that the combined camera shots that give off that eerie feeling that something is very, very wrong and you’ve found yourself a zombie winner.

Overall, The Girl with All the Gifts is very well made, with music that send chills down one’s spine and cinematography to be remembered for years to come.

By all means imaginable – a must see.