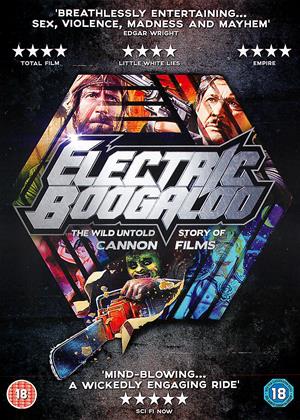 Rent other films like Electric Boogaloo: The Wild, Untold Story of Cannon Films

It's all done in the best possible taste - Electric Boogaloo: The Wild, Untold Story of Cannon Films review by Count Otto Black

This is the story of what was probably the worst film studio ever to inexplicably make huge amounts of money. Menahem Golan, a director/producer who seems to have combined in one person the worst character traits of Alfred Hitchcock, Sam Peckinpah, Roger Corman and Ed Wood, along with the determination to make films of all of them combined (he doesn't appear in this documentary except in archive footage), with the help of his cousin Yoram Globus, a less outrageous character who fades into the background but seems to have provided a much-needed voice of reason, made a ridiculous number of movies, just about all of which were unbelievably bad, and which usually combined outrageous violence with gratuitous female nudity. What's not to like?

Well, obviously Golan himself, who seems to have been an appalling human being, even if you don't believe the story of how he persuaded an exhausted actor to keep working by threatening him with a machine-gun! And yet this tenth-rate studio ended up making wannabe blockbusters like the fourth Superman movie with Christopher Reeve, and even the occasional sumptuous art-house Shakespeare opera film. But of course they were far more likely to give us an hour and a half of Chuck Norris blowing up Arabs. Oh, and they single-handedly invented the ninja movie, for which we're all no doubt grateful.

What makes this documentary worth seeing is the footage from all those ludicrous films Cannon made, some of which I'd never even heard of because they sank without trace the moment they were released. But the most ambitious of their movies, almost all of which were dismal flops, had outrageously bizarre plots, often mashing up two obviously incompatible genres - "Lawrence Of Arabia" meets "Wacky Races", for example - or assumed that if you combine hostile extraterrestrials, vampires, and gratuitously nude gorgeous women not just in the same movie but in the same character, hire a cult director, and throw immense amounts of money at it, it can't possibly fail to be a massive hit. Though strangely, "Lifeforce" wasn't.