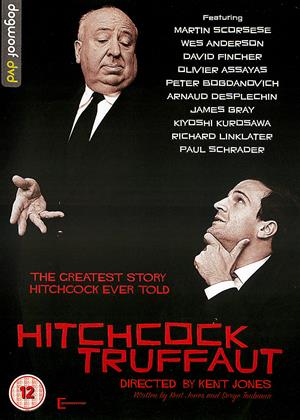 Judged purely as a film, this is no more than a TV-style documentary with notable directors talking about Hitchcock’s films, together with extracts from the famous week-long interview that resulted in Truffaut’s ground-breaking book on his work. For anyone who loves cinema it’s nevertheless a fascinating document. Both directors were great filmmakers who believed, in Hitchcock’s words, in ‘pure cinema’. There are plenty of great clips from Hitchcock’s films to illustrate this, with extended analyses of Vertigo and Psycho. The extras, including Q&As with director Kent Smith, are also worth watching.

Not so long ago, I rented "Electric Boogaloo", a documentary about the almost unbelievably trashy Cannon Film Studio. I found it very useful, because it alerted me to the existence of many gleefully absurd B-movies I'd heard of vaguely or not at all, some of which turned out to be a lot of fun to watch all the way through. This documentary might serve a similar purpose if you're not terribly sure why Alfred Hitchcock is famous because you've never seen any of his films. Though if that's the case, you probably don't know who François Truffaut was either, so you won't rent a movie about the two of them talking to each other, will you?

Assuming you do know a bit about Hitchcock's work, I'm not sure you'll learn an awful lot more here. The problem is that it's a tribute rather than a critique, therefore Hitchcock can do no wrong. One especially absurd segment discusses the strange, dreamlike quality Hitchcock evokes by using back-projection that isn't perfectly realistic. If you're familiar with movies from that era, you'll know that back-projection never, ever looked totally convincing because technically it wasn't possible at the time. Hitch was simply doing the best he could with the available resources. This is particularly apparent with some of the over-ambitious blue-screen shots in "The Birds". Turning an unavoidable technical flaw into a signifier of genius because you're convinced Hitch could walk on water isn't a very helpful approach, to put it mildly! Then again, that DVD box cover up there plugs the film as "The Greatest Story Hitchcock Ever Told", which is the title of a biopic of Jesus Christ with the word "Hitchcock" added...

A great deal of the information we're given is pointless because it's self-evident from watching the films. "Vertigo" is mostly about a man obsessed with persuading a woman to pretend to be another woman who unfortunately happens to be dead - do we really need to have it spelled out to us that necrophilia is a major theme in this movie? On the other hand, anything which might reflect badly on Alfred The Great simply isn't mentioned. For example, his inferiority complex about being a fat ugly man, which caused him to treat beautiful women abominably. Once you know that, it helps you understand certain very peculiar scenes in his films ("Marnie" for example) a lot better than the statement that he had a thing about people falling from high places, accompanied by a montage of clips of people suffering or nearly suffering that fate, which is roughly as useful as pointing out that Zack Snyder likes it when men in tights punch robots. And do we really need to be told yet again why "Psycho" was a game-changer when it came out in 1960?

This documentary is like one of those articles, now thankfully extinct, in which somebody tries to explain why "Sergeant Pepper" is the greatest album ever made, and therefore flawless. If you already know Hitchcock's work, you don't need to watch this. If you don't, rent a few of his movies and judge for yourself whether they're any good. If you think not, 80 minutes of the man himself and some of his most famous fanboys explaining why you're wrong is unlikely to change your mind.