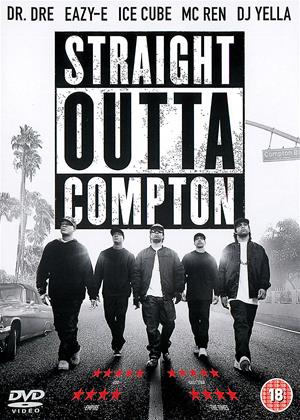 A story well told - Straight Outta Compton review by AM

Oh, this is good. Not ground-breaking, outstanding, but just really good story-telling. And the story is worth recording. Even if you don't listen to hip-hop, rap, or any of the various sub-sets that spin off this, if you are under 50 you will have heard at some point music (produced written or performed) by the central 3 performers in NWA. Their rise, with accompanying controversy (in spades), deaths (several), and old fashioned rocknroll excess is lovingly detailed here. It holds the attention, entertains, and at the same time reminds everyone where race relations where in the US in the 80's and 90's (I'll leave it to you to judge how far things have progressed since).

The three central actors are astonishingly good. They are playing icons, yet they've barely the beginnings of a career between them. Two have a collection of bit parts, while Ice Cube is played by his son, who is making his film debut.

If the film has a flaw, it is that it is produced by Dre and Ice Cube, and I can't help but feel it maybe shows in the script. In the film, NWA's genius is clear - Dre does the tunes, Ice Cube the words, Easy-E is taught to perform by Dre and the rest are bit players. Was it quite as clear-cut as that?

Loved it,just goes to show,no matter how tough it is were you grow up you can make it

Also i understood what they were saying and i am not american,i also understand brummie, scouse,mancunian and cockney

This film may be great, but I just couldn't understand the dialogue. - Straight Outta Compton review by RS

Two hours and forty seven minutes of African American street slang. It looked good, but I'm afraid I just gave up because I couldn't understand it.

At a time when race relations are growing ever hot in the disconnect with police, a movie on the N.W.A seems all too timely. The group’s iconic angry lyrics of “F--- the Police” hold true in a climate where there is bitter tensions of race and class. The music resonates with passion and rage just as much now as it did during the early 1990’s. Straight Outta Compton feels very much an appropriate movie for such times display where such energy and inspiration was birthed from. It’s this perspective that lets us know why the song had to be called “F-- the Police” and not “F-- Only the Bad Police.”

Do I like rap music? Not really. Do I think all police are terrible? Of course not. But from N.W.A’s experience, they felt the need to paint broad strokes to be bold and generate questioning. After being stopped by police outside the studio for having the appearance of gangbangers, they promptly head back into the studio to compose their most famous song. Their heated and furious approach leads them down some dark paths, but it certainly makes for a fascinating story of musical talent that rose from streets of crime.

While gangster rap wasn’t exactly invented by N.W.A, it was popularized by this ensemble that delivered lyrics both honest and savage. The legends of the genre were all assembled that included the likes of MC Ren (Aldis Hodge), Dr. Dre (Corey Hawkins), Eazy-E (Jason Mitchell), DJ Yella (Neil Brown Jr.) and Ice Cube (O’Shea Jackson, the son of Ice Cube no less). All the roles are filled out nicely by an exceptional group of ringers. There are even appearances by other famous names that piggybacked off the success of N.W.A. such as the young Suge Night and Snoop Doggy Dog.

But the movie really lets us dig deep into this group itself from their small beginnings as poor DJs to the complicated mess that comes with fame. For as much as Straight Outta Compton aims to rile up the masses, it also paints an honest and uneasy portrait on the lives of the group members. We see Dre’s desire to aspire to something higher as life continues to beat down on him with responsibility. He desperately wants to make his voice be heard and original - leading to his eventual succession from the group to go solo with his album The Chronic. We see Ice Cube’s raw anger at being a lower member on the N.W.A. totem pole which led to his bitter bites from a solo career. Even Paul Giamatti is in top form as their manager that is all about their music, but only as far as the money will take him. Safety is not in his contract.

The breakout actor of the film is clearly Jason Mitchell. In the role of Eazy-E, he has his work cut out for him in how the movie focuses on his AIDS that slowly claims his life prior to the birth of his child. It’s amazing to see Mitchell pull off this role with flying colors. From his first frightening encounter with gangsters to his final moments of coming to terms with his mortality, he never misses a beat and paints a fully realized version of the rapper. You really do feel sorry for the guy even with his amoral nature that remains a constant.

This brings up the most appealing part of the movie in how it never caters to one tone or perspective of N.W.A. Sometimes it’s dramatically staged with feuds in the studio and other times it appears vibrant as a rap video with parties and strippers. Doing so encapsulates multiple angles to examine of the group’s fame from the American dream, to race discourse, to the dangers of gangster rap culture. And, of course, it features plenty of their songs perfectly performed by the actors. Rather than being scattershot for covering such a wide ground, director F. Gary Gray punctuates all these historical bullet points with raw emotion that rarely falls flat. The only areas where it falters briefly are the moments that come as big winks at the future that awaits these rappers.

Even if you’ve never listened to N.W.A. and have no plans to in the future, there’s plenty to please in this solid biopic. That’s the mark of a truly great movie - one that can evoke a plethora of emotions for a subject you may not find appealing. It’s a great story with great actors throwing everything that they can at the screen. It also has so much to say that it’s going to warrant another viewing just to examine all its details in character and story. This is a fantastic movie that far exceeds its rally cry for the reflecting nature of our current societal ills.