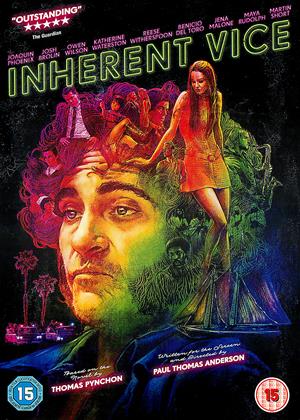 This is the first attempt to bring one of Thomas Pynchon's massive, labyrinthine novels to the screen, and it has all the problems you might expect. The plot, in which a permanently stoned private eye stumbles into increasingly elaborate interlinked conspiracies while around him the Swinging Sixties curdle into the Selfish Seventies, is frequently baffling. Just about everybody in the film is either part of this vast shadowy enterprise or is coincidentally linked to it, but it's impossible to keep track of how it all fits together. Supposedly major characters barely appear in the movie, and one very important plot thread involves the murder a long time ago of somebody who isn't in the movie at all by somebody who suddenly pops up towards the end, by which time the narrator has to remind us who he is and why should we care about him. I couldn't even figure out whether the hero was meant to be a doctor who somehow gets away with being a private eye instead of making the slightest attempt to do his actual job, or a private eye whose office is in a hospital for some reason that's no doubt hilarious if you what it is because you've read the book.

It's fascinating, in a slightly infuriating way, but also oddly un-cinematic. People talk to each other at length in order to cram in as much of Pynchon's weird but superbly crafted dialogue as possible, but too often we're told about something we don't actually see. A supposedly dead but very much alive rock star talks about his career but we never see him play. A huge gang of neo-Nazi bikers are set up as adversaries and lurk menacingly in the background but do almost nothing that we ever witness. A mysterious ship is constantly referred to and glimpsed in the distance but we never see what happens on it (though somebody does tell us). And most bizarrely of all, in a film featuring constant drug use, a bad trip crucial to the plot is represented by the camera going out of focus!

Paul Thomas Anderson was presumably chosen because "Boogie Nights" is the quintessential cynical seventies movie, but maybe if they had to have a director called Anderson, they should have gone with Wes? Because this film gives us an oddly twisted vision of the early seventies, in which authority figures are one-dimensional mad fascists, women are one-dimensional sex-toys, 99% of hippies are heroin addicts, and every voice you hear is Thomas Pynchon talking through a sock-puppet with a ludicrous name. This works far better on the page than it does on the screen, especially with a hero who is nearly always stoned and tends to mumble. We need some amazing though not necessarily realistic visuals to distract us from these shortcomings, and we simply don't get them.

"The Big Lebowski" is very similar but better, with much more interesting and engaging characters. Robert Altman's weird take on "The Long Goodbye" has a lot of almost identical plot elements (including a very major one which "Inherent Vice" basically turns back to front), and gives us a more realistic but equally cynical view of the early years of the Me Decade. And I think perhaps "Inherent Vice" is halfway trying to be the third film in the "Chinatown" trilogy that never got made after "The Two Jakes" flopped. Unfortunately, in the end it's an ambitious attempt to create something extraordinary that doesn't quite come off.

It's taken me a while to warm to Anderson as a director: I thought "Boogie Nights" was ho-hum and loathed the arrogant pretentious soap of "Magnolia", but really sat up and took notice at the grandeur and dark beauty of "There Will Be Blood" and even the skewed, frustrating "The Master". So, when I heard he'd done a Pynchon adaptation I was verrrry interested. I'm not a huge Pynchon fan: I've read two of his novels, including nine months spent getting through "Gravity's Rainbow", but he intrigues me, and it sounded like this was going to be a great, intelligent and complex 70s noir thing to equal "The Big Lebowski" or even "The Long Goodbye".

This is, in fact, a long, dull, deadly disappointing trudge of a film, that paradoxically crams in too much plot and somehow ends up with none. A great cast is utterly wasted, relationships and chemistry are non-existent, and characters mill about and unload wadges of exposition by either whispering or mumbling or both. There is absolutely no texture or context to this whole thing, none of the cinematic language that would be needed to evoke any sort of atmosphere. Nobody seems to really have anything to do with anybody else as faceless and dull characters drift in and out and in again. There's an oh-so brief flicker of style when Martin Short appears as a coked-up dentist and for about a scene everything goes up a gear into a coke-paced, paranoid frenzy, but then it's back to people mumbling and/or whispering plot points to each other. More criminally, there is absolutely no effort to evoke any sort of period or sense of history. I'm pretty sure Pynchon chose the era with care, that teetering epoch between the dog-ends of flower power and the rise of Nixon and the Moral Majority, but this film doesn't seem to give a toss. Like everything else, it's left at the side of the road on this long, hard slog.

A dreadful, dreadful waste of time, talent and film stock.

I stopped watching this film after about forty minutes because the plot was hard to follow, and (more importantly) I could not understand the mumbled dialogue. I fail to understand what the voiceover describing what the viewer could already see on the screen was meant to contribute to the experience. Paul Thomas Anderson used to make good movies, but now he makes self-indulgent tosh. There are far better movies to occupy your time.

Inherent Vice plays as a stoner detective film in the most lucid methods of storytelling. As the first film adaptation of a Thomas Pynchon novel, director Paul Thomas Anderson has crafted his most overloaded and zaniest film yet. Anderson stated that he drew inspiration from a variety of sources including The Big Sleep, Airplane! and Cheech & Chong’s Up In Smoke. It certainly does feel like he crammed all these elements into a blender and then let it overflow to two and a half hours. The result is an admittedly messy splattering of colorful characters in quirky scenes, but there’s just something so admirable about this playful and nearly incoherent film.

Set in California during 1970, beach-based hippie Doc (Joaquin Phoenix) finds his profession as a private investigator growing too quickly for both him and the audience. His ex-girlfriend Shasta strolls in with a case of preventing her new lover, real estate mogul Mickey (Eric Roberts), from going into an insane asylum. The plot to chuck him in the looney bin is conspired by both Mickey’s current wife and his wife’s boy-toy. But as Doc begins searching for leads and clues, he’s then roped into finding one of Mickey’s bodyguards as well. And as soon as he starts work on that case, he becomes mixed up in a murder case. The storyline just continues to build and build on Doc’s piled up cases - constantly throwing in more plots to juggle from upper class drug dealers to strange religious cults.

Doc spends most of the film stoned as do we in how the events are presented. The film is an endless series of various actors intersecting the plot, adding layers upon layers to this strange world. Josh Brolin plays a no-nonsense police detective acting as Doc’s strange rival. He’s disgusted by the hippie culture, obsessed with phallic snacks and allured by a Japanese restaurant’s pancakes (“Motto panucaku!”). Owen Wilson plays an undercover agent who speaks in the shadows of conspiracies and his past life. Martin Short play a wealthy business owner who doubles as the most wacky drug dealer. All of them dole out information from scene to scene in textured dialogue that grows increasingly hard to follow as a cross between a Hunter Thompson tale and The Big Lebowski.

In the great tradition of stoner films, Inherent Vice is a mess of characters and events. Some characters meet and some events intersect, sometimes three or four at a time. Other times none of them have anything remotely to do with one another - some left on the shelf as unresolved arcs. It could be considered a wild ride if it weren’t for the fact that the entire film is comprised of conversations that stroll in and out of the story, becoming lost in their own wordplay. There are some murders, some sex and other strange events that occur, but most are brief and off screen as we try to keep up with Doc tossing himself around this tapestry of intriguing developments (or at least seemingly intriguing). Or are certain parts of this just a hippie’s hallucination? Damned if I know and damned if Doc does either. We’re both just passengers on this warped little journey.

This is one of those movies that is very hard to describe and even harder to form an opinion on. I relate this film on a similar level to Roger Corman’s The Trip in which Peter Fonda does some acid, finding himself struggling and stumbling around town in a daze. You’re not quite sure what you’re seeing and what it’s connecting towards or building to. It’s just plain weird. What I can say for sure is that I dug the characters of Inherent Vice and its farce of a script. Anderson makes most every player a memorable one and provides them a stylish enough canvas to work with. There’s nothing quite so grand as in The Trip when Dennis Hopper dons a robe on a mountain, but still solid set pieces nonetheless.

I never recommend that a film is enhanced while under an influence, but Inherent Vice dares me to think otherwise. This is stoner storytelling on hard mode the way it flows from one subject to another with minute fragments of continuity here and there. The dialogue is kept very vague and much too deep for anyone who is a square. I tend to dig on poetic passages of dialogue, but this script just goes overboard with its fascination at dressing up a detective story with 70’s counter-culture phrasing. It’s a film best not to dwell on too long and just enjoy the segmented performances of an all-star cast. It’ll make the two and a half hour running time go by much faster.