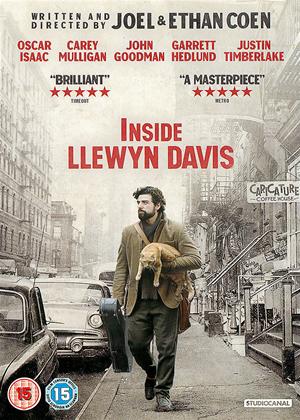 Synopsis:
'Inside Llewyn Davis', the new film from Academy Award winners Joel and Ethan Coen, follows a week in the life of a young folk singer as he navigates the Greenwich Village folk scene of 1961. Llewyn Davis (Oscar Isaac) is at a crossroads. Guitar in tow, huddled against the unforgiving New York winter, he is struggling to make it as a musician against seemingly insurmountable obstacles - some of them of his own making. Living at the mercy of both friends and strangers, scaring up what work he can find, Llewyn's misadventures take him from the baskethouses of the Village to an empty Chicago club - on an odyssey to audition for a music mogul - and back again.
Brimming with music performed by Oscar Isaac, Justin Timberlake and Carey Mulligan (as Llewyn's married Village friends), as well as Marcus Mumford and Punch Brothers, Inside Llewyn Davis - in the tradition of 'O Brother, Where Art Thou?' - is infused with the transportive sound of another time and place.
Actors:
Oscar Isaac, Carey Mulligan, John Goodman, Justin Timberlake, Ethan Phillips, Robin Bartlett, Max Casella, Jerry Grayson, Jeanine Serralles, Adam Driver, Stark Sands, Garrett Hedlund, Alex Karpovsky, Helen Hong, Bradley Mott, Michael Rosner, Bonnie Rose, Jack O'Connell, Ricardo Cordero, Sylvia Kauders
Directors:
Ethan Coen, Joel Coen
Producers:
Ethan Coen, Joel Coen, Scott Rudin
Writers:
Joel Coen, Ethan Coen
Others:
Joel Coen, Ethan Coen, Bruno Delbonnel, Skip Lievsay, Peter F. Kurland, Greg Orloff, Paul Urmson, Greg Orloff and Peter F. Kurland
Studio:
StudioCanal
Genres:
Drama, Music & Musicals
Awards:

Reviews (5) of Inside Llewyn Davis

The best Coen brothers film EVER! Great for all cat lovers, music lovers and the Welsh! - Inside Llewyn Davis review by PV

I LOVED this film - just adored it - and know I shall watch it again, probably several times. I don't always agree with Cannes Grand Jury Prize-winner decisions - but this film deserved that award, and more too!

Partly, I liked this film because I am a music lover and a cat lover - and this movies revolves around music in 1961 Greenwich Village (when Bob Dylan was just emerging). The subplot of the cat - or maybe it's more than a subplot - is hilarious and relies on an old British 1970s plot twist after a pet someone is looking after for others goes missing.

There are also some in-jokes about Wales and the Welsh which I think are there as a reference to Bob Dylan (who famously took his surname from Swansea poet Dylan Thomas) - though the first name Llewyn itself is actually mispronounced throughout.

But really, despite the hilarious comedy, and the wonderful dialogue and characters, this is ultimately a story about grief - the grief of a man realising he is a failure. It's a Man versus the Monster movies really - the Monster being the music business and Fate itself, which leaves Llewyn Davis alone and struggling in harsh, cold, cruel world.

I could watch this film again right now (with subtitles again to pick up all the song lyrics). Several times.

Brilliant, wonderful, unique film-making - and there's a cat or two in there too! Five stars with bells on and harmonies!

Although it has the the advantages of being a Coen masterpiece, I particularly enjoyed the atmosphere brought about mainly by the camera work and muted hues. The low contrast presentation add magnificently to what is a tale of a good folk musician unable to make money in the winter of 1960.

Usually I hate musicals, but although there is a lot of music in this it is in the format of a musician performing. The other reason I hate musicals is that normally they are done by people who are not particularly good at acting and only above average at singing doing dreadful pieces composed by folk like Lloyd Weber. Oscar Isaac really can play the guitar extremely well, his singing is crude but spine tingling in its sensitivity and the music is 1960 folk but the best of it.

I agree with another reviewer (PV) about the rest particularly the cat, what a purrformance.

A real delight - Inside Llewyn Davis review by CH

The Coen Broothers get me in a weird place - possibly that is their mission - love much of their work but this one flew by me - I am aware of their style/approaches to acting/cinematography/narrative etc but mmmmmmmmmmmmm ddn't get this one at all................it felt forced, found I was drifting - found the characterisation shallow and too boldly underlined, like there was too much in house self congratulation going on - 'this is a misfit folk singer down on his luck, ha ha ha' 'this is an angry lay ha ha ha' 'this is the angry lay's smarmy boyfriend who has it all ha ha ha' - can work, in a Brechtian kind of way, but in this case, for me, it really didn't - found the cyclical narrative lazy - found the plot reductive - really irritating the way Llewyn Davis does the same exclamation each time the cat escapes - I may well be missing something really important here but then, I was bored during 'The Big Lebowski' too................

For folkies only - Inside Llewyn Davis review by Alphaville

It’s about a folk singer down on his luck. He plays an acoustic guitar. Many times. We follow his progress. There’s a lot of folk music. As with the Coen Brothers’ O Brother Where Art Thou, if you’re immune to such simple stylings, you won’t get past the first few minutes.

The title of the latest Coen brothers film suggests that learning everything about Llewyn (Oscar Isaac) is something worth taking the time to do. Not only is he a good folk singer but he has a sharp wit and an ability to shrug off rejection. These are admirable qualities but Llewyn is not an admirable person, far from it. He is kurt, abrasive, incapable of accepting criticism but more than willing to fling it out at everyone else and a complete social reject. However it’s oddly compelling watching a train wreck like Llewyn try and sort his life out, even if you know he might just shrug it off in favour of yet another distasteful and appalling act.

The film follows Llewyn Davis as he has to endure a harsh winter on the streets of New York City as he tries to reignite his singing career following the death of his partner. However when he finds out his friends girlfriend Jean (Carey Mulligan) is pregnant and it could be his he is sent into a tailspin as he tries to become accountable to people other than himself sending him on a trip across country in search of fame, fortune and the opportunity to grow up.

Although the Coen’s have crafted stories around unlikable characters before Llewyn is a whole new barrel of fish, a character with no discernible baggage, no tragic story, no unfortunate upbringing, he’s just caustic because of his own self involvement. He may be a great musician and occasionally have the right thought about the trash people produce as music but it doesn’t save him and Oscar Isaac plays into it perfectly. He understands the man and his many many flaws but he also gets how free he is.

The charm in the film is that everyone in it is free, free to do what they want with who they want and free to express themselves however they see fit. Not only does Llewyn use his love of music as a way to get away with saying just about anything but so does Roland (John Goodman), a jazz musician he meets on his travels. They see it as a release of sorts and while they galavant and do things we would deem inappropriate, Jean hides behind her music, uses it as a way to progress her ideal of the perfect life. Her music has trapped her in her many lies with Mulligan bringing Jean’s self righteous indignation to the surface in a fun and oftentimes hilarious fashion.

In the end you may feel cheated by the film but trying to figure out if Llewyn learnt anything and grew from the experience is part of the fun of not knowing and its always fun for a film to throw the audience for a loop, even in its final moments and nobody does it better than the Coen’s. The film may follow a mess but at least he’s an entertaining mess.