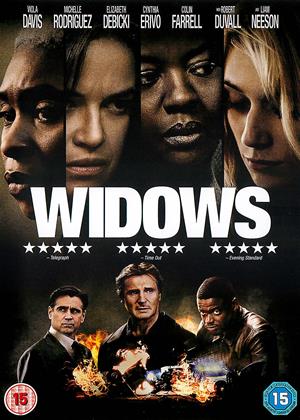 Some points about this movie which has got great reviews from the usual pc virtue-signally critics who feel they have to give a film by a black director with black actors and women starring a brilliant rating and reviews.

Unfortunately, this is a rubbish film. The massively over-rated director is only matched by the over-rated Viola David who is UTTERLY unbelievable in the role she plays. Liam Neeson's wife? Yeah right. This mixed marriage race thing may be a novelty in the mainly segregated USA but it's old hat in the UK.

Making women the bank robbers is also old hat - it was done in the far better original 1983 TV series which I watched at the time, back when it WAS a novelty (even though NO real life bank robbers are female - the wives and girlfriends just get the cash as hubbies go to prison lol!)

This is basically polemic about gender and race, box-ticking like crazy, with a few unbelievable twists and some US corrupt Chicago politics chucked in to try to give depth.

If you want to watch a GREAT heist movie then rent out SEXY BEAST; if you want a better so-so heist film then get THE HATTON GARDEN JOB. This movie of WIDOWS is rash masquerading as social statement about race and gender. If this is the future of film-making, I shall not be visiting the cinema much again (and ticket sales 26% down since Hollywood became obsessed with churning our race/gender-obsessed movies galore).

5 out of 27 members found this review helpful.

Why this is highly rated is beyond me. Unexceptional dialogue and acting . No interesting plot devices but above all boring. I remember enjoying the tv series in the eighties and it’s probably dated but I imagine it’s superior to this twaddle. There are scenes that insult your intelligence.

Don’t be fooled by the trailer, which shows nearly all the brief action and adds an atmospheric score that the movie sorely needs but sadly lacks. Widows is thrill-less, virtually score-less, prosaic film-making, bogged down plotwise in politics and religion and visually in still shots of actorly conversations. Thrilling? If only. It’s a completely cold watch, with no characters of any interest and no visuals of any interest. It’s a film that needs a real director at the helm, not a faux-art Turner-prize wannabe filmmaker like Steve McQueen.

PS US critics loved this film while trashing the much superior Replicas, an indie sci-fi film I saw on the following night and a cinematic masterpiece by comparison. If cinema is to outlast the inroads of such as Netflix, they need to get their act together.

Just couldn’t get into this. Tried for half an hour and then abandoned it, something I’ve not done before. I usually persevere expecting a film to get better or at least watch it because I’ve paid for it but not this time.

Much better than I thought! - Widows review by HM

Not your usual heist movie; a tangled plot gives plenty to be interested in. The characters stand alone well and do not merely prop up the plot. Fine performances all round. Criminals' wives are pressured into getting their hands on money to stave off a gangsters' desire to get his money back stolen by their husbands. Exiting, action, plot; the lot. Deffo worth a viewing.

A very difficult film to categorise and describe - a thought-provoking, intelligent thriller with enough twists to keep Chubby Checker in business for centuries.

Some truly outstanding performances, no dumbing-down and some properly evil adversaries. In fact, my only slight gripe is that I didn't truly feel able to connect with the main female lead. I truly admired her determination, fight and ruthlessness, which were brilliantly portrayed, and perhaps so well done that I didn't feel I could warm to her. I understand, but don't empathise.

Nonetheless, a refreshingly brilliant take on a classic genre.

Waste of 15 minutes of my life - Widows review by PB

Would have given zero, but 1 star lowest. Don't normally write reviews but this film had nothing for me, turned off at 15 minutes in. Slow wandering

This was so disappointing. I read the book and couldn't put it down, it was so good. The film bears very little resemblance to the book and the action jumps around so much it's confusing. Very bad screenwriting in my opinion. If you want to try this film don't read the book first!

Better than expected - Widows review by RE

Not based on the old UK series, and doesn’t come close, but much better than I expected. Really quite an enjoyable film. Bit of action, drama, emotion, decent cast and some good acting too. Give it a go.

I want to delete this - Widows review by Denno

Well I decided to delete this review but it doesn’t look like you can which is a bit weird. I’m sure also my last review didn’t need to be 100 characters

Watched the first 25 minutes, then gave up. One of those crash-bang-wallop type American movies - Ok if you like them - a big mistake for us to order - should have read up on it first! Also the dialogue was not always easy to catch. Disappointing.