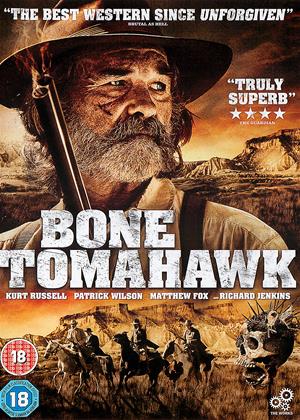 I loved this film. Whilst some of the plot aspects are a bit silly and unbelievable, I can easily forgive all that because of the general quality of the filming and acting, and the way the director has managed to keep the tension working throughout. Flawed but fun!

I thought the film was great, very well made, well shot, gritty and gruesome. It doesn't pull any punches and isn't for the feint hearted I would say. It's not entirely believable, but that occurs to you in thoughts after the film, so you can easily suspend your disbelief throughout. Great performances, good to see Kurt Russell pulling out an excellent portrayal as the hardened Sheriff.

Also thought the film, whilst a Western was quite unique in the way it approached the Genre. Whilst a different film, with a different matter (therefore not making it entirely comparable) I definitely preferred Bone Tomahawk to the Hateful Eight, and whilst this film isn't short it was far lest indulgent in my opinion than the Hateful 8.

OK so this film is ludicrous, full of plot holes - but just don't think too hard about that.

Instead, enjoy the atmosphere, the gore, the great sound effects of the cannibal Indians (or native Americans, or whatever). No doubt some will object that these people are shown as cannibals BUT they should get over themselves. THIS IS FICTION not a documentary!

Silly and unrealistic, yes. And of course there has to be a pretty blonde-haired woman in distress to rescue - who remains amazingly unmolested by brutal cannibal Indians who otherwise seem to keen to imprison women and get them pregnant.

But as I said, don't think too hard or ask too many questions! It'll give you a headache.

Just enjoy it for the period gore fest that it is. And the costumes, acting and sound effects are fab - loved the Indian screaming calls, though couldn't quite see how they'd manage to conduct the surgical operations needed to insert their whistles. See, now I'm thinking too hard again! Try not to or you'll see more plot holes than in a Swiss cheese!

Directed with leisurely assurance by S. Craig Zahler (who is also the writer), this very witty, slow-burning western/horror hybrid is compelling viewing, even when very little appears to be happening. The long, talky scenes in the first half of the film work well because the dialogue is very natural and often genuinely amusing, all played by an excellent cast. When anything horrific or brutal occurs, it does so very quickly with barely any lead-up. Blink and you’ll miss it. However, as the 132 minute story rolls on, these occurrences move increasingly centre-stage. Getting to that point can arduous at times, however, and things drag from time to time.

The locations, stunningly filmed, perfect that balance between beautiful and unforgiving terrain. It is this environment that plays host to some stomach-churning scenes, filmed completely without spectacle, and often without the comfort of incidental music.

Can this be compared to ‘From Dusk till Dawn (1996)?’ In that ‘Bone Tomahawk’ begins as one kind of film and ends up quite another, yes it can. But in other ways, not so much. Where there was an addictive sensationalist lightness to even the more gruesome moments in Tarantino’s film, here all the frivolity is saved for the earlier, character-establishing scenes. There’s no joking when the raiders show up. Although you have to wait rather too long to see them, it is worth it.

I’m not going to name specific members of the cast because everyone is excellent, and even more than that, there are no stereotypes. Far from it. Here, personality and likability wins out over young, pretty and arrogant. If you do not have believable characters, it is that much harder to get the audience to follow them, much less invest in them. This film may well have benefitted from a bit of pruning, but it is nevertheless an immersive experience, which also does something different in its approach to horror.

Could have probably been quite good, if had taken the characters along with a better plan. Some good filming and western genre spoiled by the ludicrous indians, and large gaps in the logic. Indians steal horses, but live 100ft vertically up in caves........hero has lost use of a leg but can miraculously save everyone by appearing by magic in said cave entrance, having scaled a vertical climb up shale face.

The mindless violence of the indians is not a good reflection on how even the Sioux behaved, but appears just to be for the hell of it. Mind you, the designer cave system, and cage system, showed they had some qualifications..........

We get to know a handful of color western characters portrayed by a stellar cast. Kurt Russell is perfectly cast as the grizzled town sheriff Franklin Hunt, tough and wise when it comes to handling criminals and keeping others alive. Between this role and his command in The Hateful Eight, he was born to be a western star. To save those that were taken by the troglodytes and avenge those that were brutally slaughtered by them, Hunt gathers together a team for the rescue mission that includes the bitter John Brooder (Matthew Fox) and the well-meaning old doctor Chicory (Richard Jenkins). Patrick Wilson is another welcome presence as the plucky and driven foreman. Despite having a broken leg, he hops along with crutches to save his wife from the savages that captured her.

The majority of the plot is mostly the journey of these four men heading towards the cave of troglodytes. They share stories, start feuds, take precautions for camping on the open plains and make tough choices when strangers approach. The moments of comedy, action and danger feel very fluid as the quest progresses. If you cut out the bookends of this movie, it’s a very straight western in the tradition of The Searchers. In fact, compared to many modern westerns, this section of the movie appears more classic in its writing and production. There are moments where you’re more engrossed in the tension of encountering thieves in the night than whether the four will save the captured townspeople in time.

But the moments of horrors involving the troglodytes are just as satisfying in their brutality. They bludgeon their targets with bone-made instruments and signal each other with their whistle-like screams. The spacing out of these scenes keep the movie surprising in its gore rather than be frenetic violence fest. Not a single scene with the troglodytes is left bloodless. There’s one scene in particular that goes for the ultimate of gross-out gore in which a man in scalped and sliced down the middle - a sight that shares more in common with The Green Inferno than A Fistful of Dollars. Surprisingly, the mix of western charm and graphic horror meshes well with wit and grit. It always appears to be level, never favoring one genre over the other. Such a natural grace is not something I usually expect from a concept aiming at cult-movie status.

Bone Tomahawk is a chocolate-in-peanut-butter situation where western and horror blend so very well. Call it a western soaked in bloody horror or a horror dressed up in western garb. Either way you look at it, Bone Tomahawk never bores with a committed cast and tense direction - a strange new twist with a familiar coat.