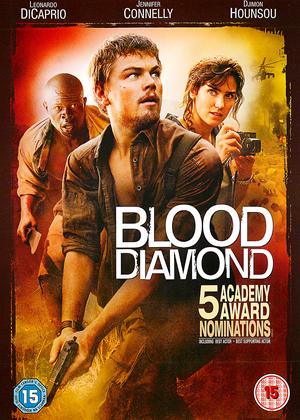 It opened my eyes in terms of Diamond Sumggling and Child soldiors. It was quite shocking to see it was based on true events at the end. I know it's not as bad these days but it's put me off buying diamonds (not that I do a lot anyway, lol!!)

Leonardo DiCaprio is brilliant as a selfish, uncaring ex-mercenary turned diamond smuggler in Sierre Leone. He exploits other people to make a quick buck and seems oblivious to the atrocities going on around him during the civil war in the 1990's. By chance he meets a local fisherman who he believes to have hidden a 100 carat diamond just before he escaped in a forced labour camp. The pair reluctantly team up to find the diamond, assisted by a feisty American journalist. The story of blood diamonds, used to finance arms for rebel forces, is revealed. The violence shown by 'soldiers' as they devastate peaceful village communities is hard-hitting and horrific. Fantastic performances, well written and ably directed, it is a brilliant, although harrowing, film. Highly recommended.

Not only was Blood Diamond a great film, it was also very informative.

Fantastic acting by DiCaprio once again.

Shows the darker side to the beautiful sparkling diamond through child fighters & adult slaves.

DiCaprio also must be commended on his South African accent, very believable!

One of the best films I've seen this year. Leonardo DiCaprio does an amazing job and somehow manages to play this complex character without turning him into the villain. There are some really harrowing scenes and this movie will really leave you thinking about the third world and Africa in particular. It doesn't pull any punches and its difficult to watch at times. Highly recommended and including what is now my favourite line from a film - I won't spoil it for you but it made me laugh so much I had to rewind and hear it again!

The level of horrific, real African style violence in this film is maximum. I have no doubt that there have been many times where this is an accurate portrayal of the life and times of South Africans. It does not make for easy viewing and you will leave the sofa at the end of this film feeling shocked, angry and bitter. Is it better to see such barbaric, savage brutality or to be sheltered and serene? Personally I would prefer to believe that it is uncommon and leave it at that. If you want to see what Edward Zwick thinks it was like, go ahead but will it make you better?