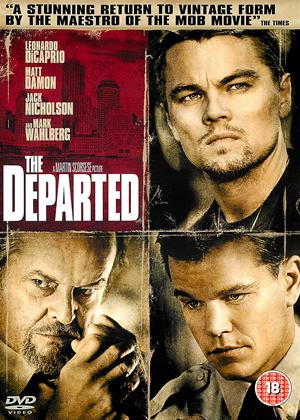 And The Oscar Goes To...
10 films by cinemadiso

Reviews (9) of The Departed

Not a Classic - The Departed review by CP Customer

Saying that this Scorsese picture is not that good is like saying that you live in a naf house in kensington. They don't exist.Putting this observation aside and only comparing this movie with other scorsese pictures, its pretty poor. Jack Nicholson is always very watchable, but seems to spend the whole movie doing a parody of himself. As for the others, Leonardo Decaprio is probably the best and seems to give it 100%, Mark Whalberg and Matt Damon seem out of their depth.Although the film moves at a good pace the plot seems clunky at times and a bit predictable. Compared to other filmmakers this picture is very good, Compared to Scorsese's other work, its very average.

One of Scorsese weakest films to date. - The Departed review by CP Customer

The Departed has got to rank as one of the most undeserving Oscar winners of all time. The film is actually a remake of the 2002 Honk Kong film 'Infernal Affairs' which itself was a decidedly average good cop/bad cop movie. Aside from the generic Scorsese direction the acting is easily the weakest part of the film. DiCaprio and Damon are fairly unremarkable, Jack Nicholson gives the same performance he does for every bad guy he plays and Ray Winstone was plain awful with a cockney/Irish/American accent which was pretty much laughable throughout the whole film. Overall, this is easily one of Scorsese weakest films to date and unfairly showered with awards, more due to guilt at overlooking Scorsese's past films than out of any real merit as a good movie in its own right.

I thought this was an exceptional piece of film making. The cast are outstanding; DiCaprio acts everyone else out of almost every scene, although Wahlberg gives him a run for his money in a couple! Nicholson is genuinely frightening as the mob boss. They are lucky to be working with such a brilliant script, and, of course, the genius direction of Scorsese. It's violent and shocking and some parts had me staring at the screen open mouthed. I didn't find it predictable, in fact there were many twists and turns. A fantastic evening's viewing and a classic must-see.

great film one film I will watched all the time

Gritty, tough, very frightening and even amusing at times, this is an American Gangster film that hits the spot. All the acting is superb but Di Caprio and Nicholson excel.

I agree with the first reviewer that this is not up there with classic Scorsese - such as Raging Bull, Goodfellas, Mean Streets, Taxi Driver or King of Comedy. It's probably not quite as good as his 'second rate' films like Casino and Last Temptation of Christ - but it's not far off (and certainly better than the Aviator and Bringing out the Dead). I thought it was an enjoyable thriller with some great scenes - but what was missing for me was strong central performances (in the mould of De Niro or Pesci). Still pretty good though.

This is a full-on mobster/cop thriller and keeps you guessing throughout. The cast are generally excelled particularly Di Caprio but Wahlberg was a bit over the top. Jack Nicolson seemed to be playing a strange version of his portrayal of the Joker; either that or a parody of himself. At one point he actually does an impression of a rat when he talking about the rat in his organisation... I found his character implausible and that kind of soured the movie for me. I've seen each of the Oscar winning best movies from the last 10 years and this was one of the less good ones in my opinion.

A cracker - The Departed review by CP Customer

The quality cast list of Di Caprio and Nicholson does not let you down with this gangster thriller set in Boston....

This genre suited Leonardo's acting best. His dilemmas and anxieties were tangible. Nicholson was good but didn't draw me in and Damon appears too wooden (better as a superhero). The plot is extremely sound (I hate one with gaps and glitches)and more importantly full of insights and unpleasant truths.