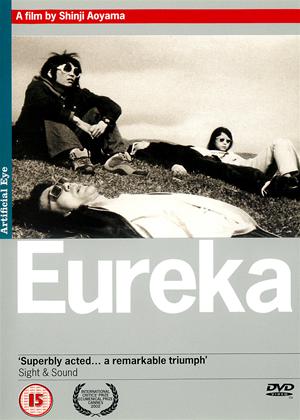 Synopsis:
When a bus is violently hijacked in a small Japanese town, only three people survive: the guilt wracked driver Makoto (Koji Yakusho), and young brother and sister, Kozue and Naoki. Two years on, each of them, still traumatised by their ordeal, struggle to reengage with life. But then one day Makoto impulsively buys a bus, and sets off with Kozue and Naoki on a long journey across Japan, which becomes a cathartic odyssey of spiritual self-discovery. Shinji Aoyama's beautifully shot drama is a serene and resonant mediation on the psychological scars wrought upon the victims of terror and violence and of the courage and inner strength they must find to survive.
Actors:
Kôji Yakusho, Aoi Miyazaki, Masaru Miyazaki, Yôichirô Saitô, Sayuri Kokushô, Ken Mitsuishi, Gô Rijû, Yutaka Matsushige, Sansei Shiomi, Kimie Shingyôji, Denden, Eihi Shiina, Yûji Nakamura, Eimei Esumi, Yôko Noma
Directors:
Shinji Aoyama
Writers:
Shinji Aoyama
Studio:
Artificial Eye Film Company Ltd.
Genres:
Drama
Countries:
Japan, Drama

The above synopsis sums up the plot, but this three hour and twenty eight minute meditation on the value of life, of forgiveness and redemption is much, much more.

The two children and the bus diver who have survived the tragic hijacking of a bus, drift towards each other two years later and end up leaving their small town to travel through Japan to see the ocean.

This is a wonderful and deep movie, full of understated emotion, and dense with passion.

A modern masterpiece of Japanese and world cinema.

Visually stunning, beautifully paced with layer upon layer within the plot as you comprehend more - a really moving film.

I was totally absorbed throughout and recommend you invest 3.5 hours - wonderful

Disturbing under a placid reflective surface - Eureka review by joannajuki

I couldn't find this film believable, as beautifully atmospheric as it was - the deep emotion and angry passion that we were to accept stepped over the boundaries of civilization.

Traumatized by the loss of their parents (It is not clear how or when their parents died), and having witnessed a bus-jack in a nearly empty bus where the perpetrator is gunned down in an empty parking lot, two children - a boy and a girl, are left mute and pathologically withdrawn. Like birth twins, they have a telepathic link to each others' feelings, even thoughts, but we don't hear them speak or comfort each other. Instead, most of the film revolves around the gutsy driver of the bus, who brings order, discipline and love to their chaotic home where they are just about surviving together.

Trying to start anew, the driver gets a job as a mechanic and there is attraction between him and a beautiful young woman there - but she is murdered. He's under suspicion and jailed, and it's not made clear how he is cleared.

He's in the cell, tapping on the wall in communication with the next cell. Then he arrives at the home of the twins. The anti-hero also arrives - a snide, arrogant cousin. But the bus driver sweeps them all up in his enthusiasm for going on the run to make a new start, in a very tastefully renovated school bus. There is a beautiful and hopeful scene of their initial exploration of the road.

But weirdly, the next pretty young woman the driver is attracted to, a waitress in a cafe, is also murdered. And when the murderer is revealed, the driver becomes violently but honourably defensive of him.

The auteur seems to be saying that the murder of (pretty female) innocents is a natural reaction, even a correct reaction, to life-threatening trauma to the male. And that self-harm and suicide is the natural reaction of a young girl to the same.

I just can't go with that. It's a little bit No.