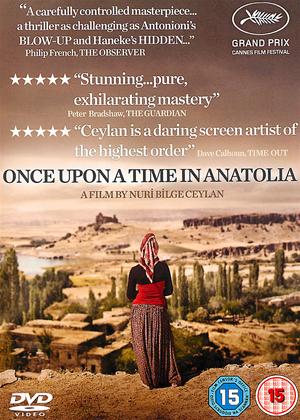 Rent other films like Once Upon a Time in Anatolia

Reviews (7) of Once Upon a Time in Anatolia

No beginning no middle no end no plot everybody here has laryngitis if you just like to look at nice scenery then this film is for you or you could just look out the window for ninety odd minuets.

Not really a crime drama. It is an amusing idea, 3 vehicles containing a doctor a prosecutor 2 diggers and a typist (among others) driving around the country at night looking for a body. There are some truly funny moments but generally it is interesting photography a strange plot (often completely unconnected) and endearing quirky characters.

Three cars and their occupants travel across a desert landscape in the dark. The cars stop periodically and the travelers emerge to seek the scene of a murder and burial....

A narrative emerges slowly, in snippets of conversation, glimpses of the barren landscape, snapshots of lives..

There is no beginning, middle or end to this film - and as others have said, it is overlong. But it is nonetheless mesmerising, the spectacular cinematography drawing you in. I, for one, was happy to go along for the ride.

This is a fascinating film which will live with long after it finishes. An interesting portrait of Turkey caught between the 21st and the 17th centuries. Amazingly shot, but not for those who like their movies crash bang wallop, this is a very slow character study of a group of middle-aged men and their relationships to other men and to (largely) unseen women.

It would be churlish to suggest that this film could have been slightly shorter by cutting the opening 20 minutes down to say 15 mins.......but stay with it folks, because there is a symbolic balance (I think it may be dark/light), but the time wasting scenes allow us to take stock of the characters in the police vehicles. Things are not quite what they might seem to be, the accused is shot framed in the drivers mirror like a religious icon( Goya?) Jesus on the cross.....and I think this is a ultimately a significant detail being offered to us early on. In fact the more I think about this film after the event the more I appreciate the care and detail of this masterpiece.

An interesting insight. The film is long because the story unfolds so slowly. Almost in real time! The photography is good and therefore carries one through. And the acting is convincing. But not a lot happens!

"A narrative emerges slowly, in snippets of conversation, glimpses of the barren landscape, snapshots of lives.." this is a good summary from above review.

Not sure why it deserves 94% on Rotten Tomatoes.

Clever superb film You have to know that it is long and slowly paced if you are not good at concentrating. You have to concentrate hard on this film ( especially accounting for the subtitles) but it is a rewarding mesmerising proper grown-up film.

A group of cars are in motion, traversing Turkey's extensive Anatolia steppe of rolling hills and mountains, the landscape an idyllic setting – if not for the morbidity of the situation.

In ‘Once Upon a Time in Anatolia’, what seems to be a tailgate party is in fact the aftermath of a crime. In one of those cars are murderers being accompanied by a prosecutor, a doctor, a gendarmerie, police officers, and diggers – in search of the site where a murdered man had been buried. It’s a caravan but not the kind that you would be happy about.

From the talented Turk film maker Nuri Bilge Ceylan, based on a script he also co-wrote with Ercan Kesal and Ebru Ceylan, ‘Once Upon a Time in Anatolia’ puts a voyeuristic spin on what happens after a murder. In a way, the dead victim is already half-way to justice, having the murder suspect Kenan (Firat Tanis) confess the crime. Kenan has just struck a deal with police Commissar Naci (Yilmaz Erdogan) in exchange for the release of his brother Ramazan (Burhan Yildiz), the second suspect to the homicide.

As Kenan directs everyone to somewhat disastrous results because he can’t remember where he has dumped the body, other characters also ruminate on their desperate and futile attempt to do a search especially when they do it in the dead of the night, only their headlights to guide them. This is where ‘Once Upon a Time in Anatolia’ becomes a dream-like series of sequences, thanks largely to its director of photography, Gokhan Tiryaki. The Anatolia steppe is sprawling and magnificent as is but when lit in a very murky way, it becomes an alluring landscape suitable to the story at hand.

There is no plot to speak of in ‘Once Upon a Time in Anatolia’; it seems it’s going for that purgatorial state of quiet introspection with a few chatter from its characters, often not at all leading to clarity for their situation. The film, at a stretch of two-and-a-half hours, is too long for such long period of silences. But then, it’s beautifully shot.