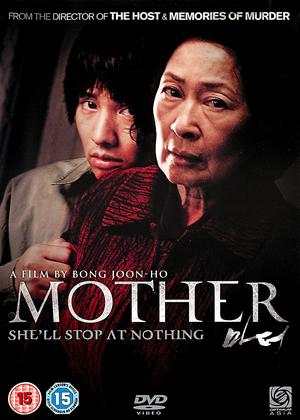 Synopsis:
In a quiet, rural village in South Korea, a lonely, single mother looks after her mentally handicapped son whilst scraping a living as an acupuncturist. But her simple, poverty stricken life is suddenly transformed into a dark web of death and deceit when her young son is arrested for the brutal murder of a local school girl. Convinced that her son has been framed, and faced with a corrupt, complacent police force, she decides to solve the case herself and prove his innocence. It's a quest for justice that leads her into a horrifying world of violence and despair.
But how far is she willing to go to uncover the truth? One of the most original and unconventional detective murder mysteries you'll ever likely to witness. Directed by Joon-Ho Bong, Mother is a darkly comic, suspense-driven masterpiece with a shocking revelation around every twisted corner it turns.
Actors:
Hye-ja Kim, Bin Won, Ku Jin, Je-mun Yun, Mi-seon Jeon, Sae-Byeok Song, Byoung-Soon Kim, Woo-hee Chun, Gin-goo Kim, Moo-yeong Yeo, Young-Suck Lee, Hee-ra Mun, Mi-do Lee, Young-ki Jung, Gyu-pil Go, Pil-Kyeong Jang, Jeong-wuk Kim, Seung-hyeon Lee, Bok-dong Mun
Directors:
Joon-Ho Bong
Writers:
Joon-Ho Bong, Eun-kyo Park
Aka:
Madeo
Studio:
Optimum
Genres:
Drama, Thrillers
Countries:
Korea, Drama, Thrillers

Thrilling stuff from a sensational director - Mother review by JB

A mother's love is a powerful thing and this movie from writer-director Bong Joon-ho, made before his sensational crossover hit Parasite, dramatises this to an extreme and devoted effect.

The mother in question, just known as "Mother" (Kim Hye-ja) lives with her twenty-something son, Yoon Do-joon (Won Bin) in near-poverty in a small South Korean town. Mother and son gain national attention when evidence implicates the son in the murder of a young woman and he is locked up, awaiting the outcome of the process. But he has been falsely accused - he has learning difficulties and the legal system favours the most articulate, and the rich, and his mother decides to step in herself to clear her son's name. She can't afford the supposedly necessary lawyer, who might not be interested anyway, but she has love on her side.

Fans of Parasite will recognise the mixture of shifting tones and attributes here; high drama and tension, mystery, violence, social commentary and off-kilter humour, to name but a few, often all existing side-by-side in a scene. It's a combination that constantly disarms and completely enthralls once you click into it. And that judicious use of an orchestral soundtrack… it's like stepping back into a warped Hitchcock movie, in the best possible way. Like Parasite, there are moments of real cinematic panache and beauty too ("Mother" in those fields… stunning).

This movie is also blessed with an extraordinary performance by Kim Hye-ja as the titular "Mother", who binds it all together. Like the film, her performance is a display of many facets… here, we have rage, anguish, determination, haughtiness, fragility and love. And that dancing at the beginning and end of the movie... Often, her son doesn't seem to understand what she's doing to help him, but that's not why she is doing it.

This is no dry essay on social inequality in South Korea, although that's the message we take away (quite rightly) from Mother. This is a full-blooded and unusual psychological, emotional, thrilling beast of a movie that ranks up there with cinema's most memorable depictions of motherhood of the last twenty five years, from Pedro Almodovar's All About My Mother to Xavier Dolan's Mommy.

Not able to watch more than 10 to 15 minutes of this film.  We did not enjoy it.  We have seen a previous film by this director that wasn't bad, but this film is not very good, although it received good reviews.