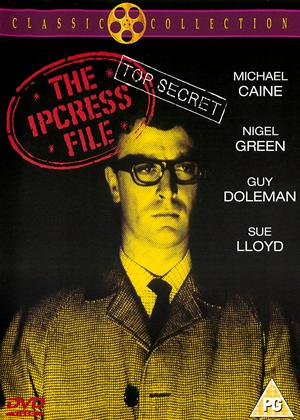 Reviews (3) of The Ipcress File

Harry investigates the brainwashing of British scientists, is captured and brainwashed himself, but escapes - and finds himself out on the streets of London and not in Eastern Europe as he imagined. Now to find the traitor in the department...

All good stuff, quite a few differences from Len Deighton's novel (including the fact that the central character definitely wasn't called 'Harry'), but enjoyable stuff nonetheless.

I enjoyed it, and although it's a little dated it gives a window onto the London of 50 years or so ago. 4/5 stars.

A scientist called Radcliffe is kidnapped from a train. Harry Palmer, a British Army sergeant, now working for an MoD outfit, is summoned by his superior, Colonel Ross, and transferred to an investigation section headed by Major Dalby. H Palmer, played by an excellent Michael Caine, is the most interesting character in the story because he is a relatively complex individual with a troubled past. The other characters, overall, are stereotypical and formulaic in their roles/ acting.

It is a good film, as low-key spy thrillers go, and it is interesting to see London in the 1960s featured extensively in the movie -- a trip down memory lane for older viewers! The story is not entirely plausible, but the suspense keeps you hooked and wanting to know what will happen next. There is still a lack of depth in the plot and the characters, somehow, so that it cannot be a masterpiece or a truly unforgettable classic, in my opinion.

Still, I certainly recommend this film, more particularly if you like spy thrillers, the cinema of the 1960s and Michael Caine. Who doesn't?

An espionage drama about the brainwashing of British scientists pitched rather nearer to the spy-procedural fiction of John le Carre's circus than the sixties consumerism of the cartoonish James Bond franchise. But which has a little of both.

The film has a fascinating look, with the bright colour and expressionist, deep focus camera angles giving the film a pop art sensibility.

The clothes are fantastic, particularly the suits of Harry Palmer, the outsider at the MOD conducting an internal investigation. The remote, numb Michael Caine as Palmer, in his famous glasses, delivers the nerdy cool that he became less deservedly more famous for elsewhere.

But what elevates all else in the Ipcress File is John Barry's haunting, introspective score, which gives the film its soul, its froideur, and a good measure of its style. One of the best London films of the sixties. One of the great espionage films. One of cinema's most brilliant soundtracks.