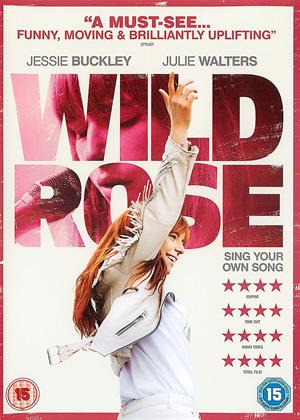 Another good performance from Jessie Buckley in a rather twee plot,but what a remarkably good singer she is too!!!

The soundtrack is made up of song's from and sung by ,some well known singers,but Jessie has singer and writing credits for many of the other song's!.

She surely has another career opportunity as a singer.

If you like country music,this film is a treat for the soundtrack alone.

3 Chords and the Truth - Wild Rose review by BG

If you aren't keen on country music, the film shouldn't be a problem because there isn't too much of it, and the focus is on Rose herself, with a good performance from Jessie Buckley. She does start out as a "Wild" character, quite self centred, but she grows as a person, learns the Truth about herself, and follows her dream while still becoming aware of her responsibilities.

Wasn't for Me - Wild Rose review by SG

I found Rose a difficult character to like and grew tired of watching her selfishly plow through life, only to blame those around her for the misfortunes she created. In all fairness, I turned the movie off half way through so I don't know if there was any character growth. But if there was, it came way too late for me.

There is a huge swell of love for Wild Rose, it is a popular film. So knowing this perhaps when I sat down to watch it I had high expectations. All of us say we do not let others views colour our expectations or even opinions of films but truth be told it is hard not to.

Jessie Buckley is always a good screen presence, she was great in director Tom Harper’s TV adaptation of War and Peace, so far so good.

The story itself is fun and kept my attention, the directing keeps things moving along at a pace and all the characters are big enough and colourful enough to be intriguing but there are few huge stumbling blocks along the road.

Honestly the biggest hill I encountered is if you sell or deal in Class A drugs and you go to prison for it and are released on licence you will not get into the United States of America. There is more than a whiff of wish fulfilment fantasy in the story. An upper-class lady just loves rough at the edges, sweary, women, she just loves her and her kids love country music. I know children that would not watch Dr. Who because Peter Capaldi was ‘old’ so these country music-loving young, modern, children are at best an amazing rarity. The husband was so clearly a pantomime baddy, the character the audience could hate, it was ridiculous. Why do the makers of drama still use this hackneyed and as old as time itself conceit? It is probably just me but I hate it. You end up with a one-dimensional character whose only motive, often disguised skilfully by script, actor or both, is to be be ‘bad’.

It is not all bad. Clearly the writer has tried to add some jeopardy into the proceedings by having Rose-Lynn messing up on her ambitions, finding out Nashville is nothing like she thought but, rather childishly, every problem, every obstacle, in Rose-Lynn’s life/singing ambitions fades away to nothing rather quickly so that she can get a final denouement.

It’s all too neat, all too great in the end for Rose-Lynn.

This is more like an upgraded soap storyline than anything hard-hitting or gritty but the trouble is I think the makers were trying for hard-hitting and gritty.

This is a brilliant film  and I was delighted to see it being nominated in the British Film Awards.  Jessie Buckley has a beautiful voice and her acting was superb.  The story pulled at the heart strings but comedy was abundant as well.  Enjoyed by all my friends as well.

The Scottish accents were so thick that I scarcely understood a word. It might as well have been a foreign language film. Julie Walters seemed to have mastered the accent brilliantly. Boring story about a narcissistic would-be Country music singer who, sadly, couldn't sing. And the songs were sooo boring.

And I don't even like Country - Wild Rose review by HO

Yet, i loved this. Great lead, so talented and so flawed. Great children, great mum holding it all together. Packed full of important issues, dealt with without smultz. REally enjoyed this.