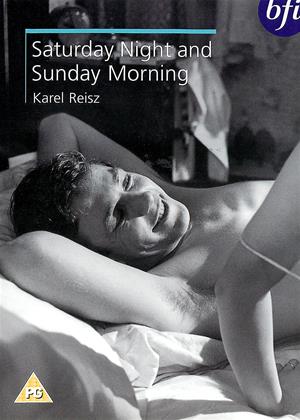 Allan Sillitoe wrote the novel on which the film is based – and also the screenplay for the film - and I suspect much of it is semi-autobiographical. He worked for Raleigh in Nottingham, at one time the largest cycle manufacturer in the world. Those times are gone, Raleigh moved out of Nottingham some years ago (and has now been sold to a Dutch company) and its UK operations reduced to distributing bikes imported from the far East.

Raleigh is where Arthur Seaton worked, machining cycle components from Monday to Friday, and on weekends was unleashed to consume large quantities of beer and chase the ladies. Arthur is angry, loud – and full of himself. He is involved with two women at once, one (Brenda, played by Rachel Roberts) the wife of a colleague at work, the other a young woman (Doreen, played by Shirley Anne Field) who has plans for marriage. Brenda fall pregnant, there are failed attempts at an abortion, Brenda's husband finds out, his soldier friends give Arthur a beating, but life goes on and the film ends with Arthur and Doreen talking about moving into a newly built house. So far, so grim – what do you expect of a 'social realist' film?

Arthur Seaton is not a likeable character: he is drunken, surly, rebellious, immoral and while the acting and the script are excellent it does not have the 'heart' of similar films such as, for example, 'This Sporting Life' made few years later in 1963, also with Rachel Roberts.

Period details abound, from old-fashioned names (you don't find many Arthurs, Brendas or Doreens today), old-fashioned industries, manual lathes on the factory floor rather than CNC automation, old-fashioned pubs, to the wearing of a suit to go out to the pub.

The films of Karel Reisz, Tony Richardson, Lindsay Anderson and others laid the foundation for modern British films that did not hark back to the war and did not depend on the Hollywood idiom. The film is a classic, but it's very much a period piece that provides a window onto a lost world of Midlands industry and life which is now long gone. 4/5 stars - highly recommended.

Firstly, if you hate spoilers, too bad; the previous reviewer told you the entire plot. Anyway. This is one of those "landmark" films which made a big impression all right, but was somewhat overrated because you should never buy the prototype. It's a fascinating window on the very early sixties just before everything changed because the Beatles happened, but to be honest, Albert Finney's "hero", though realistically unlikeable, is basically a smug git who doesn't genuinely seem to learn that much or change significantly as a result of his misdeeds, the consequences of which are, as he says himself, no worse than what he's had before, and nothing he can't shrug off. And why not? I've been beaten up far worse than that (and for much less reason), and it didn't really change anything except that I had to lie down for a while.

At no point was I genuinely interested in this man, nor did I want him to find true happiness because he's difficult to care about that much. Albert Finney's performance is a little odd, and some of the scenes where he provides voiceover narration almost made me laugh, because I kept thinking he was going to go all Four Yorkshiremen and say: "There were 26 of us living in a paper bag in a septic tank..." Alex in "A Clockwork Orange" is a much nastier and therefore much more interesting person learning similar lessons in a much more dramatic way. And "Get Carter" (the original version, obviously) shows us a very similar slice of working-class life a decade later, but is far more compelling. The minor characters in that film mostly don't go any further than the supporting cast in this one, but there are many scenes where it has a similar vibe but is more vibrant, if you catch my drift.

I don't give a damn about the living conditions of real working-class people in the Midlands before I was born, any more than I agonize over the Napoleonic Wars, but I'm willing to be drawn into any narrative which involves me because it's well written. This movie is very strangely written indeed, and although I haven't read it (and I don't intend to), the source novel presumably must be too. Minor or downright marginal characters kept getting my attention more than the central protagonist, but everything that happens revolves around him to an excessive degree, so most of them either fade into the background or behave in unrealistic ways. A particularly weird example of this is the black man who is established at the very start to be our hero's friend, an early example of taking the curse off a not very nice main character by lazily telling us that if he isn't a racist he must be basically good, no matter how badly he treats everyone else. The black guy, having appeared in the movie for precisely long enough to establish that he exists and serves as a very specific plot point, vanishes and is never mentioned again.

Which neatly sums up this film's flaws. It's interesting in a curiously perverse way, because I kept wishing it was about just about anyone in it except the person it's actually about. But if this is an autobiography, I can't help feeling that the author must left out an awful lot that made him look like an even worse person than he does in this whitewashed version. By the way, check out the number of people in the crew, including director Freddie Francis, who ended up making horror movies for Hammer. It's probably irrelevant, but hey, it's a thing!