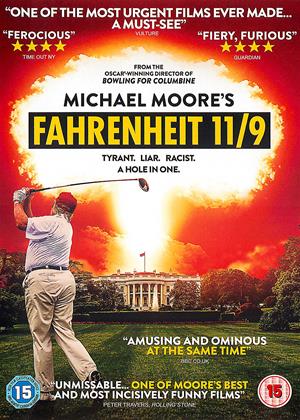 A bit scattershot but at least someone is getting the message out . - Fahrenheit 11/9 review by RC

Michael Moore was one of very few commentators who suggested that Trump was in with a serious shot of being President. He said he knew working class voters and how they think and he knew that what Trump was saying resonated with them. None of this stops him asking at the beginning of this film : “How the f*** did we get here?” Whilst all of Moore’s films are well worth watching they are usually more focused and precise than “Fahrenheit 11/9”. In a somewhat scattershot approach he focuses on numerous targets some of which seem to have tenuous links to the President, though I suspect his overall point is that the political class and system have continually let people down and allowed a person like Trump to swagger into the void.

Subsequently he highlights a staggering case of political corruption and negligence in Flint Michigan , where the water supply was switched from Lake Huron to the local river, which turned out to be heavily polluted with lead. Yet when this was discovered city officials investigating were told to cover up the incriminating findings with the water eventually being re-sourced back the lake , but only for the areas Automobile industries, where the parts where being corroded by the toxic water. Astonishingly we are then shown Barack Obama visiting the city and drinking from a glass of water in a showcase of solidarity with the leaders of the city. Then we are shown military exercises carried out at night in the middle of the city in front of terrified residents , again this happened under the Presidency of Obama, and I guess what Moore is showing here is the disconnect and contempt ordinary voters are held in .

Equally astonishingly we see the Democratic Party ignore the votes for left wing candidate Bernie Sanders in favour of Hilary Clinton , the preferred establishment ticket, and of course this was one of the main attack points Trump utilised against Clinton- that he operated outside of the established political systems- a maverick , an auteur. Nonsense of course , but against Clinton he could make it work.

There is more material , clumsily comparing the rise of Trump to the rise of the Third Reich through a doctored video of Trump speaking over footage of a Nazi rally and some genuinely creepy footage of Trump admiring his daughter Ivanka,s figure and leering over her .

As ever Moore offers hope and optimism, covering mass strikes by teachers that won the pay and concessions they were after but also stating out on strike to earn parity for other workers and most hopefully the kids who spoke out so eloquently after the mass shooting in Parkland and who engineered mass protests , with such success that it makes you wish they had run the Democratic campaign against Trump.

Not so much a diatribe against Trump in the White House ( that could come later, and there are worrying hints he is after breaking the two term cycle for Presidents) more a head shaking examination of how he got there in the first place Fahrenheit 11/9 is bit messy in its editorial approach and is occasionally embarrassingly clumsy. But as ever with Michael Moore you have to forgive this heavy handed sermonising and just thank, whoever it is you thank , that someone is sending out the message.

Lots of very worrying images and allegations, some supported by evidence. But despite the interest, structurally rather messy: and nowhere really addresses its supposed themes. But nonetheless absorbing and full of noteworthy stories.

As others have said, this film does have its flaws. But the world needs a Michael Moore, there can be no doubt of that.

P.S. Why does the critic review contain so many misspellings? There is no such word as 'baffonish'. And the town in question is 'Flint', not 'Flynt'.

During the 2016 presidential election, Michael Moore continued to spout in a gloomy doomsday manner that Donald Trump may very well be the next president of the United States. Few believed him, from politicians to celebrities to various polls, all believing that Trump had shot himself so far in the foot a victory was impossible. And yet it happened, leading to Moore crafting his latest documentary that begins with an obvious question of the naysayers; “How the f**k did this happen?”

But Moore’s film isn’t just about the corrupt nature of Trump’s win and the damage he has done in his first two years in office. There are certainly a plethora of documentaries on this subject. His film aims to not only take on Trump’s manner of policy and speaking but also the entire system in a rather scattershot method that borders on babble for jumping through so many topics. He takes aim at how Hillary Clinton was perceived by the media, using plenty of graphics to let you know the multiple interviewers who grilled her were later found to be guilty of sexually harassing women. Later, he’ll draw attention to Trump’s very creepy manner of talking about his daughter over the years, constantly talking about her body and how he would’ve dated her, stating that his smash-cut shouldn’t gross you out since it has been public for so long. And then he goes for the lowest hanging fruit of placing Trump’s audio and his actions over footage of Hitler and Nazi Germany. The shoe fits but, wow, does Moore like to stomp incredibly loud with this familiar tactic.

Another area Moore gets lost within while trying to tie back in with Trump is a more personal subject of the decaying nature of Michigan. He shines a harsh spotlight on how water for Flynt was diverted to the toxic river that ended up poisoning the community with lead, in what Moore describes as a slow-motion extermination. The corrupt and bought governor decided to switch water flow back to the great lakes but only for the automobile factory, as the toxic water damages the parts. If this doesn’t make it clear that the politicians of Michigan care more about profits than people, perhaps the uninformed military practice drills of helicopters and gunfire will convince you.

For the few still allegiant to Trump that believes my favor of his failure is political bias, consider how Moore goes after everyone in this scenario. He speaks with Bernie Sanders about how the Democratic party shut him out to favor what they believed was the strong candidate of Hillary Clinton. The laziness of Clinton’s campaign is called out for not being more prolific and resting too easy on Trump’s bafoonish nature to carry her to the polls. Even former President Obama becomes a useless tool for change when he visits Flynt and stuns a crowd with how casually he addresses the people dying of lead poisoning and having a government that has failed them.

Much like Moore’s previous film, Capitalism: A Love Story, the documenter presents us with a nihilism for his film, that even knowing all this won’t mean anything. It’s in this rant that Moore becomes lost, verging on becoming one of the crazies on the street that runs through several dozen topics in the course of a few minutes. And so he tries a familiar tactic of Trump; he cuts off his climax statement with that missile attack warning in Hawaii that proved to be fake. Though only a drill, the fear was there on everyone’s faces as they scrambled for proper shelter. Moore wonders if we’ll ever be that mindful of the current problems of Flynt’s polluted water, the gun violence that continues to run rampant, the unethical actions of immigration enforcement, and corruption of greed within the flawed political system. Or will we only notice its damage when it’s right in our faces with the world ending? I recall a radio personality months ago making a case for Trump, that we should wait until he fires off a nuke to blame him for anything. This the reality of how passive the world has become, where only the deepest fears speak the loudest and divide us further.