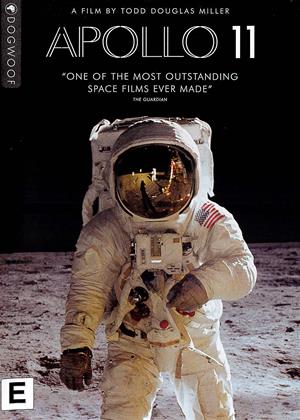 As someone with an interest in space and spaceflight in general I thought that over the years I'd seen pretty much all the footage publicly available as far as the Apollo 11 mission was concerned so while I was looking forward to watching this documentary, I wasn’t particularly expecting to see anything new. How wrong I was, I would guess, that at least 70% or more of the footage used was new to me so I suspect it may be new to you as well. So, thumbs up for that.

It also benefits significantly from , firstly, not having a contemporary voice over telling you what you are looking at , instead there are just the recordings made at the time so the story is allowed to unfold in its own way and secondly by the clever use of very simple on-screen graphics to reveal telemetry changes. I thought that worked really well.

All in all, a great watch, I'd recommend it to anyone.

Involving recreation of the original event - Apollo 11 review by GC

I am surprised by how involving this film is. Tense at times and thrilling, I was so impressed by the achievement of going to the moon, landing on the surface, walking about there and returning with the quite basic space technology of the times. Heroic, brave and daring, it shows the USA at its best.

Several other people watched it and agreed with me.

I'm afraid I was bit surprised at all the very positive reviews of this in the press. For it’s a special sort of achievement to take a collection of footage of the Apollo 11 mission and make it rather dull. For that, unfortunately, is what director Todd Douglas Miller has (for the most part) done here. Despite the attempt to focus on the heroic actions and extraordinary experiences of the three astronauts, and to display the vast concerted effort on the ground that their flight required, Miller manages only to provide a sketchy overview of the historic event, only intermittently and fleetingly illuminated by a telling or surprising detail.

The concept of a film composed entirely of found or pre-existing material is a radical one. It asserts that the material deserves to be treated as something special and invites an artistic approach that’s similarly distinctive. Fine in principle, but the composition and the editing, by contrast, have no identity, no form that reflects the discovery of the material, the sheer wonder of its very existence. Rather, the film sketches the story of the mission in haste, hitting dramatic high notes and scooting onward, and formulates the episodes of the mission superficially, in familiar chronological manner, as if working from a wikipedia entry .Throughout the film, the voice-over of Walter Cronkite, taken from news reports at the time, describes in grave tones the succession of events as they unfold onscreen; and the effect is to simply retransmit the long-sedimented version of the mission rather than redefining it on the basis to what the filmmaker experienced in the newly found footage itself. If you’re old enough, imagine the History of the FA Cup as narrated by David Coleman.

That sense of personal experience is what’s missing. (Peculiarly, the graphics, which provide intermittent breakdowns of particular stages of the mission, often have a greater sense of immediacy and drama.) Miller’s guiding principle appears to be shoehorning as much and as varied an array of footage as possible into the film's brief span and to edit it into a smooth unity. He hardly works closely with the images themselves, whilst the musical score, which is part action film banality and part lift musak, has the effect of cushioning the images to fit them into the standard audiovisual aural-wallpaper of Hollywood and television.

But the figures who suffer most from Miller’s approach are the astronauts themselves. You get a sense akin to those awful royal documentaries, that straightjacketed official portraiture; we remain remote from the astronauts’ characters, their own sense of experience. The one time the film does try to get close is a woefully misjudged montage, patched into a sequence of the astronauts suiting up that shows a brief flurry of their personal still photographs, depicting in flashes the Kodak moments of their earlier years, as if suggesting that, at the moment, those memories passed through their minds. The concept is both banal and superficial.

Some of the film’s most striking footage shows the hundreds of people who worked in Mission Control: rows and rows of scientists at long tables, each staring at monitors, banks of buttons & switches, some taking notes on paper. These images recur, and one in particular, a long tracking shot revealing vastly many rows of technicians, tightly arrayed in long lines, is awe-inspiring—but, inevitably, the speculative wonder that it inspires is instantly thwarted, because Miller never conveys the slightest sense of what any one of them is doing, so they become mere extras in the drama (take a look at James Burke's old 1979 documentary to see how it could be done).

The new footage is amazing, with plenty of fascinating incidental details, but the film's style, borrowed from conventional, documentaries, merely turns the whole thing into something bordering on the soulless. For enthusiasts like me, therefore, this felt like a missed opportunity.

Been told a few times but without this clarity and quality of the film, well worth a watch for anyone interested in the subject.