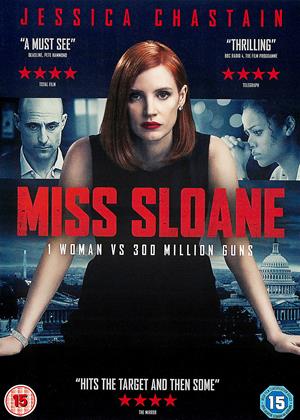 For once the script writers managed to do their job! Plenty of sharp dialogue, such a refreshing change from Hollywood's usual brain dead efforts. Not always wholly convincing and needs a degree of concentration, but worth the effort.

You’d think a message movie about a Washington lobbyist would be just about as riveting as the slew of films about the financial crisis or baseball. You’d be right. The screenplay is nowhere near as clever as it thinks it is and Jennifer Chastain’s central performance not nearly arresting enough to carry the picture. Her flippant, know-all lobbyist soon starts to grate. To show anger, she even resorts to that clichéd action of clearing her desk with a sweep of her arm.

We know the story will end in court because it’s all told in flashback. This is often a sign of a film that lacks confidence in its ability to hold audience attention. It’s a joyless, cold-hearted movie that has no surprises until the last few minutes. John Madden directs competently but without flair.

Jessica Chastain seemed to enjoy playing her character, and played her well. But the basic premise didn't quite hold up to the end.

Jessica Chastain plays Elizabeth Madeline Sloane, a lobbyist who will go to any lengths to win. Miss Sloane jumps ship to lobby for a rival company who are anti existing gun laws, leaving a bitter taste with her old firm who wanted her for the pro gun campaign. Thus, they are determined to win and break Miss Sloane in the process.

Miss Sloane is an utterly ruthless professional, putting everything in second place to her succeeding in her career.

Miss Sloane has no empathy for people who think they are her friends and there is no moral line she will not cross if the goal is on the other side. She drops illegal uppers like smarties to stay awake for her work. Incapable of love and openness, she meets her womanly needs with male escorts. There is a hint to her difficult childhood where she briefly refers to her escort of having to lie through necessity as she grew up, that being the only clue to her ruthlessness.

Not Sorkin, but still worth your time - Miss Sloane review by Champ

To criticise the script as not being quite as good as Aaron Sorkin's work is perhaps unfair - little is, after all. But it tries hard, and is full of smart people with smart dialogue trying to show they're the smartest person in the room. I understand that this isn't everyone's cup of tea, but it's definitely mine. If you like the West Wing, you'll like this.

It does require some commitment, however - the first 30 minutes especially require all your attention to keep up, but your focus is rewarded as the story unfolds.

Everyone has commented on how Chastain carries the film, and she does - an absolutely riveting performance.

Interesting subject and some excellent performances, stick with it. - Miss Sloane review by BB

Only negative in my mind is that it is about 20 mins or so too long, some of the storyline lags a little. But a few twists and turns in the film keep it interesting and there are some great performances. Particularly the lead who delivers a convincing character who is driven but you are never quite sure what she is prepared to do to achieve a result in her favour.

So worth watching if you like films you can get involved in.

And of course a very topical subject - Gun control and the influence of lobbyists and organisations like the NRA!

A good, solidly plotted film with a great twist at the end.....what takes it from a 4 to a 5 star rating though is the performance of Chastain in the lead role-stunning! Worthy of an Oscar in my opinion....an all round enjoyable film.

Clever, brilliant, cold, efficient like money. Miss Sloane must have the same features as her enemy to be able to fight them. There should be more films showing the stupidity and the nastiness of legal guns in a nation. I wonder how the film was received in the US and if it was distributed widely. The male escort is one of the most interesting characters despite his brief role.

Sharp as a knife - Miss Sloane review by HM

A film about the gun lobby tackling a bill to Capitol Hill that will be against their interests? Yes. A film about political manoeuvres in the dark? Yes. However, it is mostly about the ruthless character of our heroine, firstly a character of substance and a power for good, but the film analysis the mentality of this character which is the most interesting part by far. She isn't all she seems as you get to know more about her.

Much recommended for viewers who like intelligent movies. No guns or explosions; just psychological ones.

one to watch - Miss Sloane review by cm

Gun violence is the issue in Miss Sloane, but not the issue of the script. Similar to the storytelling of House of Cards, this is a picture that’s more about the deceptive tactics of lobbyists that battle against each other to make sure a bill goes through or dies on the floor. The most powerful player in this arena is the titular character, willing to do whatever it takes to win. She’s a nasty woman, implied by the accompanying hashtag for the social media campaign, but perhaps not nasty enough to sell the disgusting world of lobbying politics.

Jessica Chastain plays Miss Sloane with enough power for this role and then some, even around the likes of Mark Strong and John Lithgow. As the top dog lobbyist, she snarks at any co-worker not giving 110% and barks at anyone standing in her way. With her dark dresses, high-heels and loud lipstick, it’s hard to take your eyes off her as well. She’s so confident in her abilities that when the firm she works for wants to pursue the gun lobby to shut down a gun taxation bill, she can both laugh and leave the firm for another group. Taking a handful of her followers with her, she sets about on her new campaign to shut down to tout a gun bill by roping as many congressmen as she can into her fold by any means necessary. Hiring actors, staging events and agreeing to secret surveillance are not considered immoral in her book, even if they’re considered illegal in other books.

Sloane is a nasty woman, but the movie feels the need to pull her back from the inky abyss, almost as if it’s afraid we’ll hate this character. She has problems with insomnia that she not only refuses to fix, but placates with pep pills to continue working into the late night hours. Her additional addiction includes male hookers, hoping to feel a little something in her soul after hours. I don’t blame her for this vice considering Sloane doesn’t have much any life outside of work. The most we get to see of her when not concocting political strategies or verbally assaulting her way to the top is eating Chinese food and reading a John Grisham novel. I’m not entirely convinced she enjoys Grisham novels either since she’s later seen reading a medical book which was only so she could find another actor for her schemes.

I wanted Sloane to be much more cutthroat considering how many twists she can pull out of her behind when it is oh-so-convenient. I especially wanted her to be more evil when the movie makes itself clear that she has no personal gain in this fight. Several people ask if she has a history with gun violence, but she declines to answer and the subject is never brought up again. She weeps for losing those around her by deceiving her more friendly co-workers for political means, but, again, this all appears to be part of her plan. How much of her “pain” is real and how much of it is staged to trap her opponents? Nobody knows until she displays her hand in one of the most left-field twists of a finale.

There’s lots of political drama in several scenes with conspiring forces, but scenes such as Sloane and a male hooker getting it on are treated more as a romantic comedy. Much like Sloane herself, this is a movie that never decides to settle on one tone. A bit of a shame when you consider that Sloane is stronger when she’s smugly toasting a victory martini for fooling her opposition than tearfully pleading to feel something. Why is the movie so afraid to make Sloane the ultimate lobbying villain? It’s a role she fits more perfectly into than a woman who can’t decide if she’s breaking down or pretending she’s breaking down. Be nastier, woman!