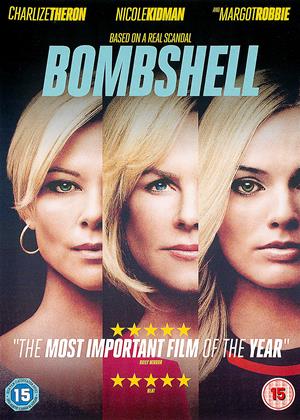 So 1 star may be a bit harsh but this film felt much like a wikipedia summary of what happened to many of the female employees of fox news. Everything is over stylised and while the acting good it's still not a patch on the loudest voice which gives more detail and insight into the abuse of power for not just the women but also those who dared to challenge.

If u want just a quick summary then this film is more likely a 3 out of 5 but if you have watched the loudest voice and then watched this (as I did) you will have learnt nothing new and you will gain no insight into both a heavily flawed but ambitious cutthroat man in charge or the ambitious women who were exploited along the way.

This is one of those exposé dramas similar to Spotlight and The Big Short (both 2015) in this case the sexual harassment culture at America's hugely popular, right wing TV channel Fox News. It's a powerful and shocking story and backed by fantastic performances. The Murdoch owned channel (Murdoch here played by Malcolm McDowell) is rocked when long standing presenter Gretchen Carlson (Nicole Kidman) is sacked from her show by the channels seedy, repulsive but all powerful boss, Roger Ailes (John Lithgow). She begins a lawsuit against Ailes personally alleging long standing sexual harassment and reveals the open secret of his habitual attitudes to women forcing them into sexual acts on threat of dismissal. Gretchen hopes her actions will bring out other victims but fear for their careers plays a big role in forcing them into silence. Top news anchor Megyn Kelly (Charlize Theron) knows Ailes is guilty but wrestles with what to do. She famously attempted to expose Donald Trump for his attitudes to women and knows she needs to support Gretchen. There's some disturbing scenes including where Ailes harasses and assaults young employee Kayla (Margot Robbie). This character is fictitious created as a composite to represent the typical victim of Ailes. Lithgow in heavy makeup brilliantly plays the loathsome Ailes in this thoroughly well told, uncomfortable and superbly done film. An excellent drama with topnotch performances and a film well worth checking out.

The misuse of power - Bombshell review by AB

This is the true story of an ingrained culture of sexual harassment and abuse at Fox News. The chief abuser is the head of the organisation Roger Ailes, played with ruthless misogyny by John Lithgow. He uses threats, fear and promises of advancement to get his way. Three of the many women harassed by Ailes are played brilliantly by Charlize Theron, Nicole Kidman and Margot Robbie.

It takes one brave woman to take on Ailes, then many other women begin to come forward. This film is a powerful depiction of corporate silence about routine sexual harassment, superbly acted. Strongly recommended.

Jay Roach’s Bombshell aims to throw us into the media blizzard that was the Roger Ailes Fox News scandal of 2016. It starts with a primer as Charlize Theron in the role of Megyn Kelly gives us a fast primer of the environment we’re being thrust into. We get a quick outline of the Fox News offices, the structure, the hierarchy, the marching orders, and the fashion requirements. You won’t have to know all of this to fully grasp the controversy at play but you will have to keep up just as fast for a film that crams as much of this world into under two hours.

Throughout the picture, we follow three different women over the course of their rocky careers at Fox News during the 2016 election. Gretchen Carlson (Nicole Kidman) has been booted off her morning gig and given her own show on the news network but she’s nobody’s fool. She knows this was a power play to kick her down into the ratings graveyard of weekday afternoons, far from the bigger talents of Sean Hannity and Bill O’Reilly in the evenings. Elsewhere in the building, Megyn Kelly is struggling with deciding what phase she should proceed with next in her career, making the call of whether or not sue the CEO Roger Ailes (John Lithgow) for sexual harassment or keep quiet for the sake of her kids. With just as much to lose is Kayla Pospisil (Margot Robbie), a plucky intern who upholds the Fox News beliefs but soon realizes there’s a darker side to the network.

Roach’s film attempts to be a bit more all-encompassing to show how sexual harassment can prevail in a work environment where it is never questioned. It seems as though most people about Ailes and his sexual advances on female co-workers. His office is loaded with televisions build so he can constantly demand more leg and shorter dresses on all his female anchors, as well as a private elevator for discreet partner visits. The one who experiences the harassment most presently in Kayla, finding her way into his office and instructed to lift her skirt for his approval in anchor material. If that weren’t horrifying enough, Kayla will soon become bedfellows with her co-worker (Kate McKinnon) and learn how tough it is to work at Fox when you can’t admit to being gay. If she speaks up, she’ll be fired. Everyone could be fired, leading to Kelly’s crew being hesitant to say anything. Not only would they lose their jobs but be smeared by the network up and down. When Carlson goes ahead with a sexual harassment claim, the office is instructed to wear Team Roger shirts, a prospect that creeps out many and leads to McKinnon muttering “these are the end times.”

There’s perhaps too much ground covered in this film that a lot of the more personal aspects become a bit muddled and lost in the game of trying to cram as many players into the picture. Some of the notable supporting roles include Rupert Murdoch, Murdoch’s brothers, Roger’s wife, Roger’s wife lawyer, Rudi Guiliani, Sean Hannity, Bill O’Reilly, Neil Cavuto, Chris Wallace, Geraldo Rivera, and many more. And you better know who most of these guys are as they pertain to these events because there won’t be much explanation to their inclusion mere a slightly intriguing aside. For example, there’s a scene where Hannity, Cavuto, and Rivera all talk about the rumor of a bet going around Fox during a scandal. It’s a one-minute scene that never goes further than that. Even Chris Wallace is only present for a meeting where it seems all he does is make eye contact with Kelly.

Though we spend a lot of time with the victimized women and the bitter Ailes, little of it resonates with the weight that one should be feeling. As a result, much of the plight seems somewhat lost as the film bounces around in time and tries to hit as many bases as it can to make the point about how women are stronger in numbers, even against a media giant armed with Slander. There’s certainly a correlation to be had with how Kelly was targeted by Donald Trump in his fury of ugly Tweets leading into the 2016 election, realizing she couldn’t stay silent if she wanted the vulgarity and slander to stop. That being said, the performances are exceptionally strong and the tense atmosphere of such a hostile work environment never ceases, creating a cathartic experience where there’s a bittersweet edge to Kelly shouting that 2016 has been a horrible year and she’s allowed to be pissed off about it.