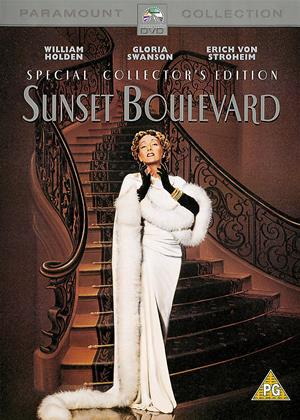 I was expecting big things from this picture and it delivered! I instantly loved the direct opening, very film noir. There are some killer scenes, most of which contain Glora Swanson, who commanded every scene she watched, she was incredibly believable and a quote that sums her character up is ‘I am big. It’s the pictures that got small.’ Her character was very complex; I went from despising her to pitying her. The lighting was beautiful and played a key role in making Norma Desmond’s (Glora Swanson) mansion a character in itself. This film is a classic to be watched by film lovers of all ages, I want to watch it again now!

Wilder coldly picks away at the soul of Hollywood in this dark meditation on the film business: half horror, half thriller. It is a typically cynical Wilder work, famously narrated by a dead man, Joe Gillis (William Holden ) a struggling screenwriter floating in the pool of forgotten silent film star Norma Desmond (Gloria Swanson) face down with a bullet in his back.

The mansion Norma shares with her former director and husband, now servant, Max (Erich von Stroheim) is a fascinating place; part Gillis' morbid dream, part mausoleum. Gillis, a failing screenwriter is chased there by debt collectors, a stage in his downward spiral. It is a kind of Hollywood purgatory, a development hell made real. Gillis tries to finagle a deal with death, but he is doomed. As he says, he is a ghost writer.

There are fabulous imaginative gothic touches from Wilder and co-auther Charles Brackett, such as the funeral of the dead chimp, or the wind that blows low eerie echoes through an old cinema organ. It was so apt to choose the location of the film as its title.

Holder is excellent as the hubristic but cursed writer, but Gloria Swanson is something more; she is truly strange. Norma entraps Joe in his journey through moral emptiness and desire to succeed at any cost. He has no interest in his writing other than to make a sale. The film is full of delicious insights into the film business and its history. The interiors are classically noir, but it's Wilder's pessimism about human nature that most makes this wonderful film a great of the genre.

Excellent film, fabulous acting, (Gloria Swanson, wow!) and a wonderful story. Well worth watching and lovers of old motor cars will see a few beauties too!