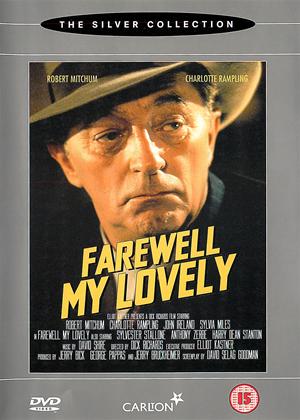 Synopsis:
The neon-drenched, smoke-filled LA of 1941 forms the background for this acclaimed adaptation of Raymond Chandler's novel. Philips Marlowe (Robert Mitchum) has two cases on his books - and they may not be as unconnected as they seem. Giant-sized Moose Malloy is straight out of jail and looking for Velma, his chorus-line girlfriend. Marlowe takes sympathy on him and agrees to track her down but all he finds is a dead-end. Meanwhile, smooth gigolo Lindsay Marriott is eager to buy back a rare jade necklace from thieves and hires Marlowe as protection during the transaction. Before he knows it, Marlowe finds himself surrounded by murder, intrigue and a secret but deadly connection...
Actors:
Robert Mitchum, Charlotte Rampling, John Ireland, Sylvia Miles, Anthony Zerbe, Harry Dean Stanton, Jack O'Halloran, Joe Spinell, Sylvester Stallone, Kate Murtagh, John O'Leary, Walter McGinn, Burton Gilliam, Jim Thompson, Jimmy Archer
Directors:
Dick Richards
Writers:
David Zelag Goodman, Raymond Chandler
Studio:
Carlton Video
Genres:
Drama, Thrillers

Reviews (3) of Farewell My Lovely

Although Humphrey Bogart is by far the best-known actor to have played archetypal private eye Philip Marlow on the big screen, Robert Mitchum is the only one to have played him twice. Watching him here, you can see why he got a second crack at the rôle, because he's just about perfect. The only slightly jarring note is that he's almost twice as old as the character is in the book, but that's dealt with in the very first scene by a voiceover monologue explaining that this version of Marlowe is getting old, so we aren't expected to believe Robert Mitchum is in his early thirties. Since Marlowe is a world-weary character whose hard-boiled cynicism conceals the softest of hearts, making him older than usual works very well.

You can easily see how he got that way. The mean streets Marlowe inhabits are very mean indeed. The almost all-pervasive colour scheme of the movie is the dirty yellow of old newspapers and bad teeth, and nearly everybody lives in claustrophobic squalor which doesn't end when they go out onto the cramped, grubby streets. Almost every room opulent and spacious enough to be a potentially pleasant environment is filled with crooked people doing things which are at best sleazy. And the one family rich enough to live in a luxurious home that isn't a casino or a brothel have plenty of grubby, sordid secrets lurking just below their veneer of respectability.

Yet there's a surprising element of warmth and humanity which isn't present in the book. This older, wiser Marlowe, when forced to spend time with a hopeless alcoholic in her fifties who hasn't done any housework in years, is obviously sorry for her rather than simply disgusted because she's old and drunk and dirty.

This isn't the only way in which the book has been revised. Several major characters who got involved in the action in extremely contrived ways but turned out to be utterly irrelevant have been either omitted altogether, or rewritten to make them a meaningful part of the story, which in one case results in a change of both profession and sex. But these rewrites improve what was originally (and to some extent still is) a chaotic muddle of a plot which reads as though Raymond Chandler randomly thought up events and characters that appealed to him and then tried to make them all fit together somehow.

However, the basic storyline, in which Moose Malloy, an ex-con as strong as he is stupid, memorably played here by wrestler Jack O'Halloran, who succeeds in making Robert Mitchum, who is not a small man, look puny compared to him, won't quit looking for the girl he loves despite overwhelming evidence that she isn't the slightest bit interested in being found, especially by Moose, is very faithful to the book. And although she isn't really in the film all that much, Charlotte Rampling is as fatale a femme fatale as you'll ever see!

This is not a thriller in the modern sense, with massive slo-mo gunfights and immensely long chases in elaborate environments that will form the basis of the spin-off computer game, it's just a screen version of a Raymond Chandler novel published in 1940. But as Chandler adaptations go, they don't come much better than this.

Perfectly noir - Farewell My Lovely review by AS

Forget the ramshackle plot, just listen to the laconic one-liners, the crystal-edged dialogue. Mitchum is the perfect Marlowe, the only Marlowe, the Marlowe as written by Chandler. And Charlotte Rampling is the doll to die for. Brilliant.

This is a rather good adaptation of the classic 1940 Raymond Chandler novel featuring tough, hard drinking private eye Philip Marlowe. The Marlowe character has been played by many actors over the years including Humphrey Bogart - here he's played by Robert Mitchum, who a little to my surprise makes rather a good job of it.

Marlowe is hired by Moose Malloy ('built like a beer truck') to find his lovely girlfriend Velma Valento who has disappeared while he's been in jail. Marlowe follows a cold trail and unearths many connections between assorted dodgy characters. The 1940s settings give a believable film noir feel to the whole production, Robert Mitchum makes a good job of the lead character, the rather lovely British actress Charlotte Rampling appears as the femme fatale, and the then little known Sylvester Stallone has a bit part.

I enjoyed it - but I suspect it's a little on the slow side for modern audiences looking for more crash-bang-wallop. 3/5 stars.