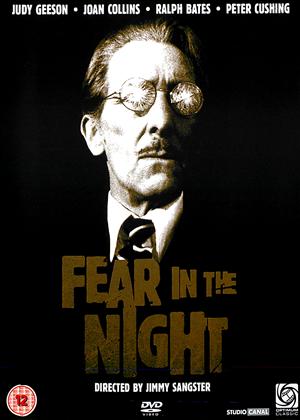 Synopsis:
Peggy (Judy Geeson) is recovering from a nervous breakdown when she is attacked by an unseen assailant. As she struggles to break free, her attacker's artificial arm comes loose and Peggy blacks out in sheer terror. Peggy and her new husband Robert (Ralph Bates) spend their honeymoon at the country school where Robert is a teacher. The school is eerily deserted. Except for the headmaster Michael (Peter Cushing) and his wife Molly (Joan Collins). Returning to her cottage. Peggy is once more attacked by a man with one arm. Robert goes to London on behalf of the headmaster, but leaves his shotgun behind to reassure Peggy.
Michael visits Peggy at the cottage late one night, and she notices for the first time that he only has one arm. Terrified, she reaches for the gun.
Actors:
Judy Geeson, Joan Collins, Ralph Bates, Peter Cushing, James Cossins, Gillian Lind, Brian Grellis, John Bown
Directors:
Jimmy Sangster
Producers:
Jimmy Sangster
Writers:
Jimmy Sangster, Michael Syson
Aka:
Dynasty of Fear
Studio:
Optimum
Genres:
British Films, Classics, Horror, Thrillers
Countries:
UK

Reviews (1) of Fear in the Night

Spoilers follow ... - Fear in the Night review by NP

The camera prowls around the open fields, huge assembly rooms and rolling sports grounds to the sound of children singing, nicely and sedately setting the scene for this 1972 Hammer horror. Naturally, the camera comes to rest on the feet of a man hanging from a tree. It takes 94 minutes for us to find out who they belong to …

Sally Geeson plays the rather delicate woman in peril attacked in the first few minutes by a man with a prosthetic arm! When she meets the very friendly Headmaster of the school where her boyfriend Robert (Ralph Bates) is due to begin work, the fact that he has only one usable arm doesn’t appear to bother her unduly, at least not initially.

To say Cushing is excellent is rather like pointing out the sky is blue. His subtle wistful looks and occasionally rather breathy intonation when in close proximity to Peggy seem to betray the rather obvious fact that Headmaster Carmichael is behind the attacks on the unfortunate young lady. A testament to his performance here is that you remember him appearing far more than he actually does. The question is, is Peggy imagining it (she recently suffered a breakdown), or is Robert in cahoots with Carmichael?

A pre-Hollywood Joan Collins turns up as Molly the waspy wife of the headmaster (“She can be a terrible bitch!”). Curiously she considers Peggy almost a child bride to Robert – curious given the vast age gap between Molly and her husband.

The revelations, when they come, are very good. Peggy, a victim throughout, really has our sympathy as the bizarre double-twists are expertly delivered. The recording equipment where the deranged Carmichael broadcasts his private showcases are used to good effect in the finale, handsomely obscuring the fact that the scenes are simply filled with the Headmaster explaining the plot. Unspectacular, but enjoyably told and extremely well played by an excellent cast.