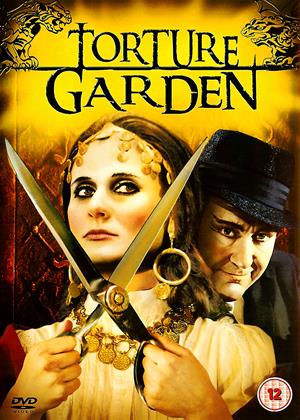 This is yet another of those portmanteau horror movies that Amicus, Hammer's most successful rivals, specialized in. The all have exactly the same structure: four or five people find themselves in some slightly creepy place, in this film a tacky carnival sideshow, and a strange man gives each of them a vision of some extremely improbable and almost invariably fatal event which turns out to be either their predestined fate, or something which has already happened because they've died and gone to Hell. Or something very much along those lines. "Torture Garden" is one of the most obscure of these films. Unfortunately, that's because it isn't very good.

The 12 certificate should warn you that if you're expecting horror, you'll get extremely little of it indeed. In fact, at no point are we given more than the briefest of glimpses of anything nasty, nothing truly scary happens, and the whole thing barely qualifies as a horror movie at all. The cast is also rather disappointing. Most of these films take advantage of their episodic nature to have numerous surprisingly famous guest stars, since if they only appeared in one 20-minute segment, they didn't need to be hired for very long, but although we do get Peter Cushing, who was almost a permanent fixture in these things, and Jack Palance is delightfully cast against type as an over-excited and rather camp academic with a passion for Poe, most of the others are decidedly B-list at best, and some of the acting, especially that of the women, is atrocious. And Burgess Meredith, in the rôle usually given to Peter Cushing of the sinister man in the linking segments who reveals the ghastly fates of everybody else, is literally a pantomime villain; I kept expecting the Adam West version of Batman to rush in and punch him.

I was about to say that it's probably a bad idea for directors of horror films to attempt to persuade the audience that possessed pianos are a credible threat, but this movie and the completely bonkers Japanese horror-comedy-surrealism extravaganza "Hausu" were made in the same year, and they both feature homicidal pianos as well as possessed pussycats, so I guess that in 1967, everybody was smoking the same stuff as the Beatles. However, "Hausu" uses these ridiculous concepts infinitely more imaginatively. "Torture Garden" passes the time adequately, but it's definitely not a classic of its kind. And I sometimes had the feeling that I was watching a horror movie aimed at children. Robert Bloch, better known for "Psycho", allegedly wrote the script, but you could have fooled me.

I LOVED this movie. One reason is that after watching the new film GHOST STORIES which is a homage to those old Portmanteau films by Hammer or others, usually from the 1960s and 70s, although THE film that began it all was DEAD OF NIGHT from 1945 which was remade in the 1970s with Tony Hopkins in the ventriloquist dummy story (Michael Redgrave was in the original version and the black and white camera-work and direction is Oscar-worthy).

These films feature usually 4 short stories united by a common thread - maybe all the tales feature visitors to an antiques shop run by a creepy owner, or they're all on a train, or whatever - and often they see the future in their dream sequences and then realise some horrific truth at the end (like they're all dead anyway).

I have been trying for years to find this movie - I always remembered the staring into the shears bit but had no idea re the Greek myth reference back then! I last watched this filmaged 11 on a black and white telly, a treat to stay up and watch the horror movie on a weekend night! I remembered the last 2 stories for all that time - esp the piano one 0 SO clearly. Now THAT is memorable, effective cinema! Most modern movies I forget in a couple of hours.

The 2nd story is duff and unbelievable; the first typical Hammer-esque. But the last 2 stories are sublime. I have just watched it again and LOVED IT. So 5 stars from me!

Yes, it's dated and was at the time probably, but that is part of its charm.

even tho this film is old its a good film to watch reminds me of hammer house of horrors, classic scary music.

As films swell in length, it is always heartening to return to those portmanteau items where so much is brought within linked works, each of which fills some twenty minutes. Such is Torture Garden (1967) directed by Freddie Francis who had made Paranoiac a few years earlier. This time, now working in colour, he turns to good effect a script by Robert Bloch (best known for the novel upon which Psycho was based). This takes as its linking theme a fairground sideshow where a barker invites people to part with a fiver, in exchange for which Dr. Diabilo will reveal to them true horror.

And so some, confident of getting their money back if not satisfied, go inside. Beneath the canvas, the Doctor, wonderfully played by the versatile Burgess Meredith, invites each in turn to look at the open blades of shears in front of a still woman upon a throne. With which, the screen dissolves into a story which draws out their malevolent ambitions, none of which involve torture as such, let alone gardening.

The first and fourth are the best. In the first one a starring rôle is taken by a cat who has power over both Michael Bryant who is after the money which his uncle (Maurice Denham) has evidently concealed in a tumbledown house, complete – of course - with basement and all that entails (to make a double pun). That course to madness is captured convincingly. And the fourth segment is a lesson to anybody who has harboured thoughts of collecting things, on however modest a scale: that way madness again lies, as Jack Palance finds when his enthusiasm for Poe takes him to the house of Peter Cushing who has, somehow, amassed unknown treasures from the pen of an author who met a wretched end.

And it not all over yet.

A film which, if you are a holding a glass of wine, is enough to have you running to the bathroom, pulling off clothing and dousing it in cold water before the stain sets in.