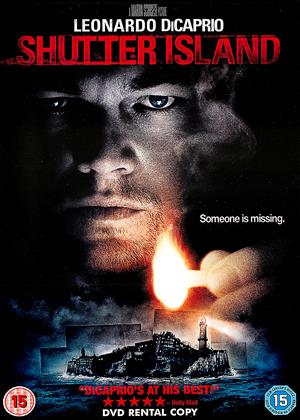 The pace, lighting and plot are gripping as Leonardo investigates the strange case of a missing patient in a secure unit on Shutter Island. How can a person disappear with the security systems being in place and on an isolated island? Everything appears to conspire against Leonardo finding out the truth. His paranoia is pervading. We were on the edge of our seats until the last minute. Brilliant performances by Leonardo and Kingsley. A haunting film which raises issues about mental health (e.g. at what extent are patients classified as mentally insane untrustworthy, is insanity a coping mechanism, what social support systems available to help patients with mental issues). I found this film moving, though-provoking and haunting. Brilliant- one of the best I have seen for 2010.

But every film he makes is cinema gold,and this is no different.

Expertly shot by Scorsese,this thrill a minute tale, of a remote island, thats homes the mentally ill, keeps you guessing right to the end.

Full of surprises,action,and things that make you jump out of your seat.

If you rent this,you will not regret it.

Loved this film - right up my street. Would never have guessed how it would end. Became extremely anxious for the lead character wondering if he would find himself in a situation which he couldn't get out of - and indeed he did but not how you would expect!! Really tense film where you were willing him to get away. Reminded me of the Saturday matinees at my local cinema back in the 60s where you would scream out at the screen warning your hero just to run as fast as they can. Well worth a watch.

A really great film - I'd watch it again. If you have seen inception and enjoyed it then you will definitely enjoy this. Is Teddy dreaming? Is anything real? You can guess but even the last frame will leave you wondering.

I thought the film wasn't a patch on the book. My gf and I had both read the book before watching the film and were both a little disappointed. I know it is usually the case where the book is better than the film, and I'm sure if I had watched the film before reading the book, I probably would have enjoyed it. I guess thats a risk you have to take! Leo was good as the main character and I thought they re-created several scenes very well. As with all films made from books though, so much was missed out. My advice, read the book, skip the film, unless you have a major desire to see it.

like a lot of these recent US super twisting thrillers, they essentially confuse themselves so much in trying to be clever that the only option for the final reveal is disappointing absurdity. time spent watching what is quite a good looking film is sadly wasted as the struggle for a ending becomes creeping in until the whole production panics and delivers a final 40mins through gritted smiles telling us the equivalent that all the baddies were aliens and it was all just a dream anyway.

but if it was on tv youd watch it and probably stay up to see the ending.

A quite confusing film which I found I really had to concentrate on, so not one to watch to relax really. Ending disappointing also. Very overated.

Shutter Island is one of the greatest modern mysteries being told, regardless of medium, length, or other variables as well. It’s just as Martin Scorsese took everything he knew from his visual storytelling experience, got one of the best novels (penned by Dennis Lehane) to be adapted by one of the greatest screenwriters (Laeta Kalogridis), gather some of the best Hollywood actors in their primes (Leonardo DiCaprio, Mark Ruffalo, Max von Sydow, Ben Kingsley, Jackie Earle Haley, John Carroll Lynch, Patricia Clarkson, and more) to craft one of the finest mystery experiences ever put to screen. And that’s not an exaggeration either.

The film stars off with detective Teddy Daniels (Leonardo DiCaprio) travelling by boat along with his faithful sidekick Chuck Aule (Mark Ruffalo) to uncover some kind of conspiracy in an Asylum on an uninhabited island (except for the asylum). As things usually go in these sorts of scenarios, this kind of an institution is always a symbol for dread and despair (and something gone really, really awry), and Shutter Island is no exception of this rule. Or is it? Right from the get-go, there is that underlying atmosphere that something is deeply wrong, but is it really the staff in the Asylum that’s gone bad, the patients, or perhaps the sole reality is warping around the main protagonist and his ideas of what ought to be?

Full stop. I’m not giving anything away in regards to the plot. Now let’s address the technical aspects of the film in full force.

Shutter Island is a film made with competence, grace, deliberate slow pacing, and deliberatively picked colors and light (including camera angles) to portray exactly what Scorsese wants the audience to think is going on. As the movie progresses, the changes in all of these departments becomes apartment to the point of being blatantly obvious, and this is precisely what the visuals make you think. Therein lays the true power of a talented filmmaker, who uses all of his tricks to make an experience of a lifetime.

The source material does not disappoint as well. It works on both levels too: micro mysteries and a big, giant macro mystery to engulf it all, including our protagonist Teddy Daniels. Who is Teddy? Why is he the man assigned to this particular case? Why is his companion Chuck Aule acting strange at times? Well, you have to watch the film to find out, because I ain’t telling nufhin’.

Shutter Island is a must-see for all ages and backgrounds, but it requires a tad bit of thinking to grasp the concepts as presented in the film. Kids would probably miss the major themes, as well as some adults, but the rest of you should be fine.