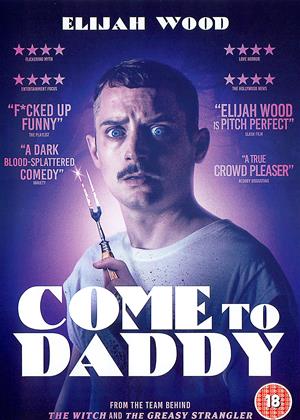 Reviews (3) of Come to Daddy

Who's the Daddy ? - Come to Daddy review by porky

Very Good. Will buy it on DVD when its available.

This film would be standard fare for the horror channel. and if you've seen that channel you'll know that most of its films aren't that frightening, are pretty cheap and often bloody. It's watchable, and has a plot that's not completely absurd but more plot and less gore would have improved it. If I had seen it (free) on the horror channel I'd maybe have given it 3 stars, but as a paid rental it's only 2.

This film starts pretty well, Elijah Wood travels to see his estranged Dad at the beachside. His Dad is drunk and rather rude, distant conversation takes place and some odd stuff then there is a surprise and the police get involved. It gets a bit black comedy and chugs along for a while then there is a major twist which I quite liked. After this all becomes clear and the second part of the story unfurls and we see Elijah Woods character get more violent fighting baddies all in a black comedy kind of way to the end. I can't say much more without spoilers.

The problem is that the acting is not all great by the supporting cast and the quality of the production is not that great. It's not terrible although it is as other reviews have stated a bit like a straight to TV Horror Channel kinda flick. When you see the twist you just want the film to get to the end in style but it then seems to slow down through the latter parts to the ending and it could be intense action-based.

I give it 2 stars for some originality and the twist - but it's not great. Maybe if you like Elijah Wood you might give it more...

Elijah Wood once more slides into a twisty horror perfectly suited for an actor who has mastered the fine art of acting astounded and bewildered by the world around him. In Come to Daddy, he plays Norval, a man in a silly haircut who has made a career in music. His father left him when he was five but he is finally going to meet his dad after so many years when he gets a postcard to meet him at his beachside residence. Norval is not prepared, however, for what he’ll discover when he arrives.

Norval’s father is at first welcoming but soon showcases just how bitter a man he really is. Norval mentions he’s a recovering alcoholic and his dad constantly mocks him with drinks. Norval speaks about how he knows many celebrities with his job and his dad calls him out as being full of himself with a cruel trick involving name-dropping Elton John. Something doesn’t seem right here as Norval keeps asking himself why his dad is so bitter and hostile towards him to ask him out to his place.

Soon, things go from bad to worse when dad turns more violent and horrifying secrets are revealed within the house. Without giving too much away to preserve the genuine thrill and surprise of it all, I can’t say too much about what Norval uncovers. What I can say is that his story takes more than a few wild twists that blindside him at several turns. He’ll not only find himself trying to defend himself from people trying to get him but forced to make tough calls with revelations that’ll force him to kill. And every kill is a giddy bit of gross-out gore. As an example, one scene involves Norval in a kitchen defending himself from a killer with no pants on. You can pretty much guess where he’ll stab. Even the dialogue is extra gross, as when Norval encounters a victim who says that the killers forced him to either eat his ear or drink a certain substance. Norval, despite being freaked out by all of this, can’t resist taking this time to state that ears don’t have much nutrition.

The whole film has this brilliant and surreal absurdity that echoes the allure of David Lynch. Certain characters with seemingly small roles always seem to have something strange and profound to state. Norval will meet a police officer for one scene who states he may be breaking the fourth wall by describing the look a killer usually gives off, presented in a manner that never quite feels to meta but certainly strange.

This viciously delicious thriller comes from Ant Timpson, making his directorial debut after such rollickingly ultraviolent pictures as Turbo Kid and Deathgasm. Similar to those films, Timpson manages to provide a brilliant balance of the emotional, the horrific and the tongue-in-cheek humor. The results are quite effective, always giving off an uneasy vibe throughout while still being about the story of one man trying to reconnect with his father. However, I must admit that after those past films, Come to Daddy seems to more or less plateau in its second act. After so much carnage the craziness almost becomes expected that when we get to the climax of a hotel orgy and an unorthodox car crash, it’s par for the course. Still moving and still engaging but somewhat settles with few surprises as the picture goes on.

All things considered, I had a lot of fun with Come to Daddy’s dark balance of humor and horror that continues to spin a strangely compelling thriller. It dabbles in so much family drama and grotesque situations while still tapping into something more moving than just how Norval will escape someone trying to rip open his insides. It’s a brutal thrill of brashly inspiring filmmaking that is hopefully the start of a long career for the creative and experimental Timpson.