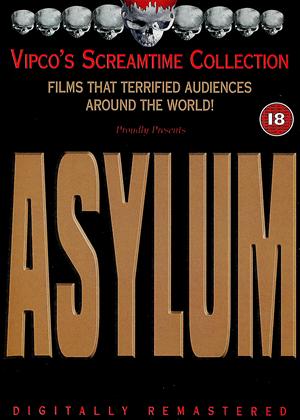 ‘Asylum’ is an anthology film from the Amicus Company, based on stories by Robert Bloch.

Rutherford sets Martin a task. If he can identify former medical specialist Dr Starr amongst the inmates, the position is his. He has to visit a selection of cases – first, guided by the orderly Reynolds (Geoffrey Bayldon, in a role for which Spike Milligan was also considered), he meets Bonnie (Barbara Parkins). What follows in ‘Frozen Fear’, is that Walter (Richard Todd) and Bonnie agreed to dismember Walter’s wife, occult practitioner Ruth (Sylvia Syms) and live off her money. Despite this, she escapes from the freezer into which her various body parts have been stored, and her assorted limbs, head (which is still breathing) and torso, carefully wrapped in brown paper and string, attack first Walter and then Bonnie … apparently (we see this in flashback, and it is one of this film’s greatest and most effective scenes. It is intentionally horrific and hilarious, perfectly balanced). This is Bonnie’s story, but she has no proof, only gaping wounds on her face where she axed her alleged attacker/s. Chances are, if you have seen this film, then the scene of the dismembered limbs scuttling across the floor is what will stick in your mind.

‘The Weird Tailor’ is next. Barry Morse plays Bruno, a struggling tailor who accepts an order from ‘Mr Smith’ (Peter Cushing) to create a suit made from special material, and to work on this at specific times over four nights. Smith promises a great deal of cash, but when the suit is delivered, is revealed to live in a house empty of furniture: Smith is penniless. Both actors are at a peak here and ably supported by Ann Firbank as Bruno’s wife (Bruno is a lot more sympathetic here than in Bloch’s original story and our sympathies are with him throughout as a result). Even the (enjoyable) silliness at the end of the episode doesn’t detract from its deep sense of melancholy and longing. Directed often in close-up, the squalidity of the two men’s desperation is expertly conveyed. This is not only my favourite segment from ‘Asylum’, but from any Amicus production.

Any tale that follows that would be hard pressed to match it, and sadly ‘Lucy Comes to Stay’ (originally planned as the first instalment, but moved to third place at Producer Milton Subotsky’s insistence) is the weakest of the three. This is by no means a bad story, the climax nevertheless shares similarities with ‘Frozen Fear’. It contains a terrific cast including James Villiers, Charlotte Rampling, Megs Jenkins and Britt Ekland.

Another Doctor – Doctor Byron – features next. Played by the always brilliant Herbert Lom, Byron has created tiny mannequins based on former colleagues of his. ‘These are not ordinary figures’, he explains, and goes on to explain that each figure is living and perfectly capable of functioning. He can bring them to life with his ‘conscious’, and his final model is based on himself. Absurdly (the viewer has to go along with this for it to be effective), this last mannequin travels downstairs and kills Doctor Rutherford, who is responsible for Byron’s incarceration.

And yet who is the elusive Dr Starr? The answer is brilliantly directed by stalwart Roy Ward Baker. It is the Bayldon’s orderly. Starr killed the original Reynolds, and does the same to Dr Martin. We finally see him as he truly is, frighteningly deranged, holding a stethoscope to Martin, cackling furiously, an insane child-like laughter. Bayldon is terrific throughout. Often a player of secondary characters, he is unassuming and courteous – and that is why the reveal is so very effective.