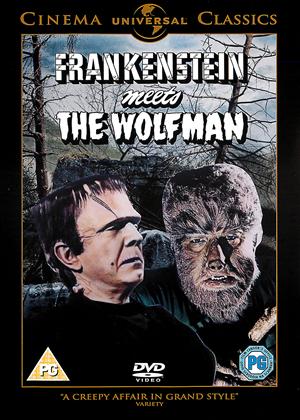 Reviews (1) of Frankenstein Meets the Wolfman

In a celebrated opening scene, two grave-robbers scamper over an impressive night-time cemetery scene, into the tomb of the Talbots. They plan to steal valuables from the corpse of Laurence Talbot (Lon Chaney Jr), four years dead – and see the plaque bearing the rhyme: ‘Even a man who’s pure of heart, and says his prayers at night, may become a wolf when the wolfs bane blooms, and the moon is full and bright.’

As the camera reveals, that night boasts a full moon. Not only that, but removing the wolfs bane appears to bring Talbot back to life.

It doesn’t matter that Talbot’s left hand reaches out of the tomb for one of the grave robbers, Freddy (Cyril Delevanti), and yet the hand that grabs him is revealed to be his right. It doesn’t matter that the Welsh village of Llanwelly is peopled with Scots, cockneys and Americans, but no Welsh. It doesn’t even matter that Talbot, in his white nightwear, changes into a black shirt and trousers-sporting Wolfman and then back again. Because, despite the first two Universal Frankenstein films being my favourite movies ever, this is the most ‘fun’ of all the entries. And yet, the finished picture could have been so much different.

As at the end of the previous ‘Ghost of Frankenstein (1942)’, The Monster has Ygor’s (Bela Lugosi) brain in his head, and speaks with his voice. After considering using Chaney to play both Wolfman and Monster (both roles he had played before), it was decided subsequently to use Lugosi. Scriptwriter Curt Siodmak wrote dialogue for the Monster (“Help me to get up ... Once I had the strength of a hundred men … it's gone ... I'm sick …”), but at a premier, studio executives found a talking Monster hilarious (displaying a lack of memory and imagination, it seems) and all dialogue, and scenes including it, was cut. There’s a POV that says the Monster’s dialogue was removed because it sounded too much like the rantings of Hitler. Siodmak says Lugosi’s accent made the words too ‘Hungarian funny’. A little ungenerous of him. Also cut were references to the Monster’s blindness, and the restoration of sight and strength at the film’s climax.

Lugosi, who was over 60, suffered from exhaustion during filming, and reportedly collapsed on set at one point. This is the main reason extensive use was made of stuntmen to double for him.

So, does Frankenstein actually meet the Wolf Man? Yes, she does. Ilona Massey, lovely as Baroness Elsa Frankenstein, is visited by Talbot, who is desperate to find her father’s books, believing they can help rid him of his lycanthropic curse. Talbot is a morose, moody figure, a far cry from the buoyant flirt from his first outing. Lugosi’s much criticised Monster, is a spitting, snarling thing. His uncertain stretch-armed stiffness seems over-the-top with all explanation for his blind groping removed – none of which is Lugosi’s fault. He is the wrong shape for the Monster, and Jack Pierce’s make-up (a make-up designed for more slender features) but is performance does not deserve the criticism it gets; he breathes life into the creature, more so than Chaney did in the previous instalment.

Lon Chaney is excellent as Talbot, in what is essentially his film (with the Monster’s role sadly reduced). He is intense and brought low by his predicament, and Chaney does a good job of some exposition-heavy lines.

The rest of the cast comprise of stalwarts Lionel Atwill, Dwight Frye and Patric Knowles as all-rounder Doctor Mannering. Beginning the picture as the doctor tending to Talbot, he then becomes an investigator who follows him to Vaseria and finally, for no particular reason, the mad scientist who cannot resist bringing the Monster to full strength before the tremendous and hugely entertaining final battle.