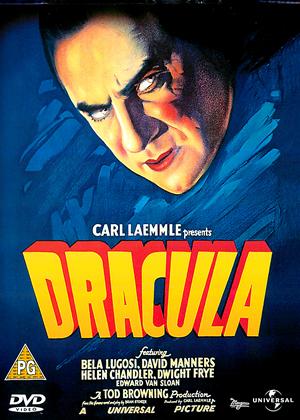 This first ‘sound’ horror film opens with some stunning graphics. For years, silent films only had visuals to tell their story, so already the art of matte painting used as backgrounds had been implemented successfully. So as Renfield (Dwight Frye) makes his way by carriage through the Universal films backlot, it is transformed, very impressively, into Transylvania! The first words spoken are from Carla Laemmle, niece of studio founder Carl Laemmle (she died as recently as 2014 aged 104).

After local murmurings of vampires and Walpurgis Night, the camera allows us inside the dusty basement of Castle Dracula, where small animals scamper away as a selection of coffins betray their supernatural hosts. Three somnambulistic women and one man are revealed in near silence. These are beautiful, classic horror scenes. Dracula moves but rarely speaks. When he does, it is to welcome Renfield and then glides up a colossal stairway leaving his somewhat fey guest scrabbling through outsized spider’s webs.

Bela Lugosi had been playing Dracula on stage for some years and by 1931 made the role his own on film. It was a sensation. For a few months, he was an undisputed movie superstar, a horror icon. This story – which he described as a blessing and a curse – would be mentioned in virtually every interview and article about him until his death. He is magnificent, alien and captivating in these opening moments. The first time you see him, you notice how theatrical he is. When you watch him again, he is never quite as theatrical as you remember. He moves slowly, like a hungry lizard and is at one with the thick, macabre, frightening atmosphere – when he is removed from that, however, his performance takes on an anachronistic aspect.

After an opening that is as near perfect as any in horror, Renfield loses his mind and is presided over by Martin, a warder at the sanatorium, (a truly grotesque, comedy-mock-cockney character who refers to his client as a ‘loonie’) and the horror is restricted almost entirely to Dracula’s persona (on the rare occasions he is on screen) because the action is placed very much in the (then) present day. From here, it seems very much that we are watching a filmed theatre production, a drawing room drama. The camera barely moves, performances are very crisp and clear and static. The heroine Mina (Helen Chandler) is a meek, fragile, bloodless thing (perhaps The Count prefers subordinate females to Frances Dade‘s feistier Lucy) and her beau (David Manners) is even wetter. Of course, it is easy to note the difference in filmic styles from over 80 years ago – but ‘Dracula’ has dated less well in this respect than other films made during this era.

As The Count is staked by Edward Van Sloan’s Van Helsing, it is off-screen. We hear a groan (trimmed on the insistence of the censor) and it is rather anti-climactic. One would have hoped that any sequel would give Lugosi’s Dracula a more memorable send-off. What a shame it was with Abbott and Costello, 17 years later.

Horror was a largely unknown genre in 1931, so Universal’s trepidation was understandable. Whilst Lugosi approached his role with full-blooded confidence, it’s a pity the studio didn’t do the same.

Count Me Out! - Dracula review by Count Otto Black

Strangely enough, despite being a fan of old horror movies (the good ones, anyway - and the bad ones if they're fun), I'd never gotten around to seeing this until now. It didn't seem to be on TV as often as all the other "classics". I've just found out why: it's bloody awful! The opening credits (inexplicably accompanied by an excerpt from, of all things, "Swan Lake"!) announce that it's adapted from a stage play, and that's painfully apparent throughout. The camera seems to be rooted to the spot, which perhaps it was, since early sound cameras were extremely bulky, and many things that might be tricky to show in a cinematic context are described rather than shown, sometimes by people reading from newspapers or literally pointing offscreen. Likewise, nothing the slightest bit nasty is directly shown; this has to be the only version of "Dracula" in which the poor Count doesn't even have fangs! Which is especially wimpy when you consider the feral dentition Max Shreck was equipped with in 1922's "Nosferatu".

There are no genuinely good performances whatsoever, and that includes Bela Lugosi. Think about this for a moment. The iconic Frankenstein Monster will always be the pitiful man-child with bolts in his neck who doesn't know his own strength played by Boris Karloff, and not even Robert DeNiro could steal it from Boris, because those old Universal Frankenstein movies (well, the first two at least) still pack a punch today. But Lugosi's Dracula? Nowadays he's the template for the wacky comedy vampire with the hammy Hungarian accent who wouldn't scare anyone over the age of five. Now, Christopher Lee's Dracula, on the other hand...

The scariest moments in this incredibly tame and leadenly directed "horror" film, as well as the least worst acting, are provided by Dwight Frye's Renfield, who's supposed to be a minor supporting character. I think Jack Nicholson may have been thinking of him when he starred in "The Shining". But those moments are few and far between. As for Lugosi, depending on which source you believe, he may or may not have been entirely fluent in English when he made this movie, but judging by his performance, I'd say there were definitely times when he forgot what his lines meant and memorised them phonetically. By the way, the trick used here of making Lugosi's eyes glow by pointing a floodlight at his face and interposing a sheet of cardboard with two perfectly placed pinholes was later used by Ed Wood, after Lugosi explained to him how it was done. The interesting thing is that Ed Wood, allegedly the world's worst director, understood that the two spots of light were supposed to line up with Bela's eyes. Tod Browning seems to have either failed to grasp this incredibly basic point, or simply couldn't be bothered.

Seriously, I'd give this feeble heap of armadillo faeces one star if it wasn't a cinematic landmark in its own half-assed way. But if you want to see Bela Lugosi at his best, you'd be far better off renting "White Zombie".